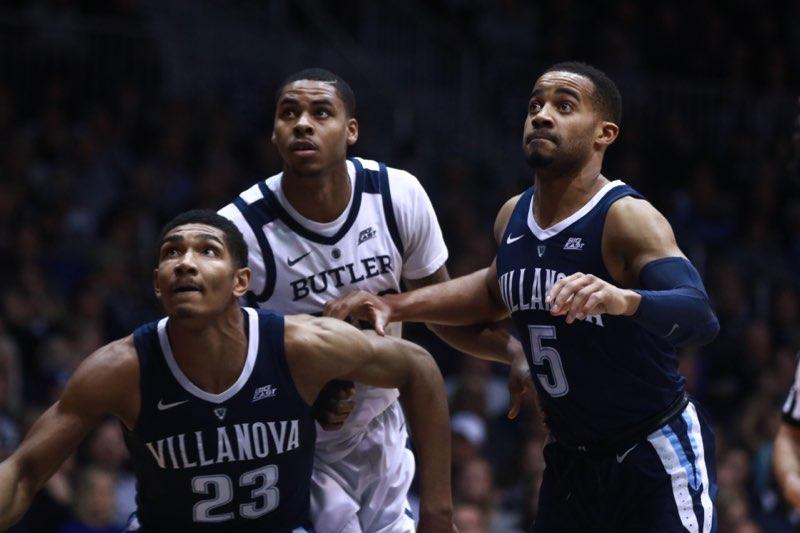 Henry Baddley battles for positioning against Villanova. Baddley was held scoreless in the loss. Photo by Jimmy Lafakis.

The Butler men’s basketball team fell to Villanova at home for the first time in three seasons, 80-72. Butler was outscored by four points in both halves. Here are three takeaways from an unsurprising loss.

1. The Bulldogs did the little things extremely well for 20 minutes.

Step one to defeating the Wildcats is taking care of the basketball. Jay Wright’s teams are incredibly intelligent and will capitalize on the mistakes their opponents make. Butler committed a single turnover in the first half and dished out eight assists. The Bulldogs were only called for five fouls in the opening 20 minutes. Butler’s attention to detail kept it within four at the break despite 27 points from Eric Paschall and Phil Booth.

The second half was a different story. Butler turned the ball over eight times while only recording five assists. Villanova got 11 points off those turnovers. When the Wildcats shoot 46 percent from three and are forcing opponents into mistakes, they’re nearly impossible to beat. Unlike the past two times these programs met in Hinkle, Villanova was the better team in the second half. This wasn’t a bad showing from Butler by any means. It just wasn’t good enough to take down the Wildcats.

2. Butler didn’t take anybody away.

Paschall started 5-of-7 from the field and 4-of-6 from three. Booth got to the free throw line seven times in the first half and hit six of them. He already had 13 points, four assists and three rebounds by halftime. Together, the two seniors combined for 24 of the Wildcats’ first 33 points. Their points came at crucial times too. When Jordan Tucker hit a three to tie the game at 21, Paschall responded with one of his own on the next possession. After Aaron Thompson’s layup cut Villanova’s lead to one, Booth nailed a three to give the Wildcats a four-point lead at the break.

Paschall and Booth finished with a total of 40 points on 43 percent shooting. Collin Gillespie added 11, Saddiq Bey 10. Dhamir Cosby-Roundtree and Joe Cremo combined for another 17. Butler had a 27-17 edge in bench points, but when Kamar Baldwin goes 5-for-14 from the field and Thompson’s 15 points are a team-high, it’s irrelevant. Depth was the one area the Bulldogs held a significant advantage coming in. To win this game, Butler needed to slow down Booth and Paschall or everyone else. Neither happened.

3. Butler’s bigs showed up, except for on the boards.

Joey Brunk and Nate Fowler provided 14 points on 6-of-8 shooting, but that doesn’t begin to do their performance justice. They were aggressive in utilizing their size advantage, which has not been the case most of the season. Brunk and Fowler also put their passing ability on display, although it didn’t always directly translate into points. On the defensive end, they were instrumental in establishing Butler’s 34-28 edge in paint points. This was far and away their best outing since Big East play started.

The one area Brunk and Fowler really struggled was on the glass. Butler got outrebounded 30-28 and gave up nine offensive rebounds. Some of those were a direct result of Brunk or Fowler getting beat by smaller Wildcats. Villanova got nine second-chance points in the second half alone. Those points make a massive difference in a game that comes down to a handful of possessions. All things considered, LaVall Jordan has to be ecstatic with how his big men played. The question now becomes whether they’re capable of performing at this level consistently.