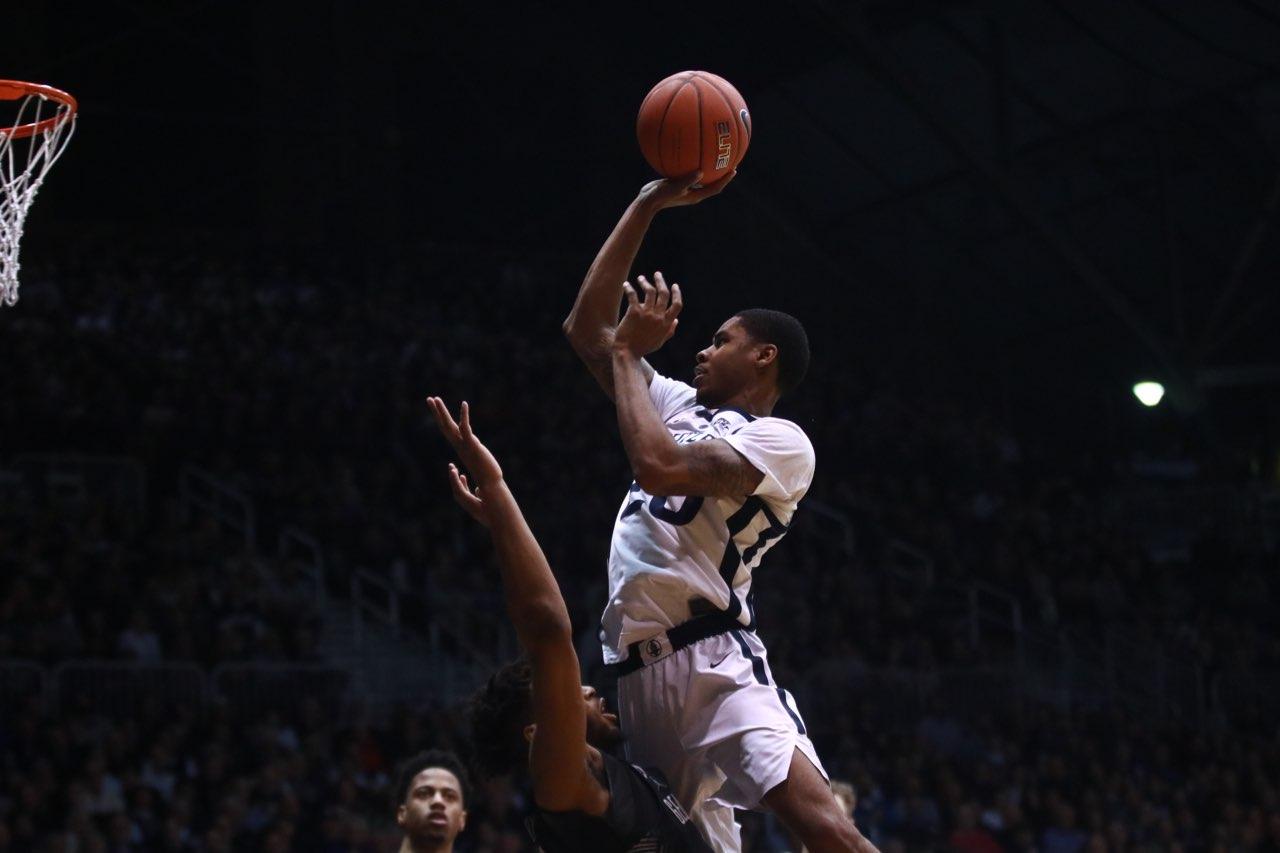 Henry Baddley goes up for a shot. Baddley scored 14 points in the loss. Photo by Jimmy Lafakis.

The Butler men’s basketball team opened up Big East play with a 84-76 loss at home to Georgetown. Butler fell behind early and never led after the 6:59 mark of the first half. Here are three takeaways from the Bulldogs’ second defeat in as many games.

1. Butler’s defense set the tone for this game.

The Bulldogs’ perimeter defense was nonexistent to start the game, resulting in the Hoyas making seven of their first eight shots, six of which came off assists. They also connected on three of their first four 3-pointers and jumped out to a 22-12 lead. Butler got its issues sorted out temporarily and Georgetown missed seven of its next 10 shots, allowing the Bulldogs to go on a 15-2 run. Then the poor defense returned. The Hoyas opened the second half 8-of-16 from the floor and extended their advantage to 12.

Almost without exception, the flow of this game could be traced to how effectively Butler was guarding. The Bulldogs would pick up the intensity and cut into the deficit, only to get lax again and have the Hoyas build their lead back up. Georgetown, and specifically Greg Malinowski, who scored 26 points on 10-of-12 shooting, wasn’t making difficult shots that were impossible to guard. The Hoyas just capitalized on the Bulldogs’ defensive deficiencies. Butler needs to make some significant adjustments to its defensive game plan after giving up 161 points in its last two games.

2. The Bulldogs’ bench was the biggest bright spot.

Henry Baddley’s 12 points were the most of any Bulldog and tied for the most of any player through 20 minutes. Butler entered halftime with a 19-5 edge in bench points despite a scoreless half from Jordan Tucker. The Bulldogs ended up outscoring the Hoyas 31-17 in bench points and Baddley finished with 14 on his own. It should also be noted that Tucker and Bryce Golden had a combined plus/minus of 10 and were the only two Bulldogs with positive ratings. Joey Brunk’s 11 points and six rebounds were a massive boost as well.

As Tucker becomes more comfortable with his role and Golden gets more minutes under his belt, Butler’s bench could very well end up being one of the team’s best assets. There is also no reason for LaVall Jordan to change his starting lineup simply because his reserves are playing well. The current starters compliment each other nicely and are used to playing with one another 14 games into the season. The Bulldogs’ bench will win them at least a game or two if it continues to perform at this level.

The Bulldogs nearly reached their season average of 10.5 turnovers in the first half, coughing the ball up 10 times. This also marked the third time in four games that Butler committed at least 13 turnovers.  It set a new season-high with 15 and only dished out 13 assists. Of the teams’ seven assists in the first half, six of them came from either Kamar Baldwin or Aaron Thompson, who should not be the only ones creating shots for their teammates. No team is winning Big East games on a regular basis with an assist-to-turnover ratio under one.

Georgetown was only able to generate 19 points off Butler’s turnovers, so the consequences could have been much more severe. The Bulldogs can’t afford for one of their strengths up to this point to become a weakness during conference play. They’ve hovered around the top 10 nationally in turnovers per game most of the season. To have any shot of competing for a Big East title, they need to stay there.