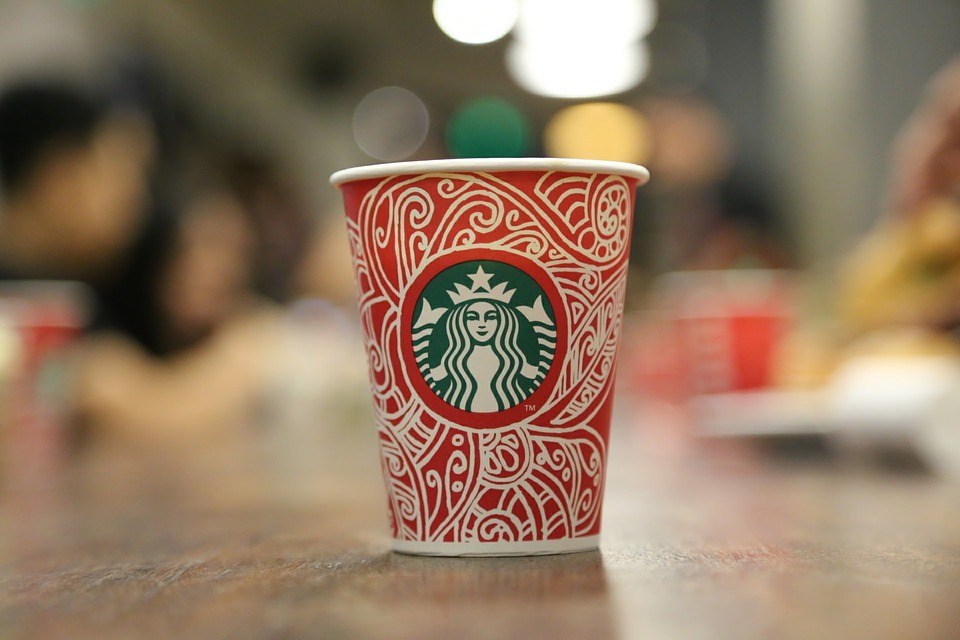 Instead of a paper cup, use a reusable travel mug at Starbucks, cut down on waste! Photo courtesy Wikimedia Commons.

One of the best parts about Christmas — or just the holiday season in general — is the weather. Cozy fireplaces, warm drinks, and the cuddliest of blankets make everything better. Although if you’re from Indiana or somewhere where it snows, you may remember that putting on your snow pants as kid was about as close to a living nightmare as it got.

There was definitely a strategy involved in putting on your battle suit for an absolutely epic snowball fight. A seasoned snowball fight veteran always knew it was long socks first and then the pants, so the snow wouldn’t get up your pant leg. You also had to be the first to grab the gloves that would pack the perfect, rock-solid, injury-inducing snowball. Survival of the fittest, folks.

Before the snow falls and the sleds come down from the garage shelves, though, there’s fall. All those “feet in a pile of leaves posts” really get me going, as well does the annual Bath and Body Works fall candle sale. I’m also just a sucker for a good blanket scarf.

For a second though, put all that on hold and pretend all of this was gone. No snow. No pretty changing leaves. No snowmen. And worst of all, no more renditions of “Baby It’s Cold Outside.” All the things that make winter what it is, gone because our environment has been altered so drastically.

I hate to break it to you, but climate change is very real. And no amount of #winterwonderland Instagram posts is going to change the fact that we have limited time with our beloved snowy landscapes and tinseled trees.

Global warming is exactly what it sounds like. The temperature of the Earth’s atmosphere is increasing due to a rise in the emission of greenhouse gases. It’s not only rising, but rising rapidly, which poses a laundry list of problems for our present and very near future.

At the end of the day, we have no one to blame but ourselves. We haven’t paid enough attention to how our actions affect our environment and we are going to pay the price unless we try and preserve what we have.

Erica Walters, a sophomore double major in human communication and organizational leadership and psychology, said between Indiana and her home state of Colorado, there are major differences in how people view sustainability and their environments.

“There is such a heightened awareness of how to deal with those things [in Colorado],” Walters said. “I think it is partially the exposure to so many beautiful natural outdoor areas because that is part of the lifestyle there.”

Our proximity to these issues influences how much we care about them. Imagine having a landscape as awe-inspiring as the Rocky Mountains in your backyard. You would definitely want to protect it.

The reality of the situation is that we are responsible for what happens to us when it comes to the environment. All of our actions collectively have an impact on how we live our lives and what happens in the future.

Think about it this way: The excuse of not taking care of the environment because we aren’t privy to it every day is like not voting because it “doesn’t affect us.” People see it as not their problem, when in fact my friends, it is very much our problem.

We have all heard that climate change is a big deal. But what does climate change really mean for the future of our planet? According to the Climate Science Special Report, global warming does and will affect everything in the United States from the intensity and frequency of rain to the growing seasons of various plants.

The research, data, and conclusive evidence is on multiple platforms spanning the entire globe. Simply Googling “global warming effects” will produce hoards of articles and studies all saying the same thing: we need to do something about this. Now.

By recycling as much as we can, and reducing the amount of packaging that we use across the board, we can prevent further damage from occurring. Recycling saves resources and energy which in turn reduces that amount of greenhouse gases emitted.

Global warming is also seriously threatening some Christmas icons. Our beloved reindeer have been losing weight at an alarming rate due to a severe food shortage. Temperature increases have been killing many of their food sources, making competition fierce and winters tough, and personally I’m worried they won’t be able to pull Santa’s sleigh. If that isn’t tragic, I really don’t know what is.

Regrettably, it is too late to reverse the damage that we have already caused, but it is possible to reduce what we experience in the future. One of the very simple ways that we can make this change is through recycling and being aware of what we do with our waste on our way out the door.

A prime factor in holiday waste is all the Amazon packages you might be ordering this holiday season — they all come in cardboard boxes that can be recycled or reused. Festive wrapping paper, as long as it isn’t metallic, glittered or velvet-covered, can be recycled as well.

Starbucks also finally has their holiday drinks! Along with everyone else who loves the Gingerbread Latte, I’m screaming internally. Since I’m going to be buying approximately five million this holiday season, I want to reduce the amount of cups I’ll be using because, fun fact, Starbucks cups on their own are not recyclable.

The wax coating on the inside of the cups prevents them from being tossed into recycling. Instead, they are condemned to the “landfill” side. Although piles of festive Starbucks cups may look pretty, you’ll be channeling some seriously big Grinch energy if you’re sentencing them all to the landfill. Also, you get 10 cents off if you bring your own cup!

The production of all of these things emits greenhouse gases, which are slowly deteriorating the environment and raising the Earth’s temperature. Unfortunately, this has been happening ever since the industrial revolution, and only now are we starting to see some serious aftermath.

Our hearts really should grow three sizes this holiday season. We are all in the fight for the environment whether we want to be or not. I encourage you all to think about how your actions impact the world around you, because one small action can really make a difference.

Don’t be a cotton-headed-ninny-muggins, be aware and keep this world beautiful for many holiday seasons to come!