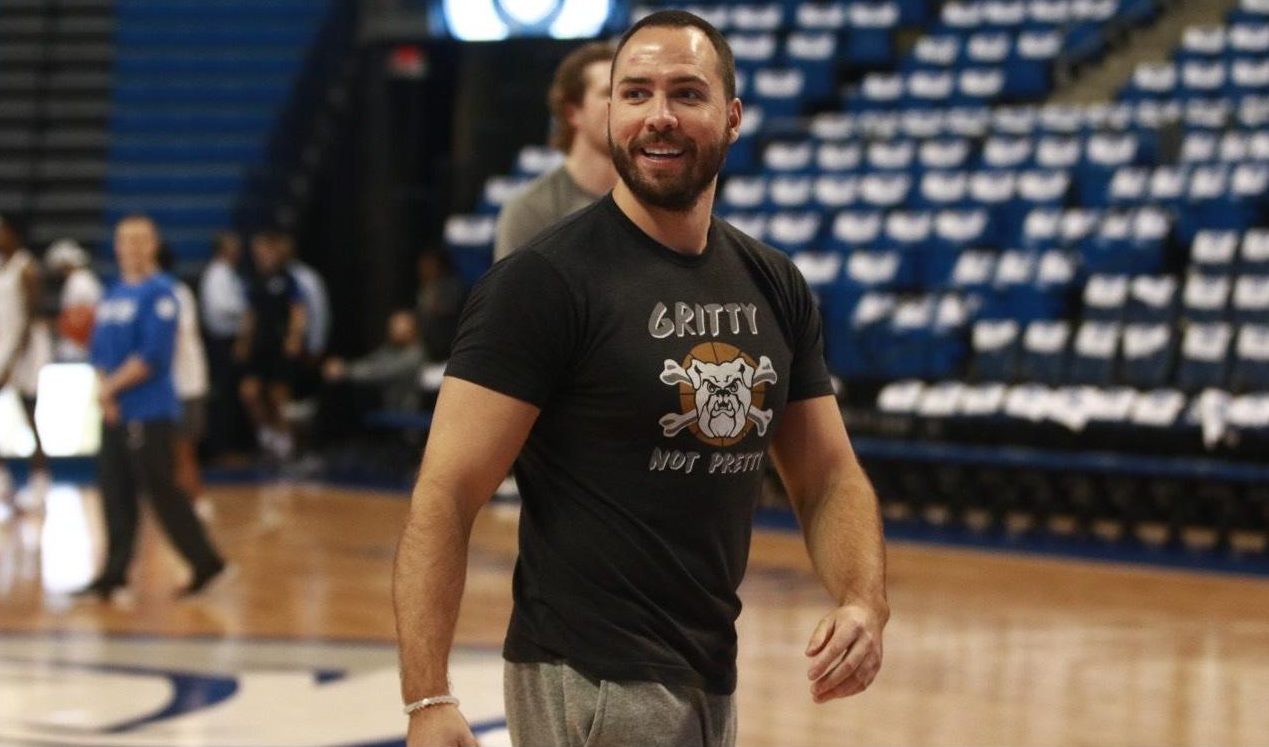 Matt Johnson spent his 2018 Fourth of July holiday taking in the ocean breeze in Cape Cod, Massachusetts. His girlfriend, Katie, has a beach house on the Cape. They spent quality time relaxing by the Atlantic Ocean while Johnson prepared for his next mission.

In a few days, he would move from Maryland to Indiana. Johnson was hired as the team’s strength and conditioning coach in June after spending five seasons at George Washington University. He arrived at Butler shortly after his vacation and met with players in the film room.

“We should be hungry,” Johnson told them at the time. “People are doubting us right now.”

Johnson recognized that doubt in his prior research. While on vacation, he found preseason rankings for Butler’s upcoming season. He decided to use those predictions as a motivational tool. That tool morphed into a hashtag, #HungryDawgs.

The coach started using the hashtag on social media. Soon, players, coaches and fans included it in their posts.

“If it’s a 30-second drill, we go for 31 seconds,” Johnson said. “If it’s eight reps, we don’t quit at seven. If it’s a drill that one of your teammates is tired and exhausted from, we expend our energy to pick that person up off the ground.”

The Bulldogs bought into Johnson’s brand.

“He came in with a plan,” junior guard Kamar Baldwin said. “He held everyone accountable to it. He told us that it was not going to be easy, but he has helped us through it all.”

To truly understand why Johnson is so fiercely passionate about his work, you must go back to his roots. He played college basketball at Division-III Marywood University in Scranton, Pennsylvania.

“We were eating Taco Bell after games,” Johnson said. “We wouldn’t stay the night before a game and travel the day before. We would travel the day of. We would get on the bus, get off and just play. Our gear was from the local sporting goods store.”

Johnson said his initial love for strength and conditioning has only grown over time. When he steps foot inside the weight room, the players feel his presence.

“He’ll come in and just flex on everybody,” sophomore guard Campbell Donovan said. “Out of nowhere.”

Johnson likes to implement a plethora of workouts. At George Washington, he and the Colonials’ strength and conditioning staff assigned boxing workouts to the team.

He brought those unconventional ideas to Butler. He brought in a DJ, Marc “Mr. Kinetik” Williams, to blast the players’ favorite tunes during a workout. Most recently, Donovan and freshman forwards Bryce Golden and Markeese Hastings joined their coach for friendly games of Spikeball on the beach before their official Battle 4 Atlantis showdowns.

“For me, it’s always been about family and the relationships,” Johnson said. “During the season, we spend more time with these guys than we do with our family, with our blood. Having that helps with working together, cohesiveness and team unity.”

The family committed early, and the labor’s fruits are ripe. The Bulldogs’ summer grit and tenacity has translated to games, perhaps none more so than a particular play during the November contest against the University of Mississippi.

With just over five minutes to play, the Bulldogs trailed 68-66. Mississippi’s center Dominik Olejniczak received the ball in the paint. The 7-footer went airborne, hoping to squash Butler’s run.

Six-foot-seven-inch sophomore forward Christian David served as Butler’s last line of defense. David slid over to contest the potential dunk and rejected any hope of a slam. Baldwin knocked down a mid-range jumper at the other end, and the Bulldogs tied the game.

The turning point in last night's win! Christian David's block in the midst of a 16-2 run that turned a 68-63 deficit into a 79-70 Butler lead. pic.twitter.com/08uQWkfRJ5

Butler went on to win 83-76. In dogfights like that, plays like David’s block make a difference. Those grueling summer days spent in Hinkle Fieldhouse and on the Sellick Bowl have manifested into on-court successes.

Most of the Bulldogs learned about the blueprints, hammers and screwdrivers just five months ago, but one Butler player was previously schooled in Johnson’s art of construction. Redshirt senior guard Paul Jorgensen spent two years with the coach at George Washington before transferring to Butler.

“He’s a beast,” Jorgensen said. “During the summer, a lot of our workouts were high-intensity with high reps. Everything was super-intense. It definitely has paid off.”

Johnson said he has always been vocal in highlighting student-athletes’ work.

“The game is won before it’s played,” Johnson said.

The routine is a grind. Before Johnson, the program never had a strength coach of its own.

“When I’m out there, I feel more confident,” Donovan said. “I know my body has changed.”

Now that the 5-2 Bulldogs are competing in the thick of nonconference play, Johnson said he recognized his role during games.

“My one job during the game is to not spend a lot of time sitting down,” he said. “I like to flex on the sidelines and be animated. Big block, big dunk, big 3-pointer, diving on the floor for a 50-50 ball. That’s what we work hard for. My job is to be the biggest cheerleader.”