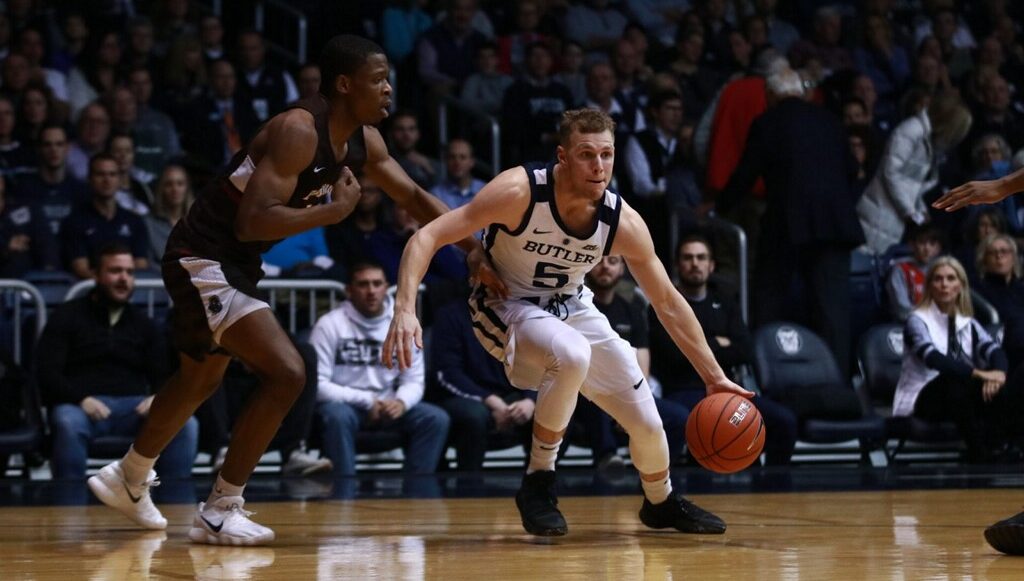 Paul Jorgensen looks for an open move during Butler’s 70-55 win over Brown on Dec. 5. Jorgensen led Butler with 19 points in the game. Photo by Jimmy Lafakis.

The Butler men’s basketball team bounced back from their road loss to Saint Louis, defeating Brown 70-55 at Hinkle Fieldhouse on Dec. 5 to move to 6-2 on the season. Here’s a quick look at five key quotes from after the game.

On his team’s uncharacteristic lack of free throws: “They made it hard for us to get it in the paint. A lot of our free throws come from paint touches. They do a really good job of building a wall [around the paint].”

On rebounding from the team’s loss to Saint Louis: “It was good to be back in competition against somebody else. When you drop one you want to get that taste out of your mouth as quick as you can. … I think we learned from it in St. Louis. It [is] always great to be back in Hinkle and get a lift from our fans.”

On Butler’s overall performance: “I think we came out strong and executed well on both sides of the ball out of the gate. Didn’t like … it went a little flat there in the middle of the second half. … In the second half, give coach Martin credit, they made some adjustments, got some easier looks, and so they scored a few more points, which didn’t allow us to get out in transition like we had in the first half.”

On the team’s defensive effort: “Ball pressure was better. I think when we’re operating in the way we want to on the defensive side of the ball, we’re able to have some pressure on it without getting beat. I thought we did a good job of that in the first half. In the second half we relaxed, and now they could throw some zipline passes and they got some drives. Our pressure wasn’t as good in the second half.”

On his 19-point performance: “I think my teammates found me in the second half. I kind of got it going. … I guess I was just in rhythm that second half.”