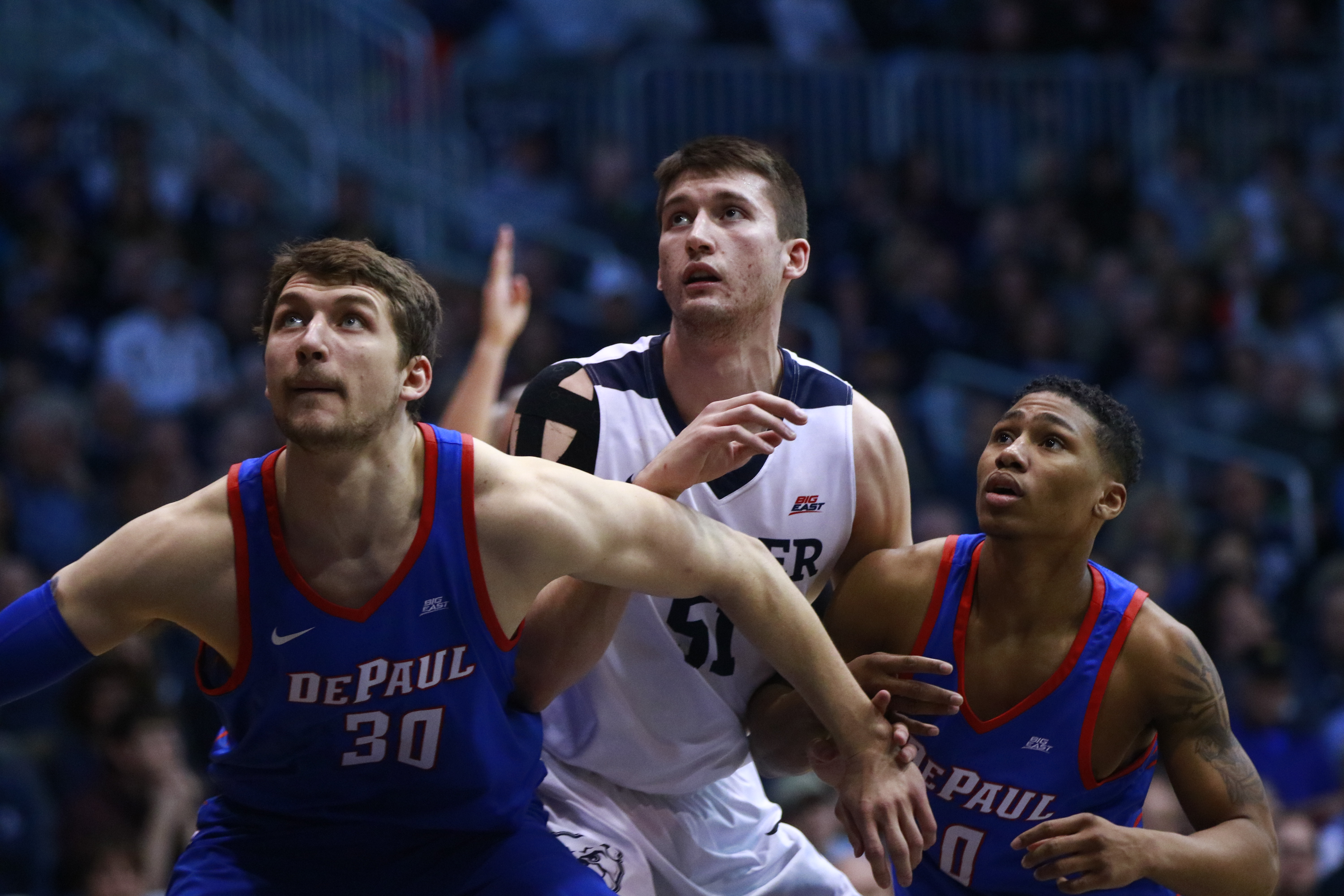 Here is the program-defining stat: Each of the last four years, Butler has earned an NCAA Tournament berth and won at least one game in March. Butler is one of only eight programs in the country to accomplish that feat. The Bulldogs secured a Sweet 16 appearance in the 2016-17 season, and the team has consistently won with two different head coaches at the helm.

I say that to say this. Butler will go to the tournament this year. Death. Taxes. Butler in March. The Big East is not as strong as it was last year. It is easy to focus on what Butler lost, but I would rather appreciate what the Bulldogs have. Kamar Baldwin is a star, and I think people are overlooking the depth of this roster. Players are stepping into new roles, but this iteration of the Bulldogs is an experienced one. The Battle 4 Atlantis will be critical for Butler’s resumé. It is imperative that the Bulldogs leave Paradise Island with a winning record. Not even a month after they return, Jordan Tucker will become eligible. He adds a different dimension to this team.

You might see this as a scorching take, but I think Butler will finish in the top three in the Big East. The hometown team will go dancing on the national stage. I might be crazy, or I might know that the Bulldogs succeed again and again, no matter how overlooked they are.

This team should finish with a winning record in conference play and make the NCAA Tournament for a fifth straight season. LaVall Jordan is only going to get better with a year coaching in the Big East under his belt. Once again, the Bulldogs will experience some bumps and bruises thanks to a challenging non-conference schedule. A down year for the conference as a whole means there are enough wins for the taking to make up for some early losses. The Battle 4 Atlantis tournament and game at Florida are great measuring sticks to see where Butler is heading into Big East play. Making a run at a second place finish in the conference is not out of the question if Kamar Baldwin consistently plays up to his potential.

This Butler team should make it back to the NCAA Tournament and easily finish over .500 in Big East conference play in what is a down year for the conference. Once again, the expectation should not be a perfect non-conference record with a solid group of teams attending the Battle 4 Atlantis along with a reinvigorated Indiana team and Florida on the schedule. An 11-7 record is a reasonable expectation in conference play and second place is certainly not out of the picture. The Bulldogs have a chance to shoot the ball really well this season with explosive guards and a pair of big men that can really pass the basketball. After two exhibition games, the Bulldogs have a ways to go defensively, but that should come with time. Ultimately, Butler’s season can be described very simply; they will go as far as Kamar Baldwin will take them.

Compared to the rest of the teams in the Big East, Butler should have some of the best chemistry and returning guys with experience in the conference. Yeah, when the second-leading scorer in the program’s history leaves, it hurts, but I felt that Butler relied a little too heavily on Kelan Martin providing its offense last year. While it worked out most of the time, it made Butler live-or-die based on what number 30 did. I do not see that being the case this year with a much more balanced team that will play what looks more like the Butler Way: team-oriented basketball. They should fare better in conference, but a tough non-conference schedule will put the Dawgs at double digit losses yet again. A third place finish in the Big East, a seven seed in the NCAA Tournament, and a win in the NCAA Tournament will be the highlights of yet another successful campaign.

There’s no question that Kelan Martin and Tyler Wideman left big shoes to fill, and it’s impractical to look at just one or two players to fill that void on their own. But the Bulldogs certainly have a number of key pieces poised to take a step up, and in the second year under LaVall Jordan, the team should be able to run smoother offensively from the get-go. A number of challenging matchups throughout the non-conference schedule figure to cause a few hiccups, but also should help the team prepare to start Big East play on a positive note. Kamar Baldwin is undoubtedly the most crucial player for this team, but Baldwin alone won’t be able to lead the team back to the NCAA Tournament. The Bulldogs will need players like Paul Jorgensen, Sean McDermott and Aaron Thompson to take another step up this season for the team to match or exceed their success from a season ago. As long as a few of those players are able to take that step, a top two or three finish in the conference certainly isn’t out of the question.

Want to know who this Butler basketball team is? The month of January should be a great indicator. The Bulldogs take on Georgetown, Creighton, St. John’s, Villanova and Marquette at home while also battling Seton Hall, Xavier, DePaul and Creighton on the road. That nine game stretch will most likely define the season for the Bulldogs and I realistically see them going 3-6 for the month. Nova, Marquette and St. John’s are in a tier to themselves in my eyes. Marquette and St. John’s have legit superstars in Markus Howard and Shamorie Ponds, while Nova has one of the all time greats in Jay Wright leading a defending champion squad, albeit missing a few of last year’s pieces. The Dawgs will get transfer Jordan Tucker for this stretch, but I simply don’t believe that will be enough to overcome some top-class talent. While Kelan Martin will certainly be missed in almost all aspects of the game, I believe Tyler Wideman’s departure will be the bigger loss for Butler. Despite top flight guards in Kamar Baldwin and the aforementioned Tucker, this team will struggle to rebound and protect the rim against players like Providence’s Alpha Diallo and Georgetown’s Jessie Govan. Butler misses the tourney for only the third time since 2007 and lobbies for an NIT bid.

Some may be questioning how this Bulldog team rebuilds itself following the departure of Kelan Martin and Tyler Wideman. However, the team as whole has the ability to work as a unit to refill the roles they carried. A quick glance at last season’s scoring statistics shows both Kamar Baldwin and Paul Jorgensen were capable of carrying a large workload and scoring points. Now, there’s the opportunity for them to boost those numbers even more with an even larger role on the court.

Non-conference matchups will show us exactly what this team is made of early in the season. If the team can walk out of the Battle 4 Atlantis tournament with multiple wins, it should give them great encouragement moving forward. However, games against Florida and Indiana will prove difficult tests. While the Big East conference may not be as competitive as in recent years, Butler will have to improve from their poor performances in away games last season — 3-7. If they do so, the Dawgs can find themselves inside the top 3 in the Big East standings come season’s end, with a likely March Madness trip in store too. The Dawgs have a lot to prove, but I foresee an exciting season ahead.

Kelan Martin and Tyler Wideman graduated. Those are shoes to fill. But Kamar Baldwin can score and when Paul Jorgensen isn’t cold, he can score too. Joey Brunk and Nate Fowler should combine to replace Wideman. That said, the Bulldogs will go only as far as their third offensive option takes them.

In the end, double-teams and box-and-ones will swarm Baldwin in Big East play and he will tire out as a result. And the schedule doesn’t do him any favors: From Jan. 2 to Jan. 13, they play Georgetown, Creighton, Seton Hall and Xavier. That’s when Sean McDermott and Aaron Thompson need show their true colors as the third offensive option.

Problem is, the two players have their fair share of hindrances. Thompson can pass and defend, but he can’t score. He made just two threes on 15 attempts last season. Sean McDermott can put the ball in the bucket, scoring 12.5 points per 40 minutes, but can’t pass: 1.7 assists per 40 minutes. I do think the Bulldogs will be an impact team come March, if they can make it there.