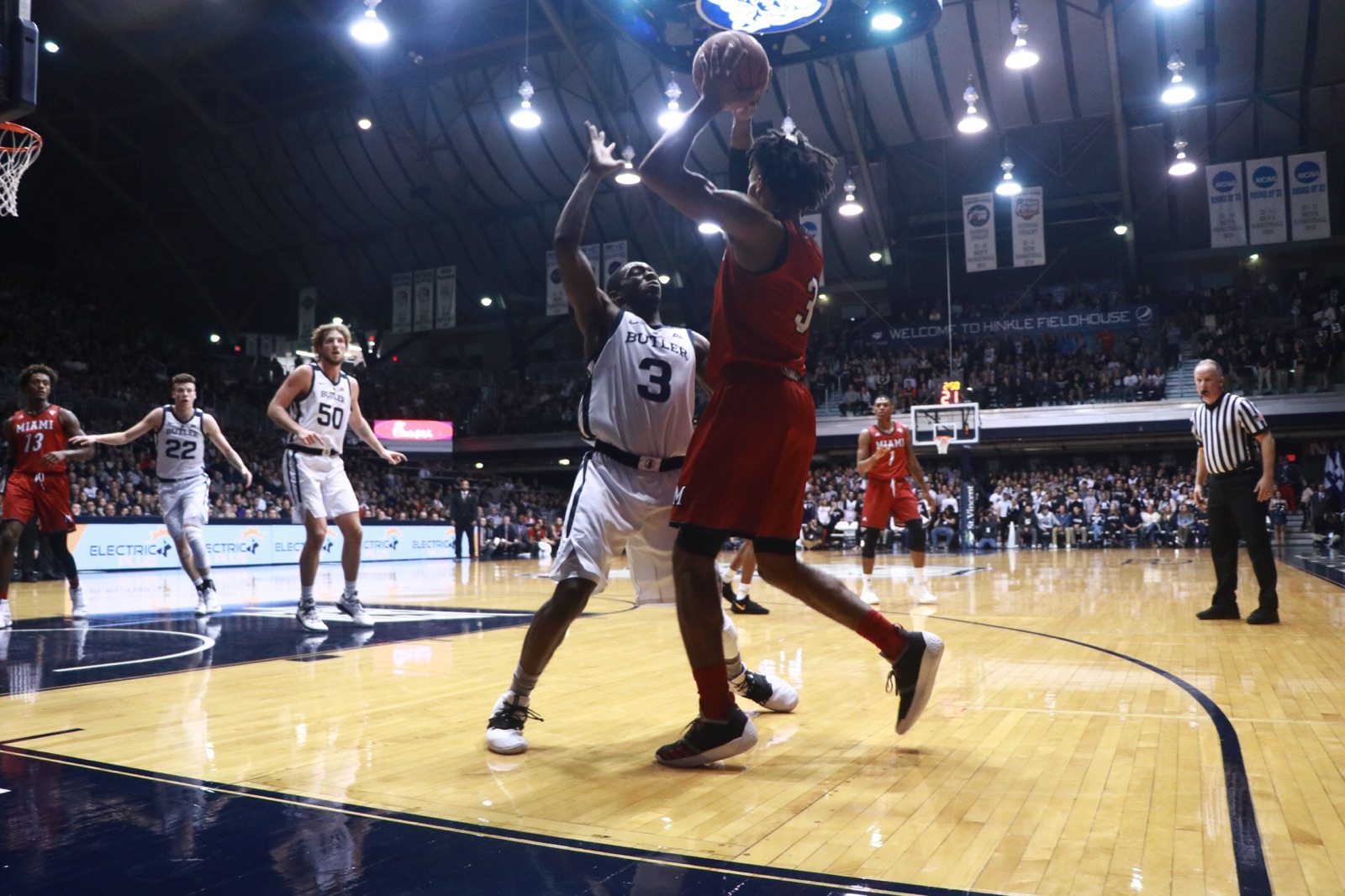 Kamar Baldwin guards a Miami (OH) player during the Bulldogs’ 90-68 win on Nov. 10. Baldwin scored 21 points in the contest. Photo by Jimmy Lafakis.

The Butler men’s basketball team picked up their 44th consecutive home non-conference win on Nov. 10, defeating Miami (OH) 90-68 at Hinkle Fieldhouse to begin the regular season. Here’s a quick look at some key quotes from after the game.

On his team’s loss to Butler: “Obviously, the game just got out of hand. [Butler] did a great job of crashing glass and getting second chance opportunities there.”

On Joey Brunk’s performance: “Joey is a great kid and I know everything he’s been through. I’m pretty proud for him to … obviously we didn’t want him to have the game that he had tonight. But he’s a big guy, he’s mobile. He was able to finish his side but he plays hard. I think that’s the one thing that he did that stood out to me as I watched films, that [LaVall] Jordan really attacked the glass and he was able to score around the rim tonight.”

On Miami (OH): “We knew Miami was going to be more than formidable. Coach [Jack] Owens has done a great job. Their pressure was something that we worked on a lot and talked about heading into this game. I thought our guards did a really good job.”

On his bench’s performance: “I was really, really pleased with our bench coming in. We got a couple of fouls early — Sean [McDermott] and Paul [Jorgensen] and Nate [Fowler] — and our bench came in and did a tremendous job. It’s a team effort. You look at us with 18 assists. I think that tells you a lot about this group in terms of their connectivity.

On moving forward: “A lot of things to work on and clean up. Obviously … they hit seven threes in the first half. [That] was too many, and we talked about getting the shooters. So we’ve just got to do some things, and we’ll talk about that in practice. But this team can continue to get better, and the way that they’ve worked up to this point, we know they will.”

On Brunk’s performance: “You’re in this to help guys grow. Ultimately, at the end of the day, we’re going to win some, we’re going to lose some. But to see guys grow and mature … to see their game grow and see them get opportunities. You’re extremely proud and excited.”

On his big performance: “It’s great to get out there and get to play. It’s something that I’ve dreamed about for a long time. So I was really grateful … for that opportunity. I’m excited for the rest of the year.”

On Butler’s strong start: “That was definitely one of the focuses we had as a team coming into the night. Starting early, especially after the Southern Indiana game. … We knew we had to come in with great energy and just get off to a good start. We were able to do that tonight.”

On Miami’s performance from beyond the arc: “We knew coming in that they were going to shoot the 3-ball a lot. So we worked on guards chasing them off the line. … They made some tough ones, credit to them. But we did a pretty good job, I feel like.”

On his improved post offense: “Just getting my body right in the weight room. I feel a lot stronger down there, able to take bumps, get the balance, and just be able to play through contact and finish the shot.”