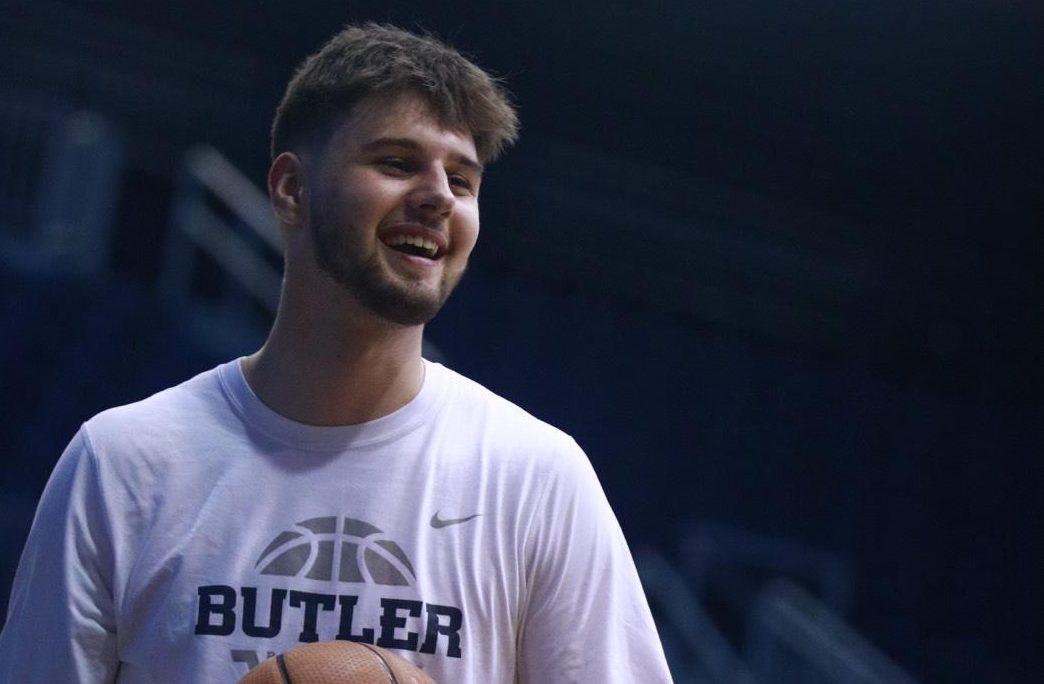 Bryce Golden during a workout at Hinkle Fieldhouse. Golden is in his first season as a Bulldog. Jimmy Lafakis/Collegian file photo.

If you were looking for Bryce Golden at age 14, it wouldn’t be hard to find him.

The first place you’d look would be in the backyard of his home in Winchester, Virginia. There, with a hoop set up and a basketball in his hands, you’d most likely find Golden with his brother, Grant.

The two couldn’t get enough basketball.

“It was really one of the only things we did,” Golden said.

Basketball wasn’t just a game for the Golden brothers; it was a distraction. The brothers’ father, Craig, had been hospitalized following a failed kidney transplant and their mother, Ellen, spent much of her time with him.

The family’s home in Virginia was more than two hours away from the hospital in Richmond. Every week, she would make the drive back and forth to try and be in each place as much as she could.

“It was tough on all of us,” Golden said. “Me and my brother, we became pretty close from the situation and it even strengthened our relationship with our mom too because she made sure we were still doing what we were supposed to be doing.”

Golden said that basketball made the situation a little less tough.

Craig recovered and was back home in time for Golden’s start of high school. The newfound stability allowed Golden to play basketball at Saint James School, a boarding school that he said helped him develop as an athlete and as a person.

Craig is still very present in his sons’ lives. He’s attended and tweeted about Butler practices at Hinkle Fieldhouse, praising the “Mikan Drill” while watching Golden perform it.

Ellen Depoy-Golden continues to be involved in the boys’ lives as well. In a way, she is on the court with them even when she is not present for a game. Her favorite number is three.

So, when Grant was choosing a number on the basketball team at the University of Richmond, he thought back to this time in their lives and chose 33.

When Golden got to Butler, he decided he wanted to do the same.

“It’s something that the three of us have together,” Golden said. “Both of us honor our mom by wearing it, so it’s definitely something we talked about a little bit but it was definitely more my decision just to wear it and you know, that’s my mom.”

Before the 2002-03 Butler basketball season, the Bulldogs made a list of goals for the year on a whiteboard in the locker room. Among them was to reach the NCAA Tournament.

One player took issue with that. Joel Cornette, a senior, did not see this team as a tournament team. He erased it from the board and replaced it with his vision. “National Champions,” he wrote. For a team that had missed the tournament the year prior, this was a bold claim.

“People would probably think, ‘The audacity of this guy to think that Butler could get to such great heights.’ But that’s what a fierce competitor my brother was,” Joel’s brother Jordan Cornette said. “And the belief that he had in this program, probably came before the program had the belief in itself.”

Butler would not become national champions that year, but they did reach the Sweet 16. It was arguably the program’s most successful campaign since the 1929 season, in which they were designated collegiate national champion by the Veteran Athletes of Philadelphia.

The season, in many respects, was a turning point for the program. A program that hadn’t won an NCAA tournament game since 1962 would see 17 such victories in a 10-year span starting then.

Brandon Crone, a senior in high school during Cornette’s senior year, had committed to play basketball at Butler already.

“The program that he helped build up — because the program was trajecting up with him — was a lot because of his belief,” Crone said. “I think belief in himself, belief in Butler and then just the passion he played with.”

Crone said that Cornette didn’t keep that passion to himself.

“He will go down for me as one of the best pregame speakers you could ever have,” Crone said. “That guy would really fire you up. He just spoke with so much passion and it all came from a place of wanting Butler to win. That’s how much he loved this place.”

Cornette had such an impact on a young Crone, that Crone decided to take an extra step to preserve Cornette’s passion and belief. So, for all four seasons at Butler, Crone wore the No. 33 just as Cornette did.

Years passed, and Butler basketball continued to gain relevance. But then, on Aug. 16, 2016, Cornette passed away at age 35.

The team still holds onto these tenants and instills it in its players.

“With coach [LaVall] Jordan being teammates with him, a lot of that [what Cornette stood for], we try to put through to our players,” Crone said.

Cornette’s legacy extends beyond the No. 33. But the number is a tangible, physical thing that does its best to represent at least some of it.

For Butler’s basketball program, the No. 33 is Joel Cornette, it is the passion and belief that he stood for and it’s the program’s longlasting rise due to his efforts.

Can the number simultaneously represent all of these things within the confines of Hinkle Fieldhouse?

That was the question that faced the entire program when Golden expressed his desire to wear it this offseason.

Golden contacted the Cornette family to discuss it.

“He asked the Cornette family for permission, which I thought was honorable,” said LaVall Jordan, current head coach and former teammate of Joel Cornette.

After meeting Golden and hearing his reasoning, the Cornettes agreed that it would be fine for him to wear it.

Even if the family didn’t say so, the number comes with strings attached. Golden will have to prove that he deserves it.

“You definitely feel like you got to bring energy every night,” Golden said. “Like he would. It definitely gives me a little boost every time I go out and practice or play, whatever it is.”

Crone said he thinks Golden is up to the challenge.

“Bryce plays with a lot of passion as well, plays really, really hard and I think he definitely is a player that can kind of live up to that number,” he said.

“Golden is a phenomenal young man in terms of their similarity as people,” Jordan said. “There’s a big, big, big spot in my heart for [Cornette] and his family. [Golden and Cornette] are ultra, ultra competitive. So it fits in terms of the 33 number.”

Basketball may just be a game and 33 may just be a number, but every time Golden puts on the No. 33 jersey at Hinkle Fieldhouse, to Golden, to the Cornettes, to Crone, to Jordan and to Butler basketball, it will mean so much more.