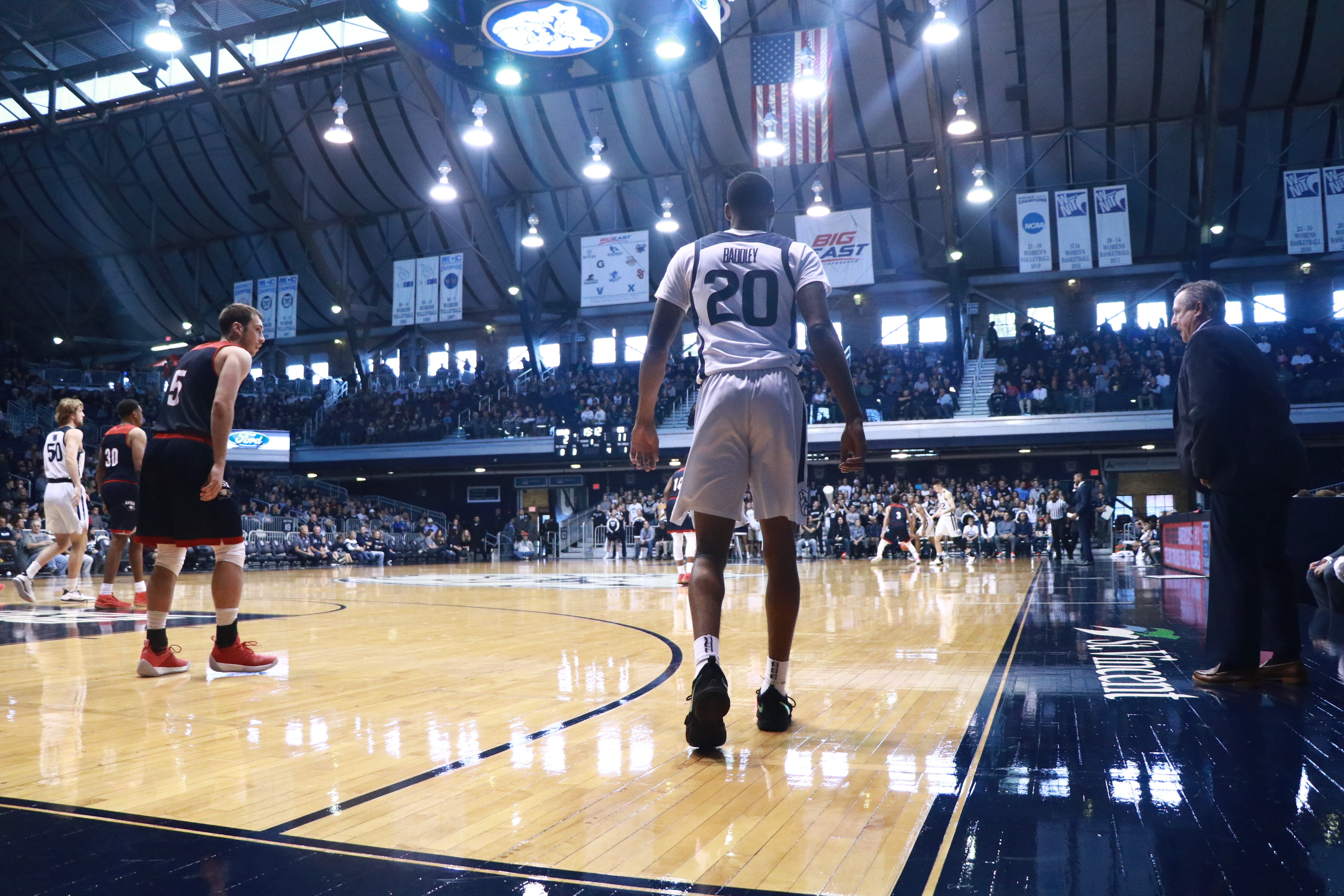 Henry Baddley watches a play unfold in front of him during Butler’s Nov. 4 exhibition against Southern Indiana. Baddley and the Bulldogs were ranked 74th out of 353 Division I college basketball teams entering the season by CBS Sports. Jimmy Lafakis/Collegian file photo.

You can smell it in the air. You can see it in the leaves on the ground. You can feel it on your skin, that brisk and stinging chill of the morning air. It is fall in Indianapolis. With fall sweeping across the Midwest comes a special time for the Butler faithful: basketball season. As the temperature dips, the action at Hinkle Fieldhouse is only getting warmer. So, as we begin to wake up from our basketball hibernation and dust off the cobwebs that have settled in since last March, here are ten numbers to know ahead of the upcoming season of Butler men’s basketball:

The points per game production level that the Bulldogs will have to find elsewhere after the graduation of Kelan Martin and Tyler Wideman. With those 30.5 points per contest came 2.5 assists and 11.4 boards from the duo.

Anticipated cost of the second phase of Hinkle Fieldhouse enhancements. The renovations include “a complete renovation of the Efroymson Family Gym, air-conditioning in all public areas of the fieldhouse, and extensive work to the men’s soccer locker room,” per butlersports.com.

As of Nov. 6, the number of tweets delivered by new strength coach Matthew Johnson. His inspirational and motivational content is certainly worth a follow as he joins the Bulldog staff. For basketball, he has already brought a new and interesting change to some workouts, enlisting a DJ to ensure quality tunes prime for working out. He also works to personalize diets for each and every player to help them achieve peak performance. So, when you see Kamar Baldwin make a high-flying and acrobatic slam, thank coach Johnson.

The ranking given to sophomore Jordan Tucker in the ESPN Top 100 High School recruits. Tucker used this high billing to sign with Duke in 2017 and Butler hopes he can continue to flash this talent this year when he becomes eligible following the end of the fall semester.

Number of tickets sold for Butler’s regular season home opener on November 10th against Miami (Ohio), a sellout. Expect Hinkle Fieldhouse to be at full capacity on this particular Saturday night, and many other days and nights this winter as Butler pursues a fifth straight NCAA tournament berth.

Average temperature for the third week of November on Paradise Island in the Bahamas. This is the type of weather the team will find itself in this year as they travel to the islands for the Battle 4 Atlantis tournament, and if that doesn’t make you jealous, I’m not sure anything can. In the tourney, the Bulldogs face Dayton in the first round and will get either Virginia or Middle Tennessee State in the second. This second contest will take place at either 4 p.m. or 9:30 p.m. on Thanksgiving Day, so while football may be the traditional sport to enjoy on this holiday, this might be the year to tune the TV to basketball.

Butler’s place in CBS’ ranking of all 353 D1 basketball teams, penned by Matt Norlander. Norlander admits that he could be very much underestimating the Bulldogs and cites sharpshooter Sean McDermott as a key piece in proving him wrong this upcoming season.

One more tidbit from those CBS rankings. The Villanova Wildcats were tabbed as the ninth team in the country in that listing, and they come to Hinkle Fieldhouse on Jan. 22nd. Bulldog faithful will of course remember last year’s upset win over these cats, so this is sure to be a must-watch for Butler fans this go-around.

If you’re too busy studying to make it to a game (and really, who is? It’s Butler basketball! But this is a hypothetical so let’s run with it) then you’ll want to know where you can listen to Mark Minner and Nick Gardner call the game through the radio waves, and that would be on WFNI 107.5 FM or on 93.1 FM if the game conflicts with an Indiana Pacers or Colts contest.

Last year’s record for your Bulldogs. This and a strong performance in the Big East Tournament was enough to get Butler into the NCAA Tournament for a fourth straight appearance. LaVall Jordan and Co. hope to at least match if not improve on this record in this upcoming season to return to the Big Dance and take another shot at the national championship.