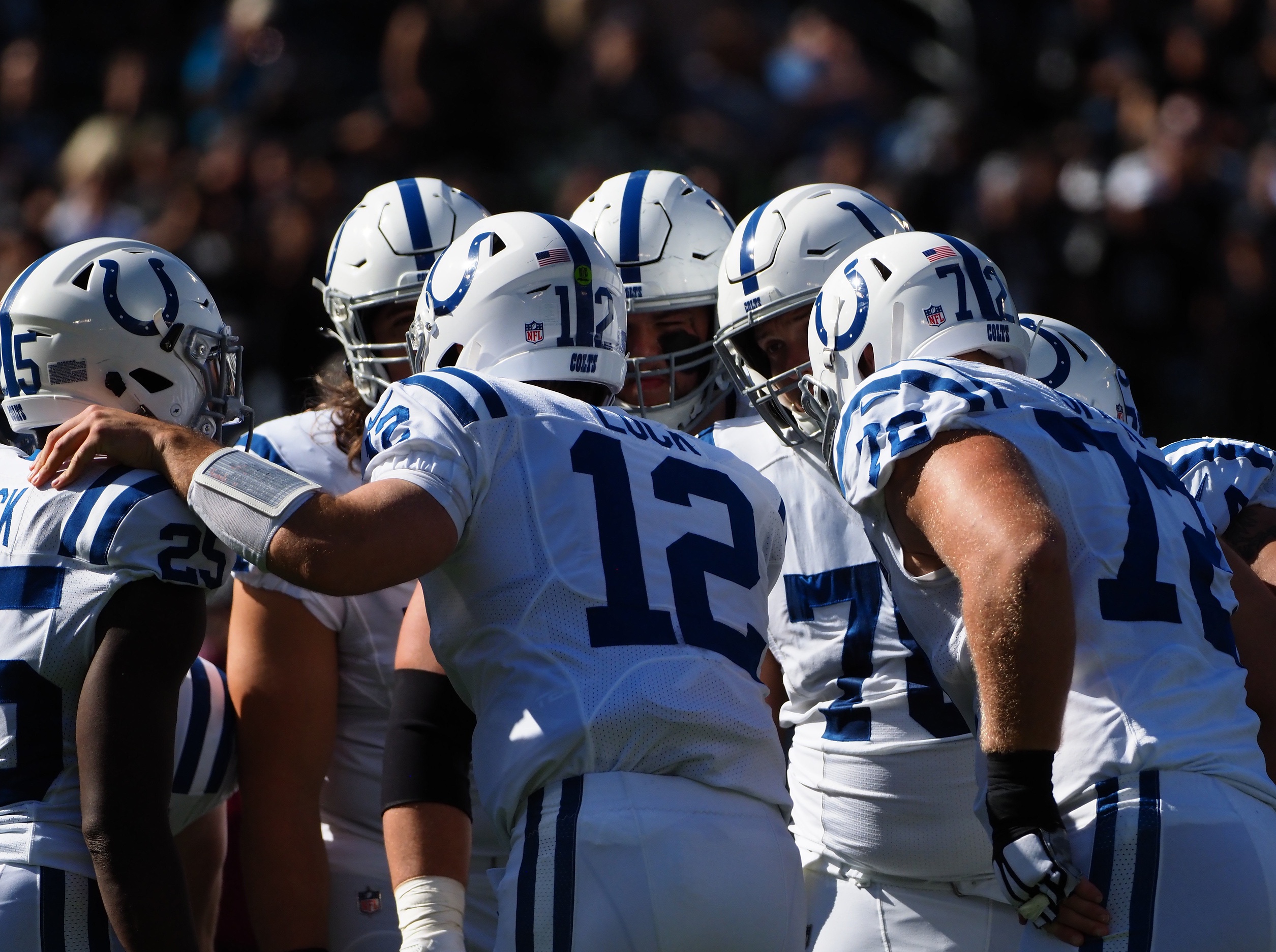 The Colts offense huddles before a play against the Oakland Raiders on Oct. 28. They are currently two games behind the Houston Texans for the division lead. Photo by Kelley L. Cox/USA Today.

Just a few short weeks ago, the Indianapolis Colts, now 3-5, found themselves tied for dead last in the league with a record of 1-5, a death sentence for any team aspiring to be playing in January come playoff time. But what if I told you these Colts would be strapping on the pads come Wild Card Weekend? Believe it or not, it’s not as crazy as people may think. The Indianapolis Colts will make the playoffs. Here’s four reasons why.

The Defense: This is the best defense the Colts have fielded in recent years. They are fast and flock to the football. No one is better at that than their superstar rookie linebacker Darius Leonard, who leads the league with 88 tackles. “The Maniac” has three forced fumbles and four sacks to go along with his 88 tackles.

Outside of Leonard’s impressive campaign, the defense has been doing a nice job at getting after the quarterback and forcing turnovers. They are tied for tenth in the league in sacks with 21 and tied for third with Seattle in takeaways. An opportunistic defense that can make plays is a key component to a winning football team.

The offense has gotten their playmakers back: For weeks, the Colts have been mixing and matching a group of practice squad receivers to catch passes from Luck. They had to rely on rookies Nyheim Hines and Jordan Wilkins to keep the running game afloat and a rookie offensive lineman to protect Luck’s blind side. That all changed when they got their whole starting offense back in a Week 7 contest against the Bills. The Colts finally showed what they were capable of doing on offense. They were methodical and efficient. Luck finished the day with a line of 17-for-23 with 156 yards and four touchdowns, two of which went to T.Y. Hilton. Mack rushed 19 times for 126 yards and two touchdowns.

The offense kept the trend moving forward as they relentlessly imposed their will on Jon Gruden’s Raiders in Week 8. The gang managed to put up a whopping 42 points and won the contest 42-28. Mack had another huge game as he gashed the defense for 132 yards and two touchdowns Luck continued his masterful play as well. The Colts have found their stride at just the right time as they enter the second half of the season.

Strength of schedule: The Colts have faced some tough opponents through their first seven games. Some notable teams are the defending Super Bowl champion Eagles and the Redskins, who are currently leading the NFC East. The fact that the Colts very well could have snuck a few victories against the Bengals, Eagles and Texans is an encouraging sign moving forward.

Frank Reich: The first-year head coach has been impressive so far. He has this team competing in every game and is taking this offense to an elite level. The Colts rank sixth in the league in points per game with 28.9. This is a level that Colts’ fans haven’t seen since the Manning days when Reich was an intern under the great Tony Dungy.

Reich made clear all offseason that he wanted to implement an offensive scheme that is balanced. He wants to run the ball and protect Andrew Luck by releasing the ball faster. Since Reich got his studs on offense back, he has made this offense look lethal. Reich has shown all year how aggressive and creative he is, which will only help the Colts going forward as he looks to expose sub-par defenses.

The Colts are a good football team. They have playmakers on both sides of the ball and they shouldn’t go unnoticed. They will make the playoffs and I can guarantee no one will want to play them. The young defense will only get better. The offense will continue to gel and scare opposing defenses. This team could very well make some noise if they get in.