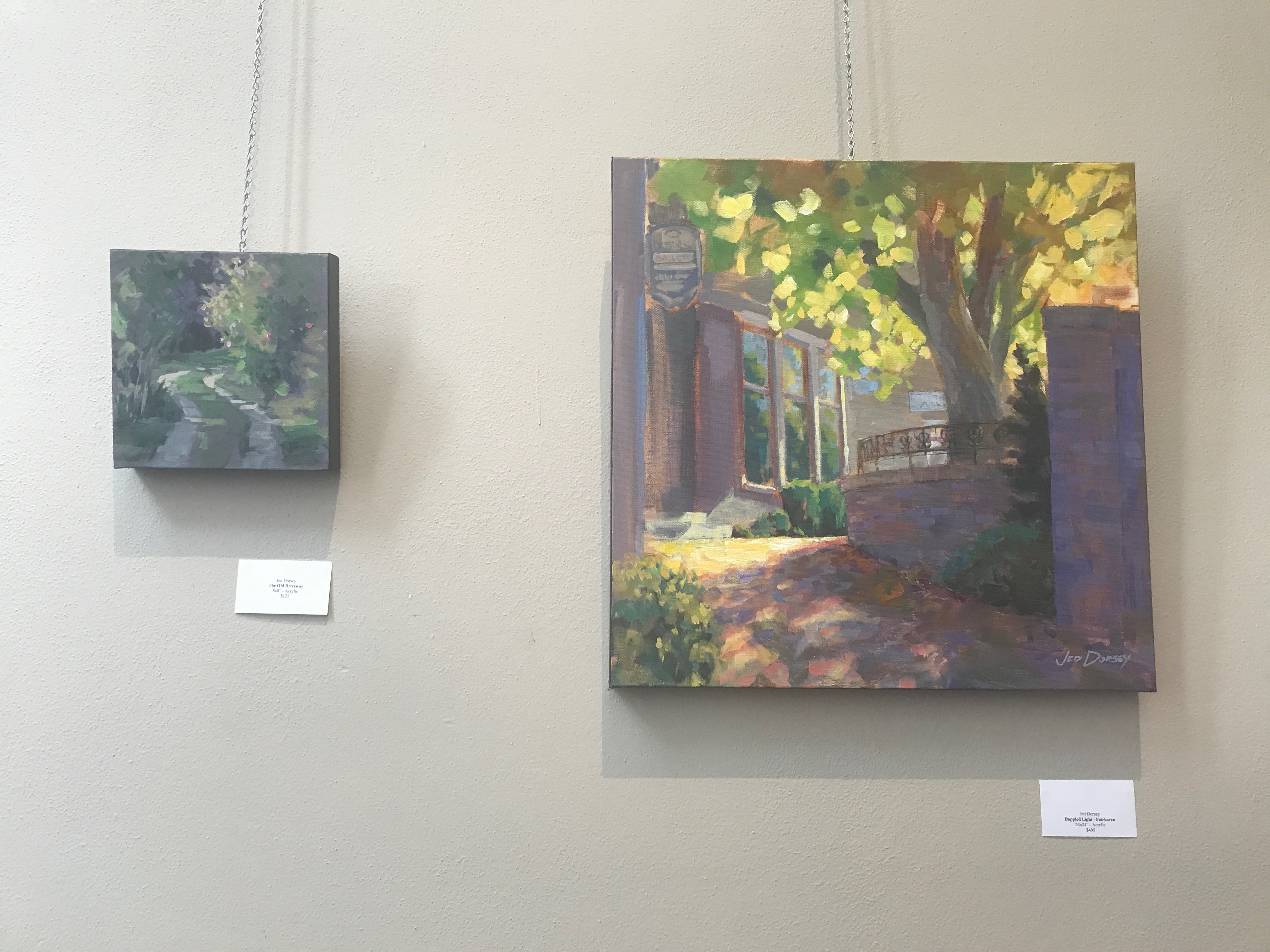 Photo by Julia Bluhm. Jed Dorsey is an artist who’s plein air paintings are being shown in Clowes Hall. His paintings “The Old Driveway” (left) and “Dappled Light” (right) are shown here.

Justin Vining had no idea Butler University would offer him the chance to curate another exhibit at Clowes Memorial Hall after his first exhibit last year. When he was given the opportunity, he jumped at the chance to work in what he described as “one of the best exhibition spaces in the city.” This time, Vining requested to invite some of his favorite living artists and friends.

“I gravitated towards the artists I plein air paint with all the time and then the plein air painters that I have bought from and collected over the years,” Vining pointed out.

After he was cleared to invite more artists, he had to decide the exhibit’s theme. Looking at the art displayed in his home, he realized that the majority of the work on his inspiration wall was from plein air artists. He took a chance and invited eighteen plein air artists.

While only seventeen were able to make it, Justin was excited to get to work curating the exhibit.

“It has been a pure joy putting this exhibit together.  Getting to know all of these painters from all over the country has been really fun.” Justin stated.

Plein air painting, the type of artwork showcased in the new exhibit, has a French origin. “En plein air,” or “in the open air,” refers to an artist’s ability to take their canvas and paints outdoors to paint the ever changing scenery of the natural world around them. The difficulty with this style is that the scene is constantly changing regarding light, placement, water movement, and other factors.

As the date of the exhibition drew closer and the paintings began to be delivered, Justin felt “it was like Christmas opening up all of the boxes and seeing the paintings in person for the first time.”

Not only did he feature paintings from several of his favorite living artists, but he also added a few of his personally created paintings.

One of the artists, Tad Retz, was gathering art together for his first solo show in Maine at Camden Falls Gallery when Justin asked him to be a part of the In Open Air exhibit. He taught a workshop the week he went to drop off his artwork at Clowes. People from across Indiana came to participate in two painting demonstrations: one of an old truck and the other of a small community center.

When asked about his art, Retz pointed out that his paintings are a result of carefully observing his surroundings.

“Every one of these pieces is the result of studying light and color vigorously and obsessively for almost four years,” he said. “When I create a piece it is usually focused on one specific aspect of the scene I’m looking at.”

The “In Open Air: Plein Air Group Art Exhibit” is free to attend and will be showcased in Clowes Memorial Hall from Aug. 7 to Oct. 5 during Clowes’s regular hours of 9:30 a.m. to 4 p.m. All paintings displayed are for sale and can be purchased during regular hours and picked up after the show closes.