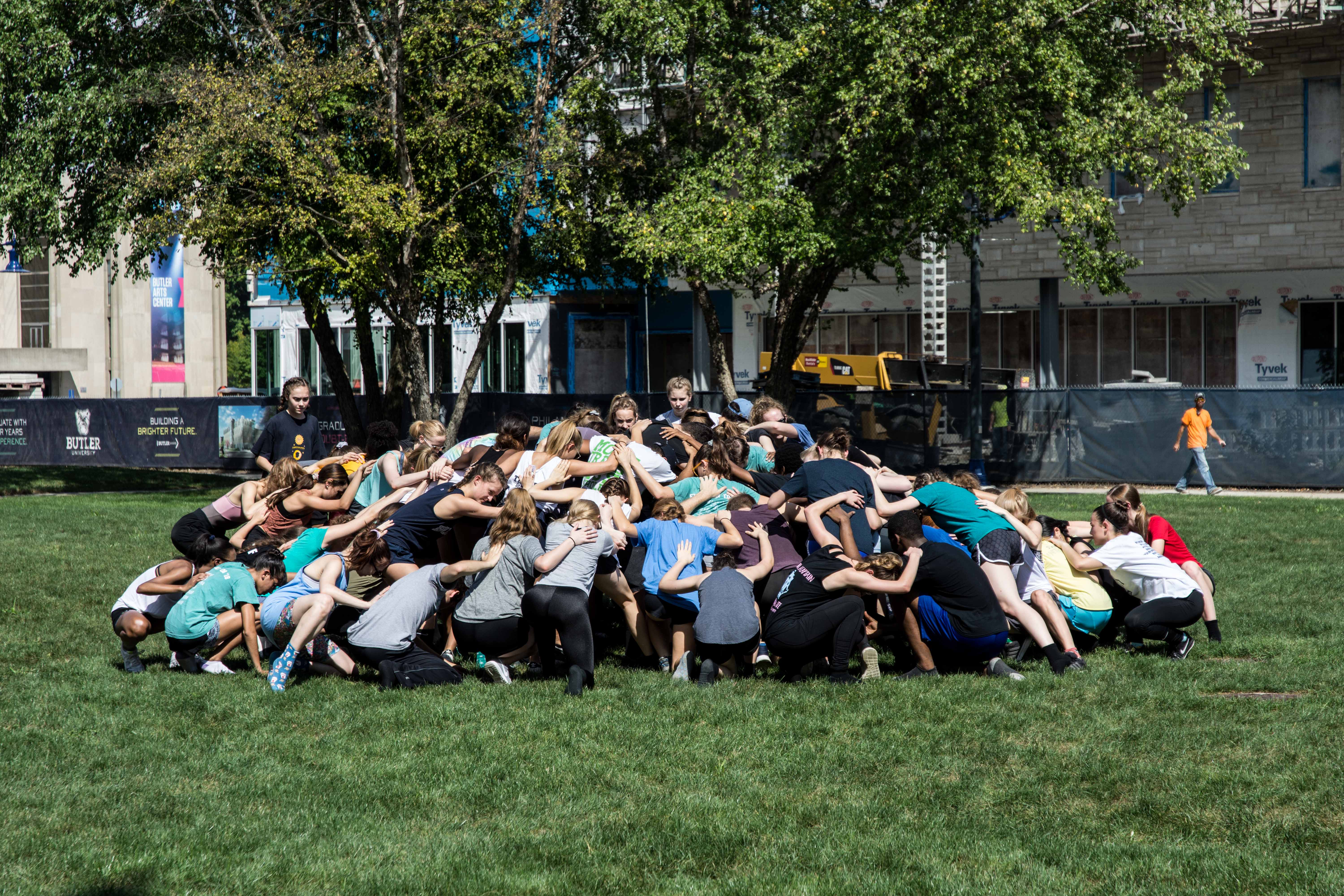 Butler Ballet students rehearse for “The Gallery of Memories” on the front lawn. Photo by Peter Larson.

On Sept. 20, the Butler ballet department will perform “The Gallery of Memories”  outdoors to celebrate the largest incoming class of first-year students. The dance is a “movement choir” that featuring dancers moving together in simple moves. The event will be held outdoors between Jordan Hall and Irwin Library.

Cynthia Pratt, head of the Butler ballet department, said that this is a dance and not a ballet. There are no pointe shoes. There is no stage. It is meant to integrate the dance department into the community of Butler and expose it to people who have not seen the dance department perform.

The theme of the dance was put together through a series of interviews where people talked about Butler’s sense of community. Pratt and four students collaborated together to choreograph the dance.

Amanda Piroue is a junior dance pedagogy major and one of the four student choreographers. She participated in an outdoor performance her first year, but this is her first experience choreographing.

“It’s definitely been interesting working with such a big group of people,” Piroue said. “You have to take that into consideration when making your movements. It’s been challenging but a really good experience.”

Piroue says the performance is meant to shine a light on the dance department as well as appeal to the rest of campus and other communities.

“It is more real, and relatable to other students,” Piroue said. “As a dance department we don’t seem as included with the rest of the university. We want to bring the average student’s experience forward for everyone to see and mesh the dance world and regular student life.”

With the whole department involved for the entire allotted time of twenty-five minutes, Piroue says the collaborative element has built a tighter community.

“It’s a good bonding experience,” Piroue said. “It brings a lot of people together because all of us are together.”

“They did a lot of the vocabulary of the movements and I helped with the transitions,” Pratt said.

One main reason for this performance is to showcase the dance department’s innovative side. Pratt also wanted to expose her students to other ways that dance can be expressed.

“They are many ways to create in the dance world, not just The Nutcracker and Swan Lake,” she said.

Daniel Scofield, a sophomore arts-administration dance major, has performed outside in small groups but not to this kind of scale. He felt this dance has more depth and is on a grander scale than his previous outdoor performances.

“The magnitude of this dance would be lost in a theater,” Scofield said. “We would be falling on top of each other.”

He thinks the large outdoor space adds to the dance, and makes it an unusual kind of performance.

“It is different and fun,” Scofield said. “There is color and texture and flows so well.”

One of his major takeaways for people to know is the collaborative aspect of the show.

“It is more well-rounded,” Scofield said. “Just seeing everyone’s different ideas and how they come together has been fascinating,” Scofield said. “Everyone of hundreds is doing the same thing. It’s the entire department as one big machine.”

Overall, Pratt says this is not a performance to miss, calling it a “rare occurrence.”

The dance will be performed at 6:30 p.m. It is free and open to the public.