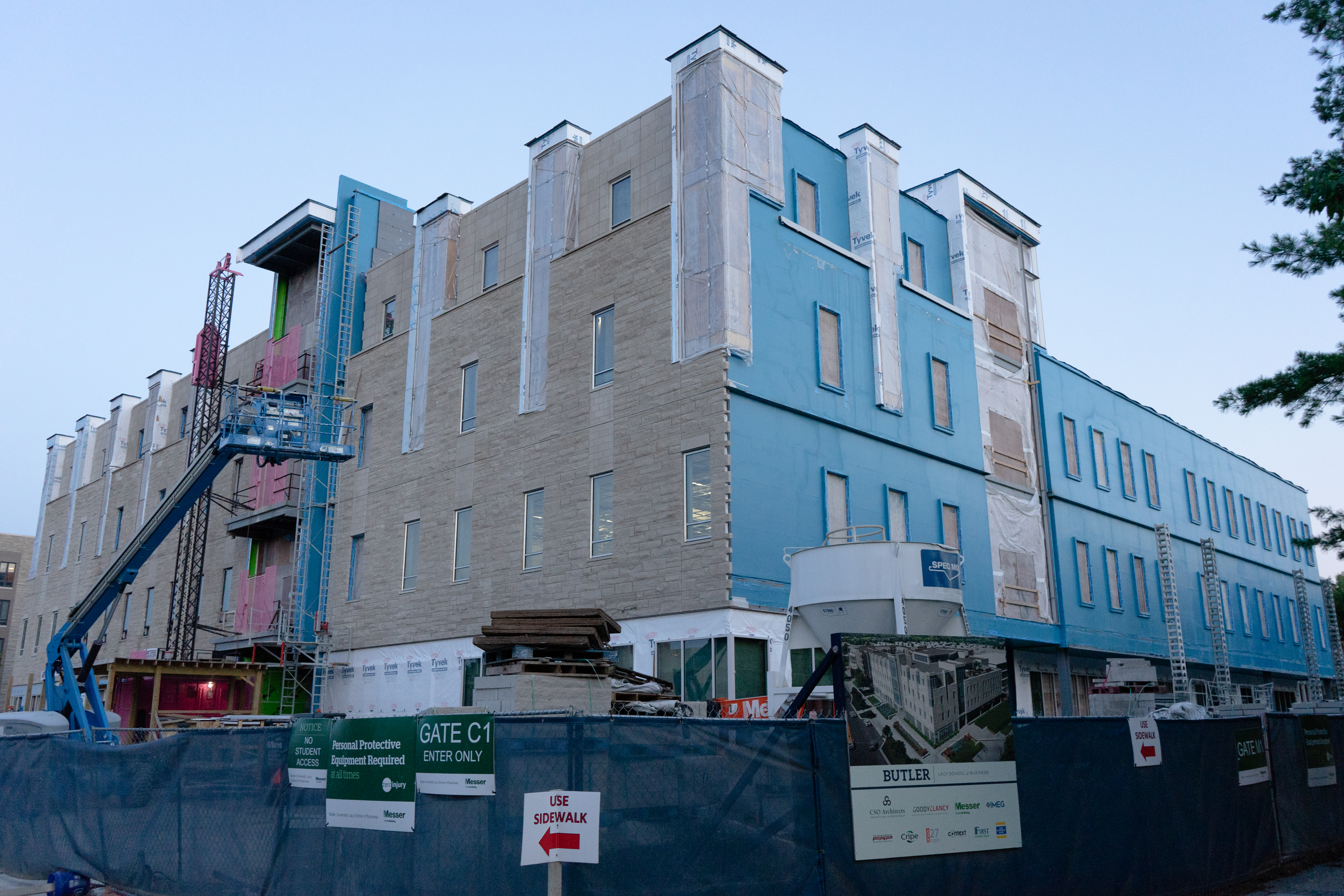 The current look of the new Lacy School of Business building located at the entrance of campus. Photo by Adam Cvik.

By the fall of 2019, the new Lacy School of Business building will be fully functional, according to the university’s current plan. Construction will be completed by the end of this academic year.

The finished project will have stayed within the planned budget that was made possible through multiple fundraisers and a $5 million gift from Andre Lacy, who also gifted an additional $20 million to name the school, totaling a $25 million gift to the business school.

According to the Dean of the Lacy School of Business, Stephen Standifird, as of right now, there have been no setbacks or challenges with the new building.

“We have had contractors from Messer on schedule, on task and doing such an amazing job, which has been huge,” Standifird said. “We really hit a home run with them.”

LSB will be moving from the Holcomb Building, which is 17,000 square feet. The new building will be 104,000 square feet, bringing hope of greater connectivity throughout campus. With a bigger building, more students can become immersed into the program and more collaborative programs can be made between different schools on campus.

One new connection will be with the new building and Irwin Library via skywalk. Now that more space is available, there will be more space on the third level, allowing the new building to become the “front door to the students and the university,” Standifird said.

Evan Dieterle, sophomore entrepreneurship and marketing major, said he is excited for the new building. However, he said he is also frustrated with the current lack of rooms available for business students’ classes.

“We really need the space,” Dieterle said. “The fact that many of our classes, I believe over 50 percent worth, are out of the Lacy school is just ridiculous.”

Not only will the new business building have the usual offices, classrooms and more third-floor space available than their total current space in the Holcomb building, but it will also contain food service that is part of Butler’s food service program.

Standifird said they are working on getting an Einstein Bros. Bagels in the building.

The new building has brought excitement to campus, not only for the staff but also for students. One student who expressed her excitement was first-year marketing major Rumnik Ghuman.

“It’s really nice,” Ghuman said. “I feel like it’s going to get myself and others more involved on campus.”

The prominence of the business program at Butler continues to be emphasized by the new building. However, it is also “not a zero-sum game,” Standifird said. This means that although there is added prominence to the business school, other schools are not getting overshadowed. The other schools will also benefit from the new building, Standifird said.

“This building will create growth in the business school, but the business school is deeply connected to the core mission and liberal arts focus in general,” Standifird said. “Therefore, what I am hoping is that this building helps create an enhanced level of collaboration opportunities for things going on throughout the university.”