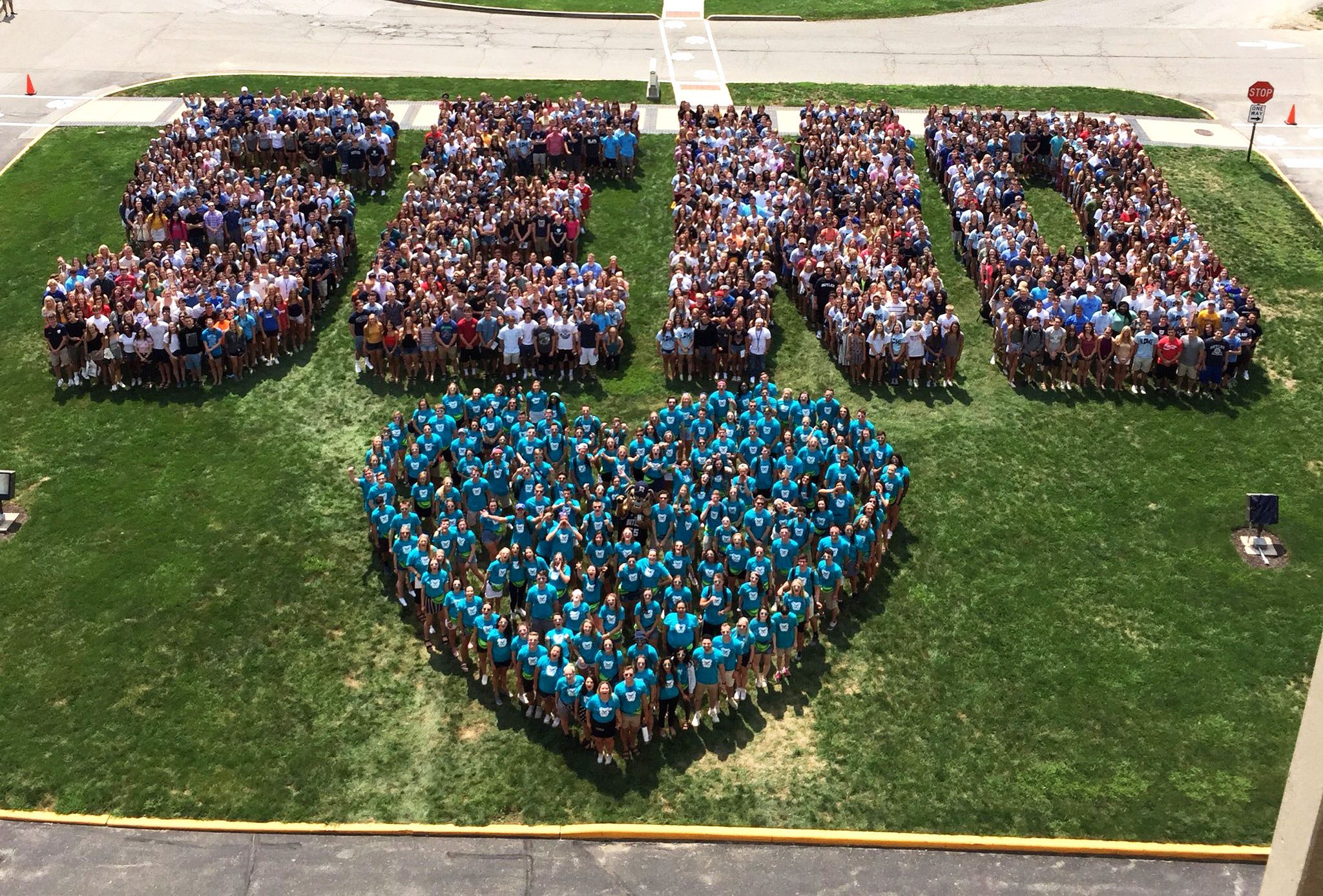 The new first-year students and SOGs pose for the Class of 2022 photo on the lawn of Clowes Memorial Hall. Photo courtesy of Butler University Operations Twitter

On Aug. 19, 1,336 first year students moved into their new dorms and participated in Butler’s annual Welcome Week activities. The Class of 2022 is a record breaking size and brings the school’s total undergraduate population to around 4,600.

The incoming class also shows a 3 percent increase in diversity, with 16.9 percent students coming from a multicultural background.

“Being a part of a record breaking class is really exciting,” first-year entrepreneurship major Isaac Manion said. “It makes you think that Butler is only getting bigger and better.”

With the Class of 2022, Butler greatly surpassed its admission goal of 1,175 students. In addition to the largest class ever, Butler received 16,431 applications this past spring — the largest application pool to date.

The largest class in our history starts classes August 22. Here’s your chance to get to know them, by the numbers. Meet @butleru2022! pic.twitter.com/qigIrluxHT

“We have an opportunity to leverage our national success in basketball,” Danko said. “Let’s make these investments so that Butler gets to a point where it’s recognized nationally. It improves placement rates and continues to hold that quality of education in the classroom that we have.”

While his strategic plan has brought in a record-breaking class, Danko emphasized the importance of maintaining the school’s 12-to-1 student-to-faculty ratio.

Admission strategies also included targeting various key recruiting markets of the United States, as 60 percent of the Class of 2022 is from out of state. According to director of admission JD Menifee, Butler’s admissions department works closely with the marketing and communications department to strengthen Butler’s brand awareness, especially in areas further from the Midwest.

“We’re growing in applications in both in state and out of state,” Menifee said. “We’re also continuing to see growth in how diverse our applicant pool is, and that’s not only domestic but also international. So again, we want to think about all of those things to help shape a class that’s not only a good fit for our institution, but also reflects the institution we desire to be.”

Elevating Butler’s national profile has manifested in several forms. Within the past several years, Butler has moved to the Big East Conference, constructed academic buildings, expanded into the Christian Theological Seminary located on the new South Campus and built new dormitories.

“When you think about what students are seeking, and when you think about how much college costs, sometimes there’s a sense that we want to visually see what we’re paying for,” Menifee said in reference to the new residence halls. “I think it’s critical to be able to accomodate students and families when they come to our institution.”

Irvington houses 634 first-year students, and ResCo houses 493 first year students. With this, a solution had to be made for the other 209 students. While some decided to commute, 198 students are currently living in the previously ceremoniously closed Ross Hall.

With all of these changes in mind, Danko reserved some advice for the Class of 2022.

“You’ve got to be uncomfortable, you got to feel uncomfortable as a new student,” Danko said. “That’s part of learning. Don’t sweat the big stuff, so to speak.”