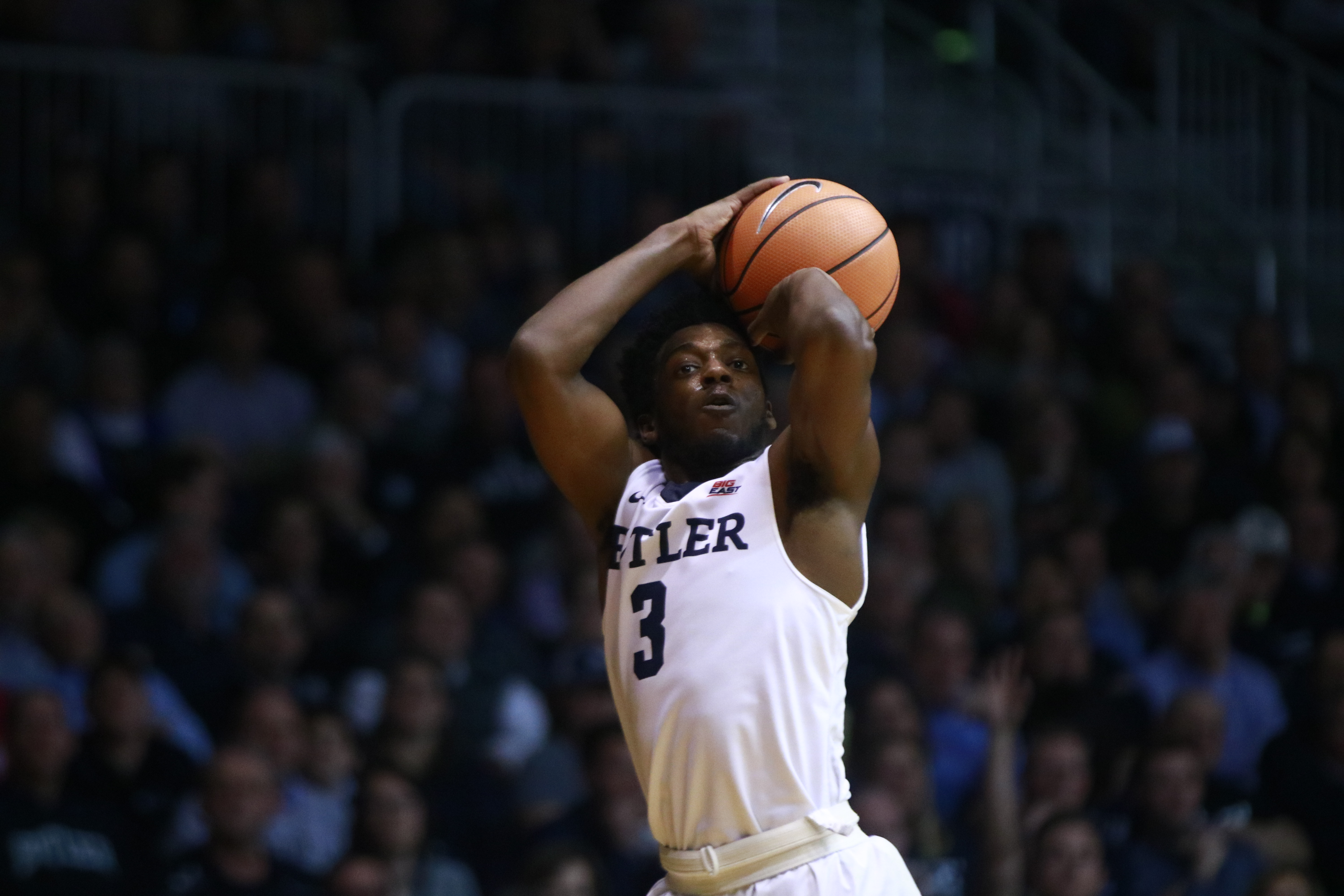 Kamar Baldwin sets up to shoot. Baldwin increased his scoring from 10.1 points per game to 15.7 in his sophomore season. Jimmy Lafakis/Collegian file photo.

There were six minutes and 24 seconds left in the second round game of this year’s NCAA Tournament when Butler began their comeback. The two-seed Purdue and the 10-seed Butler had battled all game, trading baskets for a majority of the contest.

In these last six minutes, the Bulldogs were fighting for their spot in the Sweet Sixteen. They were down 10 points and began to attack the Boilermakers on both sides of the basketball. Senior Kelan Martin continued to score down the stretch, netting six points to put Butler down three with two ticks left on the clock.

Those two ticks would be the last of Martin’s storied Butler career.

The senior had 29 points in the game, the highest on the team. With this potentially being the last time he put on a Butler uniform, the broadcast team outlined that it was Martin’s shot to take. Instead, first-year head coach LaVall Jordan opted to put the ball in the hands of sophomore guard Kamar Baldwin.

“When it comes to clutch situations there is an ‘it’ factor,” said Emerson Kampen, Baldwin’s position coach. “In those situations it’s not about the play, it’s about the player. Kamar is the kind of player that can create that separation and get a good, open look. That’s why he gets the ball.”

Baldwin has a knack for ending up with the ball in clutch situations. The 2016 Gavitt Tipoff Games during his freshman year was the first example, when Baldwin’s 18-foot jumper with 0.4 seconds left gave the Bulldogs a 70-68 victory over the Northwestern Wildcats.

“Since I was a kid, I’ve always loved taking those shots,” Baldwin said. “Every kid has those moments where they’re counting down in the yard and trying to hit that last second shot. I know I’m going to miss them more than I make them, but at the end of the day I feel like everyone of those shots is going in.”

Without Martin, Baldwin will inevitably be making more shots. When Martin graduates, so will the majority of Butler’s offensive load.

Baldwin has shown off his scoring abilities, having averaged above 10 points per game in his first two seasons. He has shown his ability to score in bunches as well, putting up over 20 points in seven contests in his Butler career.

Baldwin has been a critical player for the Bulldogs in his first two seasons in Indianapolis. As a three-star recruit, not many people had heard of the Winder, Georgia, native before he played his first game in Hinkle.

But within a matter of weeks, he was earning the praise of former head coach Chris Holtmann thanks to the his hustle and unique skill set.

When asked if the rapid development of his guard was a pleasant surprise for the coaching staff, Holtmann just smiled and shook his head. The freshman seemingly came out of nowhere only because the coaching staff tried so hard to keep him a secret. They knew exactly who they were getting when they recruited Baldwin, who still addresses media members as sir or ma’am, out of Apalachee High School.

“I would describe myself as a kind, quiet and generous kind of guy,” Baldwin said. “I’m pretty silly when you get to know me though. But, on the basketball court, I would say I’m a silent assassin.”

Kamar is ambidextrous and uses it to his advantage. When he drives through the lane, his defender doesn’t know which side or hand he will shoot with, an uncertainty he takes advantage of regularly.

One play in particular shows how valuable this skill is. When Butler played Marquette in Hinkle Fieldhouse last year, Baldwin found himself at the 3-point line defended by Andrew Rowsey.

Rowsey had his body angled to force Baldwin to the outside, but Baldwin crossed over and darted down the lane with his left hand. Yet, at the last second, a Marquette defender came over to help on Baldwin’s left side. To counter, Baldwin switched back to his right hand and underhanded a layup from underneath the backboard to beat the defender.

“Not only can he finish with both hands, he can make passes with both hands as well,” Kampen said. “I don’t think there is another guy who seems as natural with his right hand when he is considered a lefty.”

There is still work to be done in the offseason to prepare for Baldwin’s junior campaign. Along with improving his shot, ball handling and passing, Baldwin must work on his body and get it ready to take all the hits and bumps that come in a grueling season.

The question that should be asked is not can Baldwin take on a scoring role, but if he can produce at a higher and more efficient rate than he has.

His strong play in his freshman campaign was a big reason why his role was expanded this year. On the stat sheet, Baldwin’s points and usage percentage —the number of plays a player is involved in — have soared, both increasing by 5 percent. Yet this increase in production led to a slight decrease in his field goal percentage and 3-point field goal percentage.

Kampen said he believes the statistic dips are not warning signs; they are merely areas of Baldwin’s game he will need to work on before next season.

“When the team needed him to score he stepped up and was that second guy behind Kelan,” Kampen said. “Now he’s going to have to take that next step and be the guy at the top of every teams scouting report.”

What made Baldwin so valuable was his shooting percentage and his ability to take and make smart basketball shots. He wasn’t taking 30-foot 3-point shots; he wasn’t softly tossing up circus layups. He was attacking the paint, getting to the free throw line and taking the shots he knew he could make. His 49 percent field goal percentage two seasons ago was among the highest on the team.

One of the largest changes Baldwin had to deal with this season was a change from his natural shooting guard position to point guard. This was a new challenge for the sophomore, and there were growing pains early on in the season. With the help of Jordan and other coaches, Baldwin was able to grow into the position.

“Coach Jordan has been great to Kamar in teaching him the intricacies of the game,” Butler’s radio analyst Nick Gardner said. “Not just telling him what to do, but explaining to him why he has to do them.”

The change in coaches has helped Baldwin transition his game from a defensive focus to an offensive focus. His freshman season, Baldwin played behind a number of veteran players in Holtmann’s system.

Last year, Baldwin’s offense took a backseat as Holtmann used him as a defensive specialist. Yet, upon his arrival, Jordan began to use Baldwin as a more integral part of the Bulldog offense.

Jordan knows how to teach. Now it is up to Baldwin to step up and be the scorer and leader the team will need next season. He has shown he can score in spurts, but Kampen believes Baldwin is capable of being the consistent player this team must have come next October.

“He has the ability to score at all three levels,” Kampen said. “And he is going to continue to improve his consistency and his shot from behind the 3-point line and his finishing around the rim. He’s a born scorer. He was able to put up those big numbers up in high school, and I suspect he will do the same thing here in the next few years.”