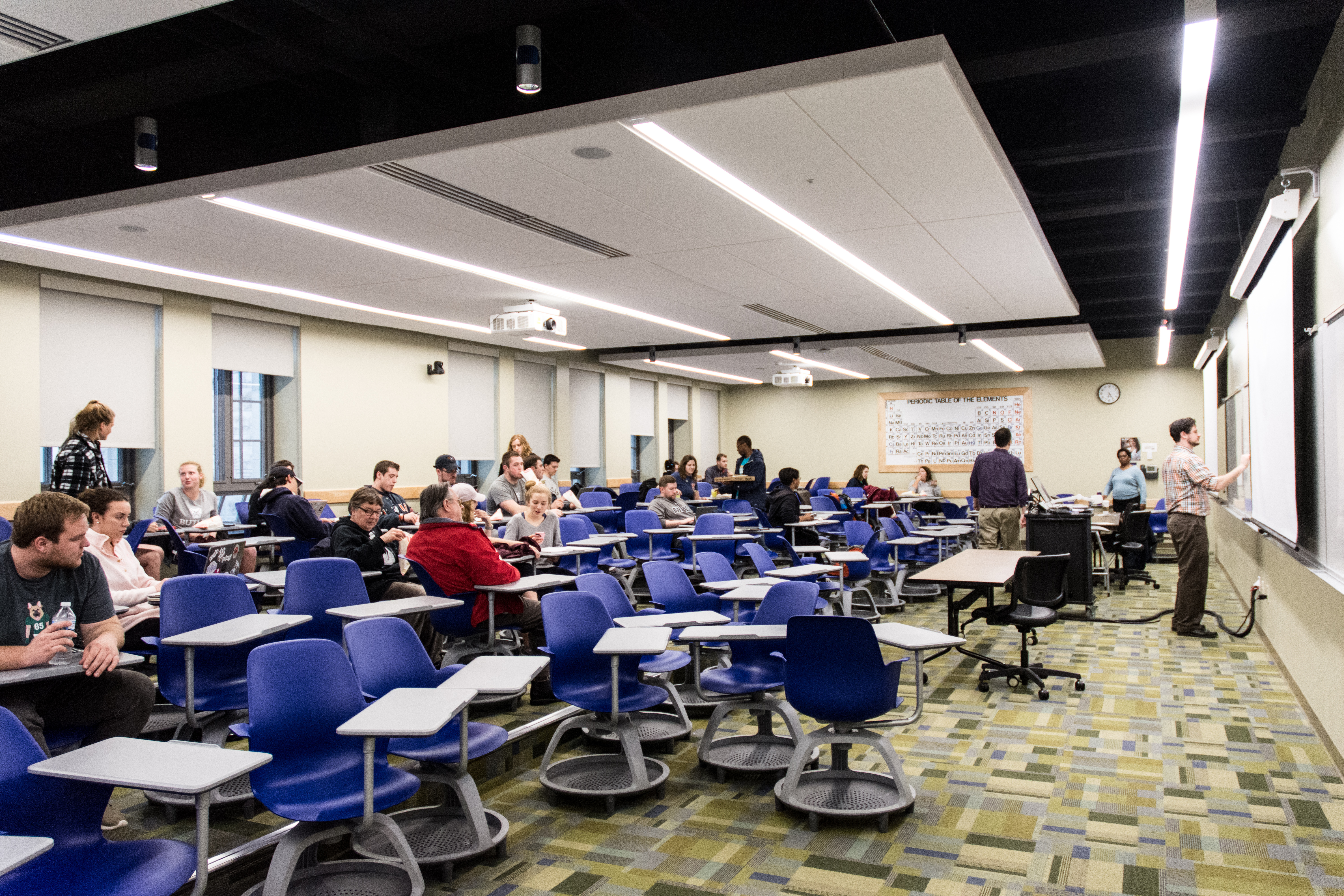 “The Uncomfortable Truth,” a film by Loki Mulholland, was shown on campus on April 2, with a question and answer session afterwards. Photo by Peter Larson.

Last Monday, in Gallahue Hall 108, the political science and peace and conflict studies departments, in coordination with history, anthropology, sociology and philosophy, hosted their first film in the inaugural Call to Action Film Festival, titled “The Uncomfortable Truth.”

Before getting into the film, it would be foolish to ignore discussing the actual event itself. The architects of the event were Terri Jett and Greg Shufeldt, political science professors, and of the political science department, and Elizabeth Vasilogambros, junior political science, peace and conflict studies, and strategic communication triple major.

The writer, director and editor of the film, Loki Mulholland, attended the event, and held a small question-and-answer session after the film. Also in attendance was Tony Davis of the Indiana Poor People’s Campaign, a local activist whose organization co-sponsored the event with the university.

Vasilogambros explained how she came to be a student organizer for the event.

“This semester, because it is my last one, I was like, ‘What is something to help the school and help my professor?’” she said.

She was also very impressed with the turnout.

“[Institutional racism] is not a topic, especially at Butler, you would expect people would want to go to,” Vasilogambros said.

The film tells the story of its filmmaker, a white man who, upon learning more about his mother, dives into his genealogy and family history and finds that members of his family were slave-owners and played a role in crafting the systemic racism that has plagued our country since our founding days.

It’s not a flawless film; it brings up the idea of Mulholland’s family having owned slaves, but then seems to ignore — or, at the very least, not fully address — this issue for much of the movie after brining it up at the very beginning. But even this does not take away from the overall impact of the film. By the end of the movie, the entire audience — close to 40 people, including Butler students. faculty and community members — was quite literally on the edge of their seats, leaning forward and fully invested as the credits rolled across the screen.

What made the movie stand out was more than just its tackling of a complex issue that many are afraid to talk about; it is a memorable film because of its unfiltered honesty. In one of the opening scenes of the movie, Mulholland gives a speech to an audience about how his grandmother used to speak fondly of the slaves she had and how they were “like family.”

An audible groan from the audience could be heard, and for good reason; it’s a cringy statement, caked in a racist-but-pretending-not-be coating. And Mulholland, after pointing out how horrible of a statement it was, looks physically and emotionally uncomfortable. Clearly, he does not condone her actions.

But toward the end of the documentary, Mulholland, speaking to the same audience in the film, says that he still loves his grandmother, despite her glaring flaws. He did not try to address the issue of systemic racism with a sense of moral absolutism. Instead, he presents someone trying to better understand something he has had the privilege to not fully face for much of his life.

The structure of the documentary helps the viewer understand this viewpoint. The film focuses on two people: Mulholland and an activist named Luvaughn Brown, a black man who was friends with Mulholland’s mother. In the film, Mulholland would introduce and briefly explain an important historical event such as the emancipation of slaves or the implementation of Jim Crow laws, and then Brown would describe how his life, and the lives of his friend and family, were impacted by these events. It helped add a human element to the story, a beating heart that kept it from becoming too academic and emotionless.

One of the most thought-provoking quotes from the film also came from Brown. Early on, he explained how the more he learned about America’s past and how institutional racism has existed from the very start, the more outraged and confused he became.

“There doesn’t have to be this grand conspiracy against black people,” Brown said. “It’s already built-in.”

As I watched the documentary, I couldn’t help but think of the 2004 movie “Crash,” though not because of the similarities between them, but because of how differently they approach the same issue. “Crash” tells the tale of multiple different people, all living in LA, whose lives intertwine on issues revolving around race.

Whereas “Crash” was the literal definition of morally absolute in its approach, obesely heavy-handed and obvious in its attempt to preach that racism is dangerous and harmful, “The Uncomfortable Truth” is nuanced and more subtle. But the most important difference is that Mulholland’s film is not satisfied with where it ends up. It knows it does not provide the answers, and it does not try to wring out sentimentality as a form of conclusion. Instead, it forces the viewer to address the issue of institutional racism.

And that, Mulholland said, was the goal. During the question-and-answer session after the film, Mulholland pointed out the truthful and eternally-fun-to-say tongue-twister that “you do not know what you do not know.” But he immediately followed that point up with an even more poignant one.

“When you see something like this, now you know,” Mulholland said.

I think most people who attended the event would agree with me that it was not an altogether optimistic event. It is hard to address the perpetual suppression and oppression of the voices and rights of a whole population of people and make it happy. But at the end of the event, I asked Mulholland a question that seemed to me to be intuitive: Do you feel optimistic about the future of eliminating racism in American culture?

His answer came as a little bit of a surprise to me.

“Progress has been made,” Mulholland said. “Has everything been solved? No.”

He then talked about how he presented his film at Brigham-Young University, and how the audience had been a mix of both black and white people.

He ended his answer with this, a thought that I has not let my mind since I heard it: “We’re forming a more perfect union, but we’re not there yet.”

It was Tony Davis, of the Indiana Poor People’s Campaign, however, who made the statement that I feel best sums up the experience. He explained his childhood, and how it was always the white students that jumped him, leading him for many years to hate all white people. He said it wasn’t until he became more educated that he realized who was really to blame, that the issue was far deeper than he had ever known, and how when he learned about the history of racism in the United States, he started to cry. He ended his speech with a powerful thought, but an even more impactful call to action to all those in attendance.

“I encourage you to stay engaged; fight the systems,” Davis said.