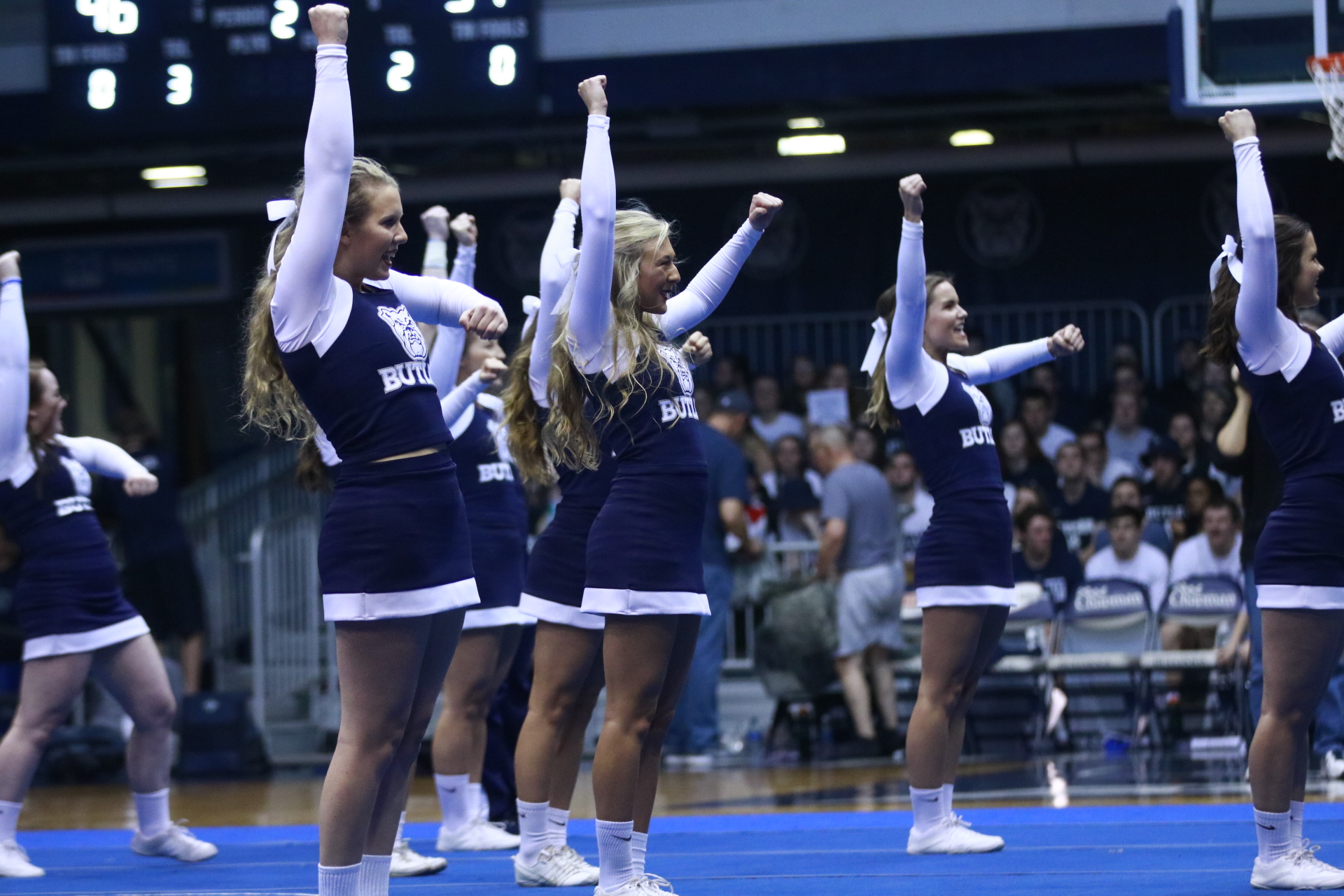 The morning of March 26, former Butler head cheer coach Jamie Troyer was already planning for her 20th cheer season at the school — scheduling end-of-year interviews with cheerleaders and talking about future changes.

But the biggest change came later that afternoon, when the team received an email from Mike Freeman, Butler’s senior associate athletic director, informing the team that Troyer was “no longer affiliated with Butler University.”

No reason was given as to why, and cheerleaders said they feel like they are in the dark.

“That’s the biggest question we’re all asking,” one member of the team said. “Why aren’t we told anything? Because honestly we don’t know. We honestly, truly don’t know. Obviously we have our speculations and whatnot, but we don’t know what happened that day. Honestly, that’s what we’re trying to figure out, too.”

Troyer’s name has been removed from Butlersports.com, and her contact information has been replaced by Freeman’s.

“I did resign last week,” Troyer told the Butler Collegian. “I am thankful and very grateful for the 19 years I spent at Butler and fortunate to work with so many wonderful people and develop a lot of good relationships.”

Butler Athletics declined to comment and said the situation was a “personnel item.”

Before being absorbed into the athletic department this past year, the cheer program operated under student affairs. As spirit coordinator, Troyer oversaw the cheer and dance teams, band and the school mascot. She reported to Anne Flaherty, the former dean of student life.

Flaherty is no longer employed by Butler as of March 29, three days after Troyer “had no choice” but to resign.

The school would not comment on whether there is a connection between Troyer and Flaherty’s departures, and provided the Collegian with the same statement as athletics, word for word:

“That’s a personnel item, and we don’t comment on those. Sorry, but no one from the department will be available for an interview regarding this topic.”

Troyer would not say why she left, but more than 24 hours after her departure, the team received another email. Assistant coach Mark Abarca forwarded a message from Troyer, which was then obtained by the Collegian. It reads in part:

“It hurts me to know that you may feel abandoned by my leaving Butler at this time. Please know that I sincerely had no choice in the matter.”

Karlette McClure, co-owner of Indiana Elite Cheer in Noblesville, hired Troyer as a cheer and tumbling instructor when the gym opened 14 years ago.

“We have no plans to let her go,” McClure said. “If [Butler] let her go, I think they would would be losing a great one.”

The Collegian reached out to 20 former and current Butler cheerleaders. Many asked not to be interviewed about their experience on the team. Others, including the team’s two assistant coaches, did not respond at the time of publication. Two cheerleaders who graduated within the past two years said they have nothing but positive things to say about their time on the team.

Four current Butler cheerleaders agreed to speak anonymously due to fear of losing positions on the team or being cut all together. They confirmed a situation in practice when Troyer used the n-word within the context of a song.

The team commonly plays music during tumbling sessions at practice. Cheerleaders said Troyer thought she heard the n-word in a lyric, then turned to several team members standing next to her at the scoretable and asked if they heard the n-word as well.

One person said they confronted the coach about the incident after practice, and Troyer then apologized.

Kennedy Smith, a current senior at Butler and former cheerleader, said she feels she was cut from the team two years ago because of racial discrimination.

“I wasn’t able to show my full potential because I was constantly not able to do something based off my hair color or my skin color,” Smith, who is black, said. “The way that she formed everything was based off looks. She would put you in a certain group based off hair color or skin color or height. A lot of times, I wasn’t included in anything because I didn’t fit the image.”

Smith cited occasions where she was isolated from stunt groups based on appearance versus ability. She also recalled a football game her sophomore year when Troyer “petted” Smith’s hair and commented on its texture.

“It made me feel weird,” Smith said. “I feel like a lot of situations that happened to me, I didn’t even realize how weird they were until afterward when I had time to reflect on my experience on the team. They’re almost like little microaggressions that I never even noticed until afterwards.”

Both Smith and the cheerleader who confronted Troyer after practice confirmed they were contacted via phone call by a private investigator working on behalf of the school in February. The investigator wanted to know about the team atmosphere and their experiences. No one from athletics had previously communicated there was an ongoing investigation of any form.

Smith said she brought up the football game. Then during team picture day, Smith said Troyer was unsure where to put her, because of her skin tone.

“It was just the small occasions that spoke very loudly to me,” Smith said.

Several current cheerleaders said the team was eating at a Mexican restaurant when Troyer warned them not to leave their wallet on the table if they did not want their belongings stolen.

“We would just tense up and just awkwardly look at each other,” one individual said. “Like none of us knew what to do, really. There would just be awkward silence for a hot minute. And then things would move on.”

Jaenichen said he believes Troyer never meant to hurt anyone with her comments.

“At the core of what she said, everything she said, I think everything was said with good intentions,” Jaenichen said. “But I could see how some people would be put off by some of the things she said. It was never anything to personally victimize or make anyone upset.”

But Smith said shrugging off uncomfortable situations relating to race is a problem Butler faces campus-wide due to the lack of diversity.

Athletics still has not acknowledged that there was an investigation, or what started it.

Cheerleaders who spoke to the Collegian described scenarios in which members of the team perceived Troyer’s comments to be body shaming by placing emphasis on how much they ate instead of encouraging healthy habits.

“I don’t think she meant it maliciously,” a cheerleader said. “But I just think that she wasn’t educated and wasn’t aware of what she was saying.”

The individual added that based off their experiences, the sport’s culture has moved away from connecting eating habits to appearances.

Examples include telling the team that it was OK to skip a meal to look good in their uniforms, or Troyer recalling times in her college career when she stopped eating to hit a stunt. Troyer never outwardly encouraged the team to do the same, but added that those tactics worked for her, cheerleaders said.

“It just made you feel like ‘Oh, am I doing something wrong? Is this what I should be doing?’” one individual said.

When asked about the possibility that some of Troyer’s comments can come across as body shaming, McClure said that to her knowledge, there has never been a similar experience at Indiana Elite between cheerleaders and Troyer.

“I am completely surprised,” McClure said. “I just don’t believe it.”

The Collegian tried reaching out to nine Indiana Elite alumni but did not receive responses at the time of publication.

On March 27, the team was originally scheduled to gather with the coaching staff that night in Hinkle to vote for awards and review try-out requirements. But after Troyer’s departure, the meeting yielded more questions than answers, and Freeman would not address why their coach had resigned.

“It literally came out of nowhere,” Jaenichen said. “I think that was the main thing, ‘like what’s going to happen?’”