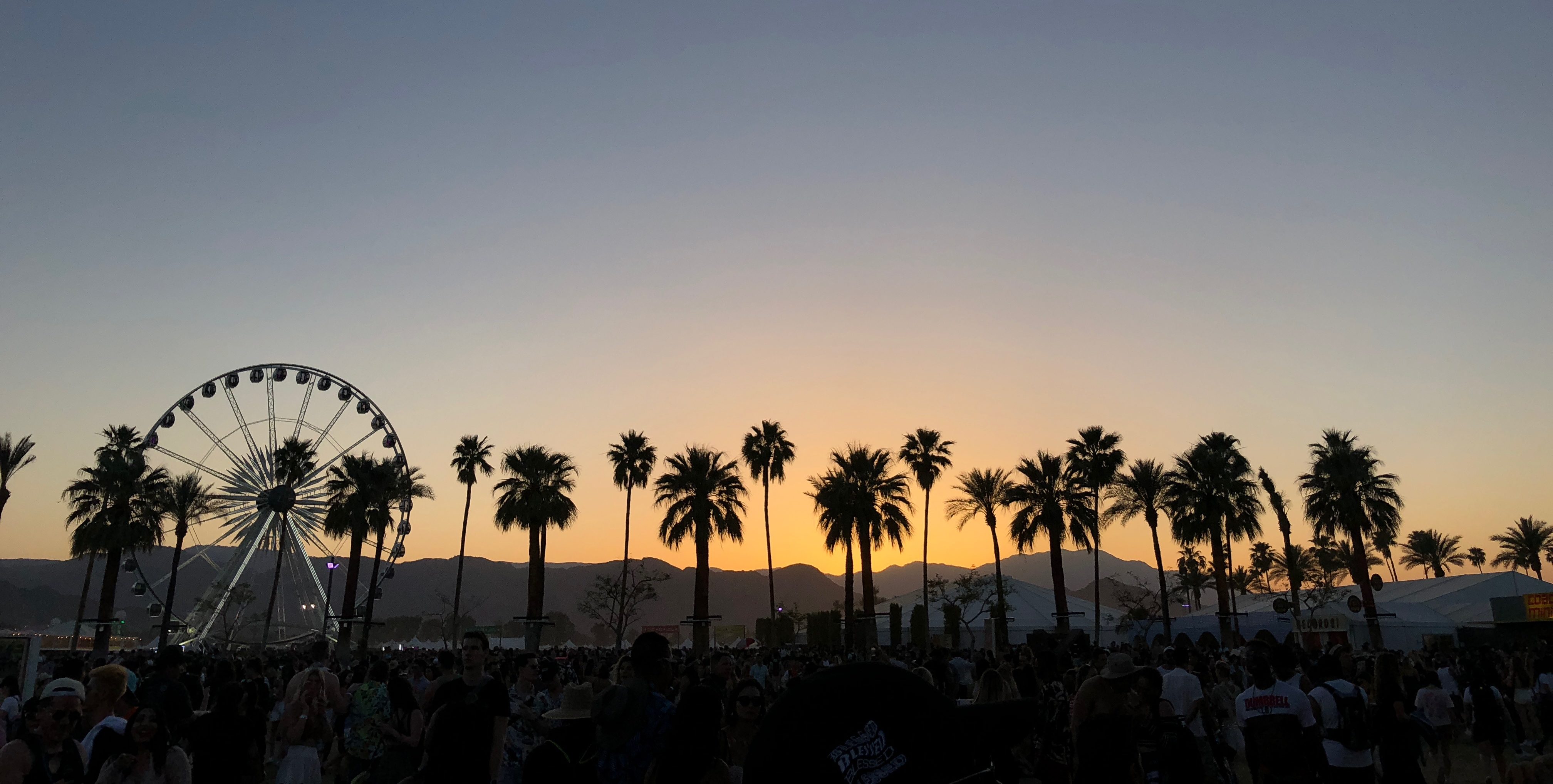 The sun sets on one of the biggest music festivals in the country, Coachella. Photo courtesy of Manali Patel.

Coachella 2018 had visitors from Butler this past weekend. Many bulldogs needed to escape the bipolar weather of Indiana and the stress of the final weeks of the semester and were lucky enough to attend. For the first weekend of the annual event, some students got to indulge in warm weather, music, and culture.

The Coachella Valley Music and Arts Festival is an annual music and arts festival held at the Empire Polo Club in Indio, California, located in the Inland Empire’s Coachella Valley in the Colorado Desert.

The event is one of the largest, most famous and most profitable music festivals in the United States and all over the world.

The event features musical artists from many genres of music, including rock, indie, hip hop and electronic dance music, as well as art installations and sculptures. Across the grounds, several stages continuously host live music.

What was most newsworthy about this year’s event is that Beyoncé made history being the first black woman to headline the event. The annual event was coined “Beychella,” and during her set she reunited iconic female group Destiny’s Child, and paid homage to historically black colleges and universities and greek organizations.

This year’s headliners also included The Weeknd and Eminem. Other artists include Cardi B, Migos, blackbear and Chloe x Halle.

Manali Patel is a junior who attended Coachella for a second year with her sister and two cousins. She said, “if you ever have the chance to go to Coachella, don’t turn it down.”

“Seeing Beyonce was absolutely amazing, you can’t really top that,” Patel said. “We also saw Gigi and Bella Hadid while we were eating pizza, so that was pretty awesome.”

However, with any major venture, planning is optimal, and Patel shares her advice for people who decide to go in the future, specifically regarding transportation.

“I would say definitely get a shuttle pass,” Patel said. “The first year I went, we relied on Uber and that was the worst idea ever. Coachella is in the middle of a valley where a lot of transportation can’t reach so trying to get to our uber, we would have to walk 2-3 miles. It was awful. The shuttles come and go every half hour and take you right into the middle of the valley.”

First years Sawyer Buck and Zach Falch also went to the festival together. This was Buck’s first and Falch’s fourth year going.

“There wasn’t just one thing that stood out the whole weekend really,” Buck said. “The whole festival was just such a different and intense experience.”

Artists prepare acts extensively for an event as big as Coachella.

“My favorite artist to see was probably Post Malone, but every artist there is amazing.” Buck said. “All of the artists we saw seemed extremely happy and grateful to be there, so no performance was bad because of that.”

One of the biggest trademarks of Coachella is the fashion and apparel sported by both the artists and guests. What goes too far and what’s not enough?

“For me, I didn’t really wear anything special, I just tried to dress for the weather.” Buck said. “I’d say the majority of people wore ridiculous, hippie like outfits. I’m not sure if it’s people trying to fit the ‘aesthetic’ of Coachella or if people just think it’s fun to wear some super wild clothing.”

While Buck and Falch may not have been invested in that part of the festival experience, Patel and her family embraced the culture and opportunity to experiment with outfits.

“My sisters and I were planning our outfits since we bought our passes in January. We kind of just ordered a bunch of stuff online then threw pieces together,” Patel said. “We also use our favorite Instagram fashion gurus to inspire our Coachella outfits.”

Often when people are picking outfits for music festivals or mainstream events there is a desire to match the “aesthetic” or vibe of the atmosphere.

“Coachella doesn’t really have a general aesthetic, surprisingly. Everyone just wears whatever they want.” Patel said. “A lot of girls go Bohemian, some go the outer space route. It honestly just depends. It’s a very open, loving, environment for sure.”

Zach Falch is a veteran of the Coachella experience.

“The first year you go is always going to be the most exciting year,” Falch said. “I can say that it’s overwhelming, nerve-wracking, and you’re just in complete ‘awe.’”

His celebrity encounters have only accumulated over the years.

“I remember I was just standing in the crowd and all of a sudden I look to my left, and A$AP Rocky brushed my shoulder. He told me to shush and then kept moving, and I just remember being completely shook,” Falch said.

Patel, Buck and Falch agreed that the line-up of musicians was not as strong as previous years. This made planning for the night ahead important.

“There’s so much art and other stuff going around. So, it’s very easy to kinda get lost in the moment,” Falch said. “I’d say planning who you want to see at night is probably most important.”

Falch said his favorite performance was from Brock Hampton. Despite having a smaller crowd in comparison to other artists on other stages, the performance had more intention and meaning overall.

“The show was choreographed to a tee. It was super artistic and powerful to watch,” Falch said. “During it a lot of the people on stage wore shirts of derogatory things that they’ve been called, and then there was a moment when he [Hampton] took a knee while everyone else was standing. It was just amazing.”

Coachella is an experience that people nationally and internationally come together to celebrate music and culture. Now students are back on campus pushing through finals.