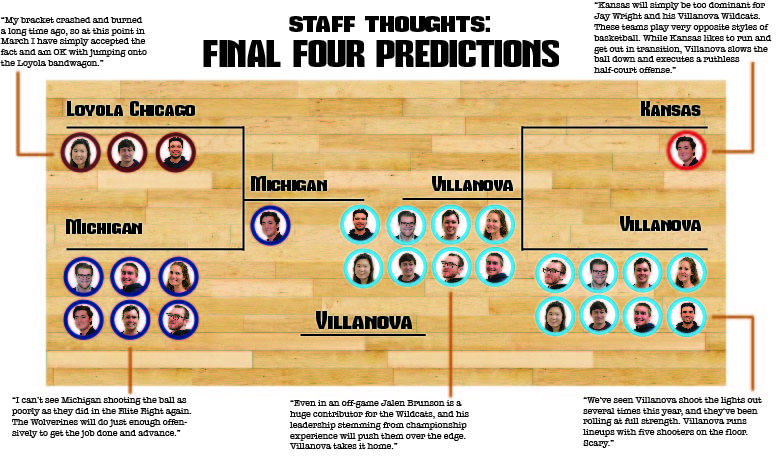 See how your Final Four picks fare against the Collegian sports staff bracket. Teams with the most number of votes move on to the championship. Graphic by Dana Lee.

Loyola vs. Michigan: Michigan is a fun team to watch. Moe Wagner is an elite player, and Charles Matthews and Muhammad-Ali Abdur-Rahkman are the truth. That being said, I think Loyola will ride this wave to the championship game. You have to believe they are a team of destiny. Clayton Custer… Ben Richardson… Donte Ingram. All of them bring buckets.

Villanova vs. Kansas: Villanova simply has too many weapons, as Butler witnessed firsthand this year. While Kansas is skilled and boasts some electric players, Villanova’s discipline will give them the edge. We’ve seen Villanova shoot the lights out several times this year, and they’ve been rolling at full strength. Villanova runs lineups with five shooters on the floor. Scary.

Villanova 85, Loyola 75: Once the Big East representative beats the Jayhawks, it will be tough for the Ramblers to contain their opponent. A lot of the Wildcats have played on the biggest stage before. There is no substitute for that experience. Jalen Brunson is the best player in the country. There, I said it. You’ll be seeing Mikal Bridges in the NBA very soon. In one shining moment, the Wildcats will capture their second championship in three years.

Michigan vs. Loyola: Both teams are in the top 10 in points allowed, so every bucket will be well-earned. I expect a very tough, competitive game, but Moe Wagner, Charles Matthews and Muhammad-Ali Abdur-Rahkman will be too much for the Ramblers. I can’t see Michigan shooting the ball as poorly as they did in the Elite Eight again. The Wolverines will do just enough offensively to get the job done and advance.

Villanova vs. Kansas: Villanova proved they can win basketball games in many different ways against Texas Tech. There is only one team that can beat Villanova when they are at the top of their game and that was the Duke Blue Devils. I think the combination of the Wildcats’ elite perimeter play and the inside presence of Omari Spellman will be too much for the Jayhawks. ‘Nova goes to National Championship for the second time in three years.

Villanova 79, Michigan 74: Villanova is going to cut the nets down in San Antonio. Michigan has been great in the tournament but the best performances against them have come from guards and other perimeter players. Nobody has better perimeter players than the Wildcats. If Michigan wants to win this game they have to play phenomenal defense and score with the country’s top-ranked offense. I just don’t see it happening.

Michigan vs. Loyola:  The Wolverines are too good and too hot to let this one slip away. Loyola has been incredible but it’s hard for me to see them going to the finals. They haven’t played a team as hot as Michigan in the tournament. Charles Matthews and Muhammad Ali-Abdur Rahkman will be too much to handle for 40 full minutes. The Ramblers will remain scrappy and competitive and I believe the game will come down to one possession but my gut tells me Michigan.

Villanova vs. Kansas: Villanova is winning this game. Period. Jay Wright and his boys are hungry and ready to make a statement against Kansas. Jalen Brunson is arguably the best player in the country and he will continue to facilitate this high octane offense to victory. Villanova is the best team in this tournament and I have them winning it all.

Villanova 81, Michigan 79: Villanova will be storming the court once the clock runs out. This will be a highly contested game and a championship for the ages. Michigan won’t go down without a fight but Villanova is too deep and potent for the Wolverines to handle. This one will be a shootout in San Antonio.

Loyola vs. Michigan: The Ramblers have proved to be deceptively quick in the tournament, checking multiple teams who hadn’t game-planned well off guard. In each of the team’s shocking wins, a different player has stepped up to lead the way with hot shooting, showing the team has the depth and the defense to hold off even the best of teams. I doubt Michigan will shoot as poorly as they did in the Elite Eight, but I think Loyola will be able to contain them enough to grab another improbable victory.

Villanova vs. Kansas: Villanova is simply the best team in America right now. While it all starts with Jalen Brunson, the Wildcats have shown they’ve got variety of scoring threats and ability to win games in a variety of ways.

Villanova 82, Loyola 71: As much as I’d like to pick Loyola to go all the way, I think there’s just no stopping Jay Wright and Villanova. They’ve got the depth and most importantly, the experience that Loyola doesn’t. I think that may very well be the difference.

Loyola vs. Michigan: Both of these teams are playing elite defense right now and are similar in the way they play. The difference is that Michigan has Moe Wagner and I have no idea how the Ramblers are going to guard him. He really struggled against Florida State and I’d be stunned if he shot that poorly again. On top of that, John Beilein is the most underrated coach in college basketball. Loyola Chicago’s memorable run comes to an end and the Wolverines advance.

Villanova vs. Kansas: Watching Jalen Brunson and Devonte’ Graham go at it with a berth in the national championship game on the line will be an absolute treat. Malik Newman was nothing short of spectacular down the stretch against Duke, but Villanova’s defense will make life much more difficult for him than the Blue Devils did. I’m rolling with Jay Wright’s squad.

Villanova 75, Michigan 68: In a game featuring two teams that take care of the basketball and don’t beat themselves, individual talent will determine the winner. Villanova has three of the best four players in this matchup in Jalen Brunson, Mikal Bridges and Omari Spellman. Spellman is athletic enough to stay with Wagner and the Wildcats’ guards will take control of the game in the second half, giving Villanova their second title in three seasons.

Michigan vs. Loyola: Although Loyola Chicago is really quick on their feet and have a phenomenal defense, I don’t think they will be enough to stop Moe Wagner. Wagner is an elite player all around and he didn’t have a fantastic game against Florida State and I don’t believe that he’ll let himself have two bad games in a row. It’s been a great run for the Ramblers, but every great run has to come to an end.

Villanova vs. Kansas: Hands down, Villanova is going to win this game. Jalen Brunson is one of the top guards in the NCAA, if not the best. Brunson paired with Mikal Bridges is going to be lethal and impossible to stop. Though I think it’ll be a close game, I’ve got Villanova coming out on top.

Villanova 79, Michigan 75: This will no doubt be a great game. You’ve got one of the top defensive teams in the nation with Michigan and one of the top offensive teams in the country with Villanova. Though Michigan’s defense is difficult to penetrate, Bridges and Brunson are going to take this game and run with it. Villanova’s shooting is phenomenal and we’re going to see that in San Antonio.

Michigan vs. Loyola: Loyola’s surprise run has been great, but Michigan will be too much for them to handle.  Both teams bring extended winning streaks into the game, so it should we well contested. Loyola hasn’t yet faced a player like Moe Wagner and will struggle to contain him. Even after an off-game, it has to be expected that he rises to the occasion this time around.  Michigan advances.

Villanova vs. Kansas: Malik Newman looked unstoppable against Duke and should keep the Wildcats on their toes. This is Villanova’s year, though, and they won’t be stopped.  Spellman, Bridges, and Brunson create a three-headed monster that will prove unbeatable, and late tournament experience for much of their roster is just icing on the cake.  Villanova advances.

Villanova, Michigan:  Again, one great player will make Villanova work for it, but their three will not be bested.  Even in an off-game Jalen Brunson is a huge contributor for the Wildcats, and his leadership stemming from championship experience will push them over the edge.  Villanova takes it home.

Loyola vs. Michigan: My bracket crashed and burned a long time ago, so at this point in March I have simply accepted the fact and am OK with jumping onto the Loyola bandwagon. I don’t expect Michigan to roll out the red carpet for Sister Jean and the Ramblers, but I also think teams have consistently underestimated Loyola’s offense.

Villanova vs. Kansas: Villanova has all the tools they need to make it to the National Championship. They have natural scorers in Jalen Brunson and Mikal Bridges, and as of late, the team has been playing with a lockdown defense. The combination is going to prove to be difficult for Kansas to beat.

Villanova 85, Loyola 74: At the end of the day, Villanova has the experience playing on a national stage that Loyola does not. That experience is going to be crucial in the first 10 minutes, and it’s going to show. Don’t be surprised if Villanova runs up a 20-point lead in the first half.

Michigan vs. Loyola: Loyola’s weakness is their lack of size on the inside, as they do not play a big man over 6 feet 9 inches. Michigan’s dominant big men Moe Wagner and Jon Teske will take advantage of the Ramblers on the block. If Loyola has any chance of winning, they must find a way to consistently hit their 3-point shots. These are baskets that Michigan rarely gives up, as they are one of the best teams in the country at guarding the perimeter.

Kansas vs. Villanova: Kansas will simply be too dominant for Jay Wright and his Villanova Wildcats. These teams play very opposite styles of basketball. While Kansas likes to run and get out in transition, Villanova slows the ball down and executes a ruthless half-court offense. Even though Villanova could heat up, I believe the committee of Devonte’ Graham, Malik Newman and Udoka Azubuike will match the speed and scoring of the Wildcats.

Kansas 78, Michigan 71: Kansas and Coach Bill Self will be too much to handle for the Wolverines. As long as they are able to contain the dynamic play of Moe Wagner, Kansas should have no problem getting past Michigan’s defense. Kansas has a roster full of players with the ability to score, and they will need them come National Championship day.