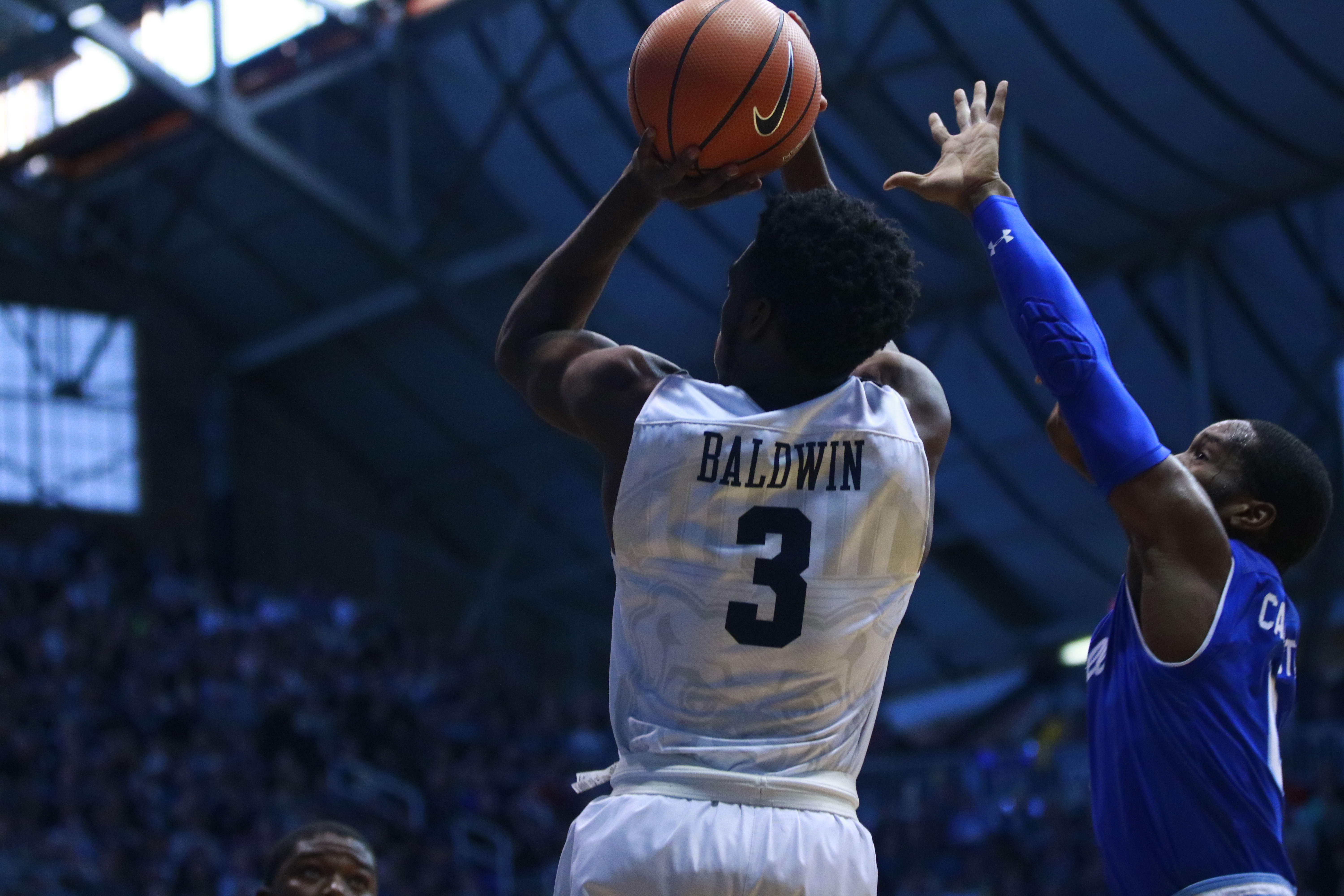 Kamar Baldwin sets up for a shot. Baldwin and the Bulldogs enter the Big East Tournament as the No. 6 seed. Jimmy Lafakis/Collegian file photo.

Thursday will make way for a legendary showdown at the world’s most famous arena. Emotions will be riding high. It is tough to beat a team three times, and Kelan Martin and Tyler Wideman remember when Providence did exactly that to them two years ago. Although Seton Hall will likely come out at full strength, another herculean performance from the Big East’s most valuable player will be a boon and boost the Bulldogs to victory.

The postseason starts this Thursday when Butler willtry and record their first Big East Tournament win. After back to back bad losses, I would say the matchup with Seton Hall is a “can’t lose” for Kelan Martin and his Bulldogs. After being a virtual lock a few weeks ago, poor play has put Butler right back on the bubble. Even though Butler still has a good chance to make the NCAA tournament field, a win on Thursday would only help their chances. We know Martin can show up and score on the big stage, but I will be watching to see how Kamar Baldwin and Paul Jorgensen adjust their game to help the team make a tournament run.

Chris Brown: While everything hypothetically resets during tournament season, momentum is definitely a factor. A loss in the first round of the Big East tournament shouldn’t prevent Butler from hearing their name called on Selection Sunday, but three straight losses heading into the Big Dance could certainly be difficult to overcome. Scorers besides Martin will need to step up if this team wants to advance far into March.

Josh Mullenix: A win in the Big East tournament would make Selection Sunday a lot easier to sit through even though the Bulldogs are probably in the field of 68 without one. Butler’s performance against Seton Hall on Saturday isn’t encouraging, but it’s hard to beat a team three times. But one thing is for sure, the offense needs to be more balanced. Martin can’t be scoring 50 percent of the points for the Bulldogs to be successful and Butler must dish out more than six assists if they want to grab their first Big East tournament win in history.

Ashley Fulbright: A Big East Tournament title is more than probable for Butler but that could change at any time. Butler gets in the habit of playing to the abilities of their opponents instead of playing their own game. The other key to the title will be having all hands on deck. Kelan Martin has been pulling the Bulldogs through the season but Butler is going to need more than one threat for success in the tournament.

Jarod Lipson: While Butler has done enough to show that they are capable of winning the Big East tournament, they have done more to show that they won’t take advantage of this ability.  An inability to hold leads, an inability to close out close games, and an over-reliance on Kelan Martin are all alarming and won’t work against the likes of the Big East. Inconsistency has been the defining word of Butler’s season, from game to game, and from half to half.  The Bulldogs have the talent to win the tournament, but I wouldn’t trust them to remain consistent for an entire game, let alone three.

Graeme Wright: Tourney season is a new season. The Bulldogs do have the ability to beat anyone they step on the court with. They are capable of winning the Big East tournament and making a deep run into the big dance, but they will need to be able to finish games. They need to be physical and nasty and up their sense of urgency immensely.

Joshua Doering: A win in the Big East Tournament would be a huge boost to the Bulldogs’ NCAA Tournament hopes.

They’ve most likely already punched their ticket, but selection Sunday will be mighty stressful if they leave New York without a victory. Butler should have beaten Seton Hall the first time they played and it’s extremely difficult to beat any team three times. The Bulldogs have a good shot at finally getting the first Big East Tournament win in program history.

Dana Lee: In light of the loses against St. John’s and Seton Hall, getting a first-round win in the Big East Tournament means everyone can sleep a little easier heading into the Big Dance. You absolutely do not want to make a run into March on a three-game losing streak. Sean McDermott and Paul Jorgensen need to become scoring threats again if Butler is going to win against Seton Hall.