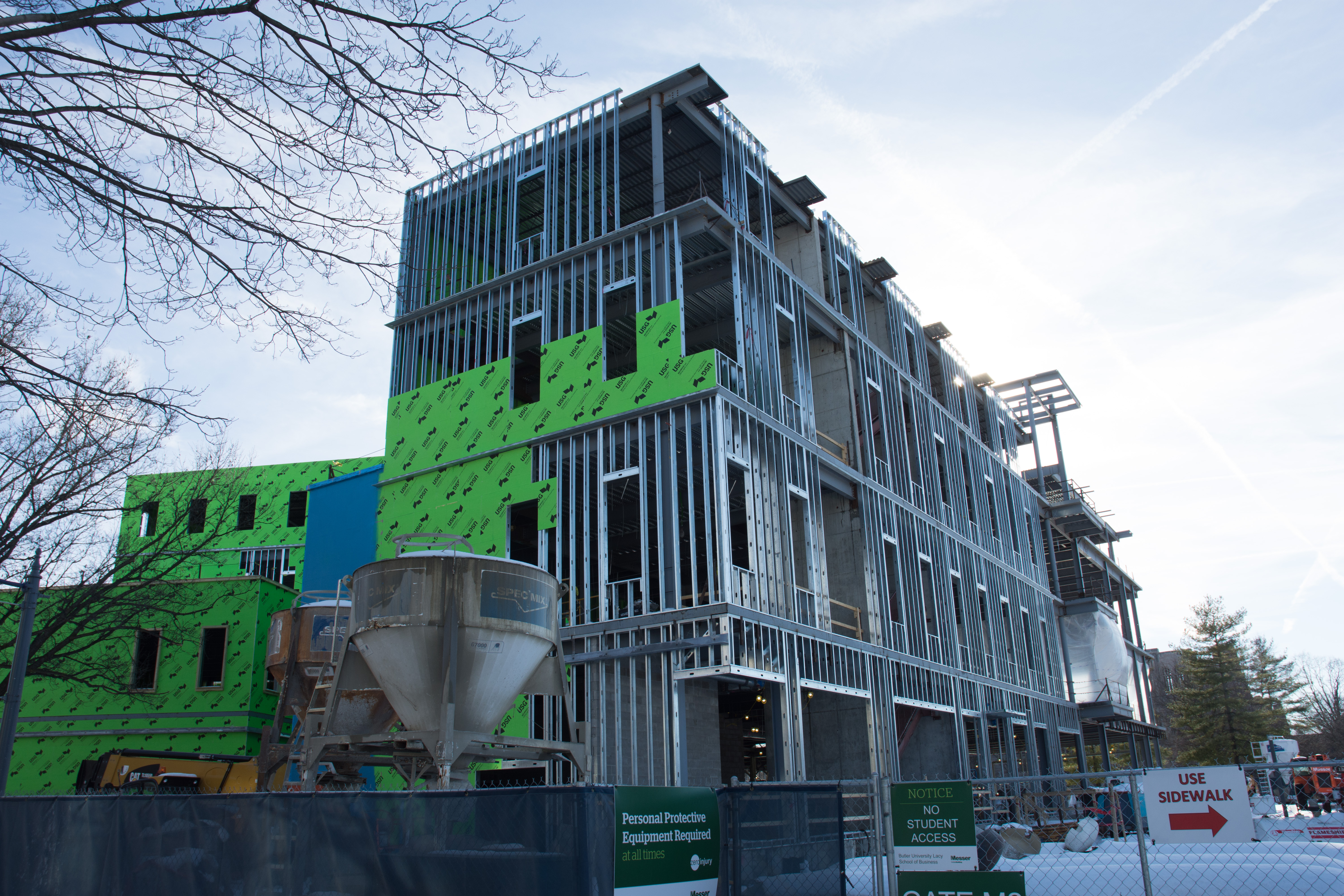 The new Andre B. Lacy School of Business building is on track to open for classes in Fall 2019. Photo by Peter Larson.

Butler University students and faculty are looking forward to the new Andre B. Lacy School of Business, which will feature collaborative classrooms, work spaces and a highly-anticipated Einstein Bros. Bagels cafe.

The new building costs around $50 million. LSB Dean Stephen Standifird believes that the new building will help take the business school to “a whole new level.”

“It is really difficult for us in our current space,” Standifird said. “The facilities have always been a challenge for us, and the new building will change that dynamic.”

With regards to the new bagel shop, Standifird said it is likely that it will happen and he believes it is something that is already decided. If it is not an Einstein’s, it will be something similar.

“We are legitimately creating a basically similar footprint to what you see in Starbucks, and I think Aramark will probably manage it just like the Starbucks is managed,” Buerger said. “It’s likely going to be an Einstein’s.”

The new building, which will be located next to Irwin Library, could also feature more than an Einstein Bros. Bagels in the future.

Amanda Doenges, director of engineering and administration, confirmed the new building has a space built in for a potential future cafe. She also confirmed the project is still on track to meet its deadline.

“It’s coming along quickly,” Doenges said. “I am excited, I think it’s a really cool project in a very prominent area of campus. The construction team is doing a great job.”

There will be around 10 traditional classrooms and roughly 70 office spaces that come in all different forms. Some of these spaces will have four walls and a door, but there are also open-plan faculty offices that will be within these spaces.

“What’s a little different about higher-ed buildings these days is that they are not just classroom buildings anymore, and I think everybody kind of knows that,” Buerger said. “So, if you look at the basic facts there are around 10 or so legitimate formal classrooms. But you could probably triple the number of those spaces and say there’s learning environments that are capable of whatever kind of space it needs to be.”

Because the business college has gone from around 600 students to more than 1,000 in the past five years, they have outgrown their current space.

“A lot of it is space we’ve never had before,” Standifird said. “The advantage for all that space is that it helps brings executives into the building, so they can be more interactive with students.”

Standifird said most business classes are not taught in the business building due to the small size. The new building will be able to have a university career services center, a center for internships, and a classroom dedicated to the Real Business Experience class.

Students will be able to spend more time in the new business building because all of their classes and resources will be in one spot.

“The new space…lets us do what we do but deeper and better,” Standifird said. “A key part of our approach is about getting the students deeply connected with the business world. It will deepen the ties of relationships we have already have.”

Overall, Standifird said he is enthusiastic about the new building and said it will help make the Lacy School of Business a “premier business school.”

“My colleagues really deserve this space for all of the amazing work they do,” Standifird said.  “I’m getting really excited about what will come out of this.”

Students are also excited for the new building and all of the amenities that will come with it.

Connor Stevens, sophomore business major, said that although he will only have the new building for one school year during his senior year, he thinks the building is really important for new students.

“I’m super excited,” Stevens said. “I feel like it’s really innovative and a new step towards expanding the business school and bringing in new technology to it.”

Even though it is a business building, Stevens believes that it will be used by everybody because of the rooftop lounge area and the Einstein Bros. Bagels.

“They always say the business world is constantly changing, and the business school on campus should too,” Stevens said. “Building the new building is a vital source to sort of take us in that direction.”

Some younger students, such as Bella Ruscheinski, first-year business major, will have the new building for two years.

“I saw some pictures recently and I didn’t know we would have a cafe,” Ruscheinski said. “The conference rooms look really nice. I wasn’t expecting it to look like that.”

The new building is more of an appeal to go to classes and it makes Ruscheinski excited to be able to have all of her classes in one building.

“I chose Butler because of the Lacy School of Business,” Ruscheinski said. “It makes sense we are expanding it. It will provide us with more opportunities and, if we can build a building in two years, who knows where else we could take it.”

Ruscheinski said she is looking forward to the Einstein Bros. Bagels because it will be a great place for another communal area.

“Starbucks is always really cramped,” Ruscheinski said. “The bagel shop is really dangerous. I’ll be there a lot. The rooftop patio will be nice, too. I think it will make Butler look prettier overall, along with Fairview and Irvington.”

It was confirmed that the current building for the Lacy School of Business will be renovated due sometime after the new building is complete.

“I think a lot of the interior in the business school will be reused because it is in pretty good condition,” Buerger said. “What we will change and improve is the infrastructure, heating, air conditioning and electrical. All of those things will be improved, [as well as] some cosmetic things too.”

The new Lacy School of Business building will open in fall 2019.