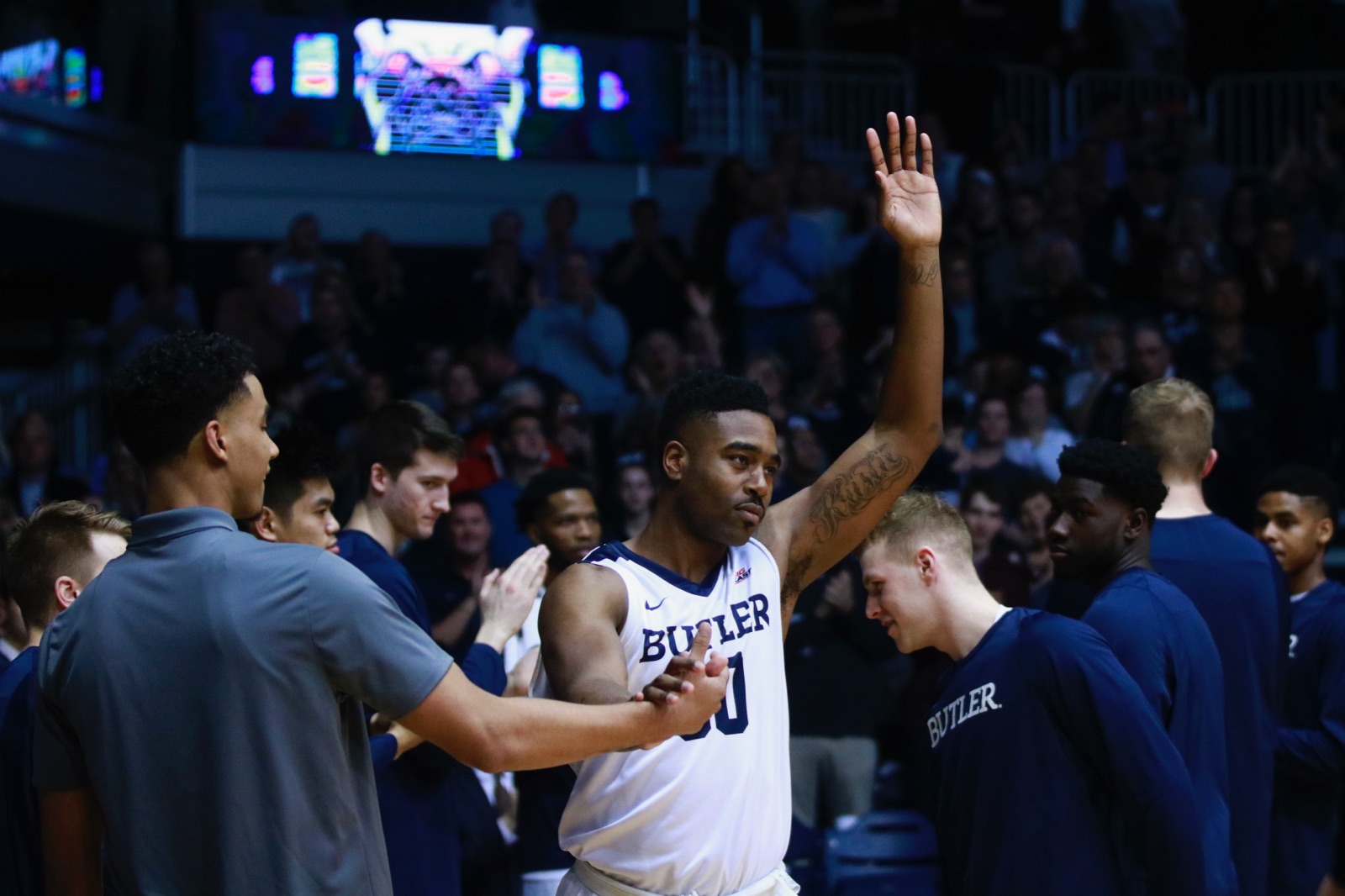 Kelan Martin gets introduced to the crowd at Hinkle Fieldhouse for the final time on Feb. 20. Martin scored 26 points in the 93-70 victory over Creighton. Photo by Jimmy Lafakis.

Tuesday night was the final time Kelan Martin and Tyler Wideman would play in Hinkle Fieldhouse. The Bulldogs topped Creighton 93-70, but the main focus was senior night, which got everyone in the feels.

It’s been an honor playing in Hinkle for four years, thank you for everything ????

Standing ovation for Kelan Martin as he finishes his last game at Hinkle with 26 in a dominating win over Creighton #JR213 pic.twitter.com/QcwPHFMPWF

That’s all of us, Shannon.

“I don’t even know them personally.” -Shannon crying at the Senior Night video for the basketball players

In @HinkleFH ready for the @ButlerMBB game. Pretty sure I’m going to ugly cry during the post-game. #GoDawgs #SeniorNight

You can’t just leave those guys.

On a Tuesday night, after 9pm, inside a somewhat muggy Hinkle Fieldhouse, I’d estimate more than 6,000 fans have stuck around to celebrate our seniors. #ButlerWay pic.twitter.com/CjHf3RqlDm

He’s someone to take advice from.

thank you @Trw31_45 @kelan30_ for all you have done for the program! There is plenty of time to add one final chapter #GoDawgs

“That’s my brother.” -Wideman on Martin

A much deserved tip of the hat to kelan and tyler. Been through a lot in 4 years, held strong. Go out with a bang tonight when it’s needed most fellas. pic.twitter.com/s6j5KBuBVz

How can you not be happy with that performance?

What a night? What a career!

What a senior night for @ButlerMBB #dawgs!

All of the above.

If @ButlerMBB has made you cheer, smile, laugh, or talk ? to Xavier/IU fans in the last 4 years; you need to be in Hinkle Fieldhouse tonight! Swipe $30 on your ? and get 3 of your best friends!!! pic.twitter.com/g0T7yF40jr

A side not everyone can see.

These two guys with my two guys. @Trw31_45 and @kelan30_ have been favorites in our family for a long time! @ButlerMBB #SeniorNight pic.twitter.com/JmuXwBu777

we are so excited to cheer on @butlermbb one last time in hinkle tonight ?? pic.twitter.com/J8dIPyQ4nv

Sometimes (most times) life comes at you fast.

Life comes at you fast. pic.twitter.com/aVpJZIjrfa

“They didn’t have to embrace a new coach but they did, because they’re loyal to @ButlerMBB.” ? pic.twitter.com/epe8O6JRPf