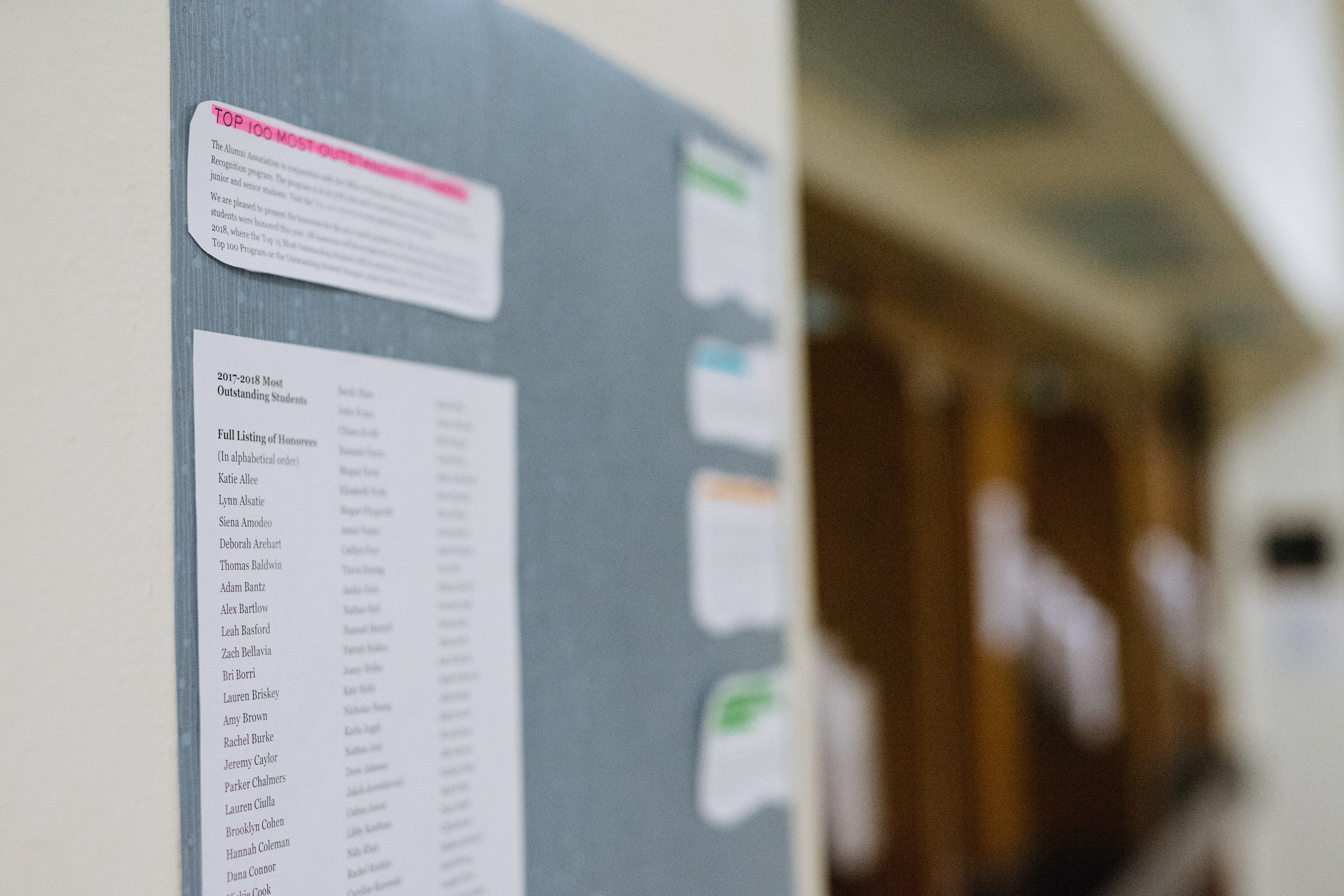 The Top 100 bulletin board in Jordan Hall. Photo by Adam Cvik.

For the second year in a row, Butler University’s Top 100 Most Outstanding Students list honored more than 100 students this year. Due to a tie in scoring, there were 101 honorees.

This is the program’s 57th year of honoring the top Butler juniors and seniors, according to the Butler website.

Anyone can be nominated by friends, faculty or staff. The only requirement being that the nominee has a grade point average of 3.5 or above.

This was the first year judges reviewed the applications blind, meaning that they do not see students’ names, only the application number. Faculty and administration make up the judges panel.

Vice President of Student Affairs Meg Haggerty, who manages the program with Associate Director of Alumni and Parent Programs Jennie Jones, said they wanted the process to be more fair and impartial.

“Once every judge has evaluated the application pool that they have been given, they just let us know that they’re done and once all of the judges have completed their review process then Jennie and I turn off the judging process and start the next part of the cycle,” Haggerty said.

The applications then go through a conduct check to make sure the student does not have any academic integrity issues or is on probation of a conduct violation.

If there are students that have a conduct violation, those names are removed from the process and they are not considered a top 100 student.

Once the conduct checks are finished, they announce the winners.

This year there were almost 500 nominations and more than 300 applications were filled out to be considered for the top 100.

In the past, the program would typically see about 600 applications. The nominations were a lower this year due to the added GPA minimum for eligibility.

Baldwin said he was surprised but also content when he learned that he had been selected as one of the top 100.

“Initially I was surprised, but I think that looking back Butler does a great job at recognizing students for their hard work,” Baldwin said.

Senior Katie Allee, communication sciences and disorders and Spanish double major, is also on the top 100 most outstanding students list.

“Basically, you get an email saying you’re nominated and it gives you a link to an application website with instructions on how to submit,” Allee said. “You type in a resume, type in each thing individually, and there’s a page for an essay and you have to write an essay as well. The prompts were about education and how education is a privilege.”

Allee said she was anxious for the list to come out, but was really happy and excited to learn that she was on it.

“I didn’t expect it,” Allee said. “But finding out my best friend got it as well made me more excited. It shows the work we put into our education. It was special, and I’m flattered and honored.”

Allee said she did not think of herself as doing that much on campus, but at the same time she said she put a lot of work into Butler.

“I’m proud of myself and my friends,” Allee said. “It was the basis to help get me to where I am now.”

Jones explained the students who were on the top 100 list can then choose to participate in round two of the process to be considered for top 15.

“Each student has the opportunity to submit up to three letters of recommendation, to be considered with their application,” Jones said. “And those go into consideration for our top 15 most outstanding student awards, which is the highest honor in the program.”

Only students in the top 100 can be considered for the top 15.

“If they don’t make the top 100, they’re sort of out of the process,” Jones said. “Anyone who is in the top 100 doesn’t have to submit letters of recommendation, everyone is reviewed in the second round for consideration of the top 15 but some students opt not to submit any letters.”

The second round is very similar to the first round. A new committee made up of representatives across campus go back through and review each candidate application and the letters of recommendation and provide a score.

“It is completely a new set, a new fresh set of eyes that are reviewing everything,” Haggerty said.