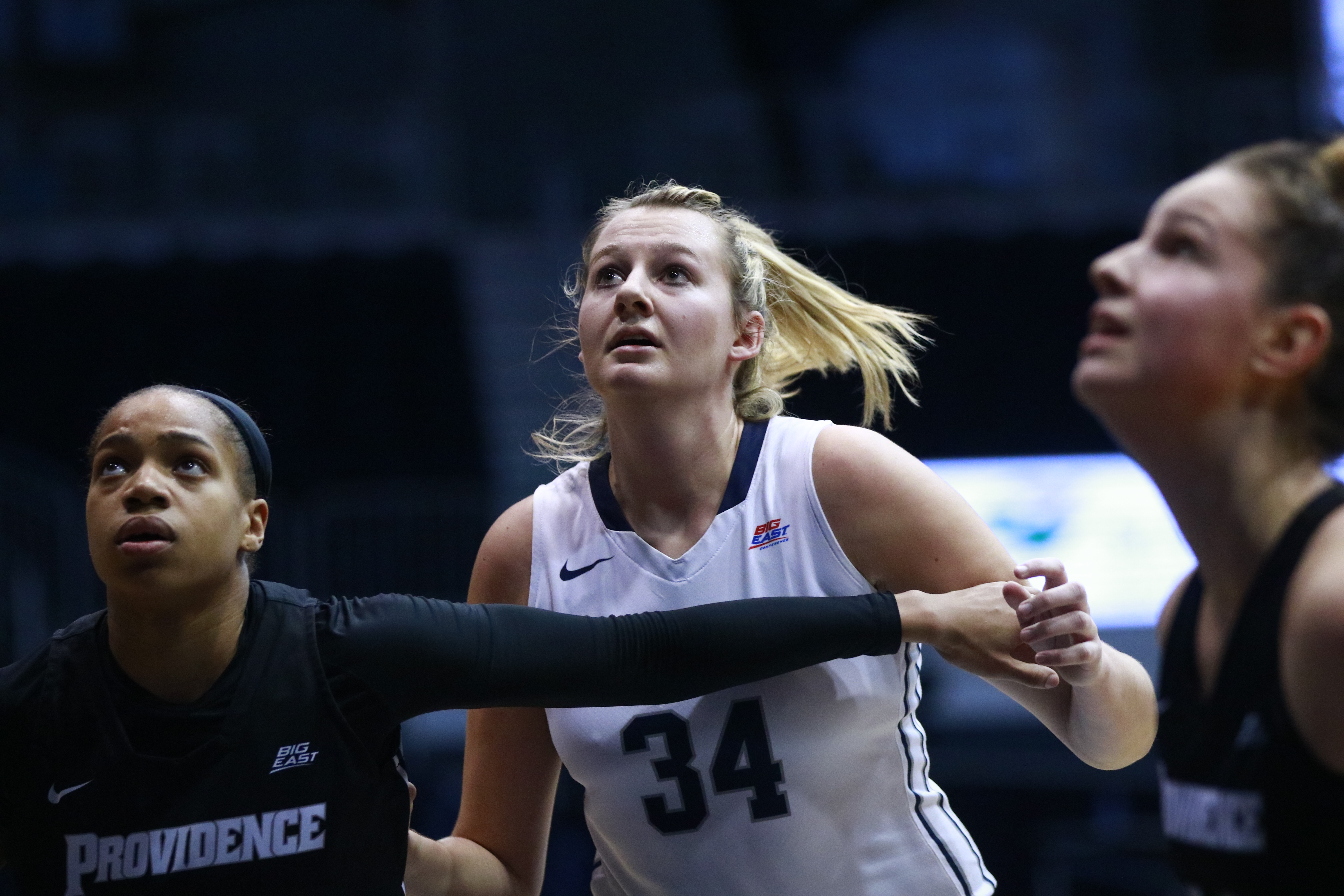 Schickel goes up for a rebound in a game earlier this season. The junior leads the team in rebounding and is second in scoring. Collegian file photo.

Tori Schickel didn’t have high expectations. Not entering her freshman season, at least.

“I was just kind of more here, just living life,” Schickel said. “I was just playing, and if you play well, that’s how it was.”

That mindset began to change after her first regular season college basketball game, when Schickel scored 29 points and tallied 22 rebounds.

“I was kind of like, ‘Wow, I can do this. I can have an impact on this team right away,’” Schickel said. “‘This is what I can do my whole career.’”

While that game was a big moment for Schickel, it also made her head coach realize the talent she brought to the team.

Over the past three seasons, the center has undoubtedly been nothing short of a special player. After a promising freshman season, Schickel emerged as a star for the team last season, breaking the Butler single season rebounding record with 364 boards while averaging nearly 15 points per game.

In the midst of her junior season, Schickel averages a team-leading 10 rebounds per game, and is the team’s second-highest scorer. On Jan. 10, she became the 22nd player in program history to reach 1,000 career points.

But what statistics and record books don’t show is Schickel’s more elusive transformation that has taken place over the last three seasons. Her teammates, coach and Schickel herself describe the transformation from ‘The Silent Assassin’ into a vocal team leader who is lifting the team up to its current success.

“[Our] freshman year when we first got here, she used to almost never talk at all,” junior guard Michelle Weaver, Schickel’s roommate, said.

On the court, Schickel wasn’t especially vocal. On a team led by seniors Belle Obert and Blaire Langlois, she didn’t necessarily need to be.

“We didn’t play through her as much [her freshman year],” senior guard Sydney Buck said.

But as Schickel began to prove herself on the court, that would change. When she was named a team captain prior to her sophomore season, she realized she needed to take on a more vocal leadership role.

Schickel and Godlevske talked about stepping outside her comfort zone to improve as a vocal presence both on and off the court.

“It’s something that her and I have had lots of conversations about,” Godlevske said. “Becoming more vocal, learning to be a vocal leader. Her actually taking that and [working] to apply it with our team just speaks to the type of person she is.”

You will hear a player calling for the ball down in the post, constantly encouraging her teammates and alerting them to open players.

Talk to Schickel after the game and she’ll be quick to credit the team above herself, something she did even after reaching a major individual milestone.

“[After] her 1,000th point, I told her congrats and everything, and she was like, ‘Yeah, well without you guys, this wouldn’t even happen,” Buck said.

Schickel acknowledges her growth as a vocal leader is still a work in progress, but her teammates said they’ve seen a drastic change over the last few seasons. She has grown to be the go-between between the coaches and players.

“She’ll talk to them, then come back to us,” Weaver said. “She’ll make sure everything’s good between all the girls. [It’s] a really good balance to have.”

In a season with three new assistant coaches, the players placing their trust in Schickel to communicate with the coaching staff is certainly no small matter.

“Her being vocal on the court really helps us a lot,” Buck said. “Communication is key. So to have her as an anchor in the paint, she can see everything and kind of tell everyone what’s going on.”

Schickel believes that being on the team and working to improve herself as a more vocal leader has helped her in many ways outside of basketball.

“I think it’s brought me to be more confident in myself,” she said. “I’m more the quiet person, I don’t have that loud personality. But taking on that leadership role has made me that. I’m not afraid to talk in public anymore. I’m knowing that on the court I can do these things, so it’s easier off the court when I just have to talk to people.”

While basketball has helped increase Schickel’s confidence off the court, her teammates and coaches rely on her as a steady presence.

“Off the floor, she’s one of those people that [players] naturally gravitate to,” Godlevske said. “She’s turned into that calming influence on our team that [makes us think], ‘We’ve got Tori, everything’s going to be alright.’”