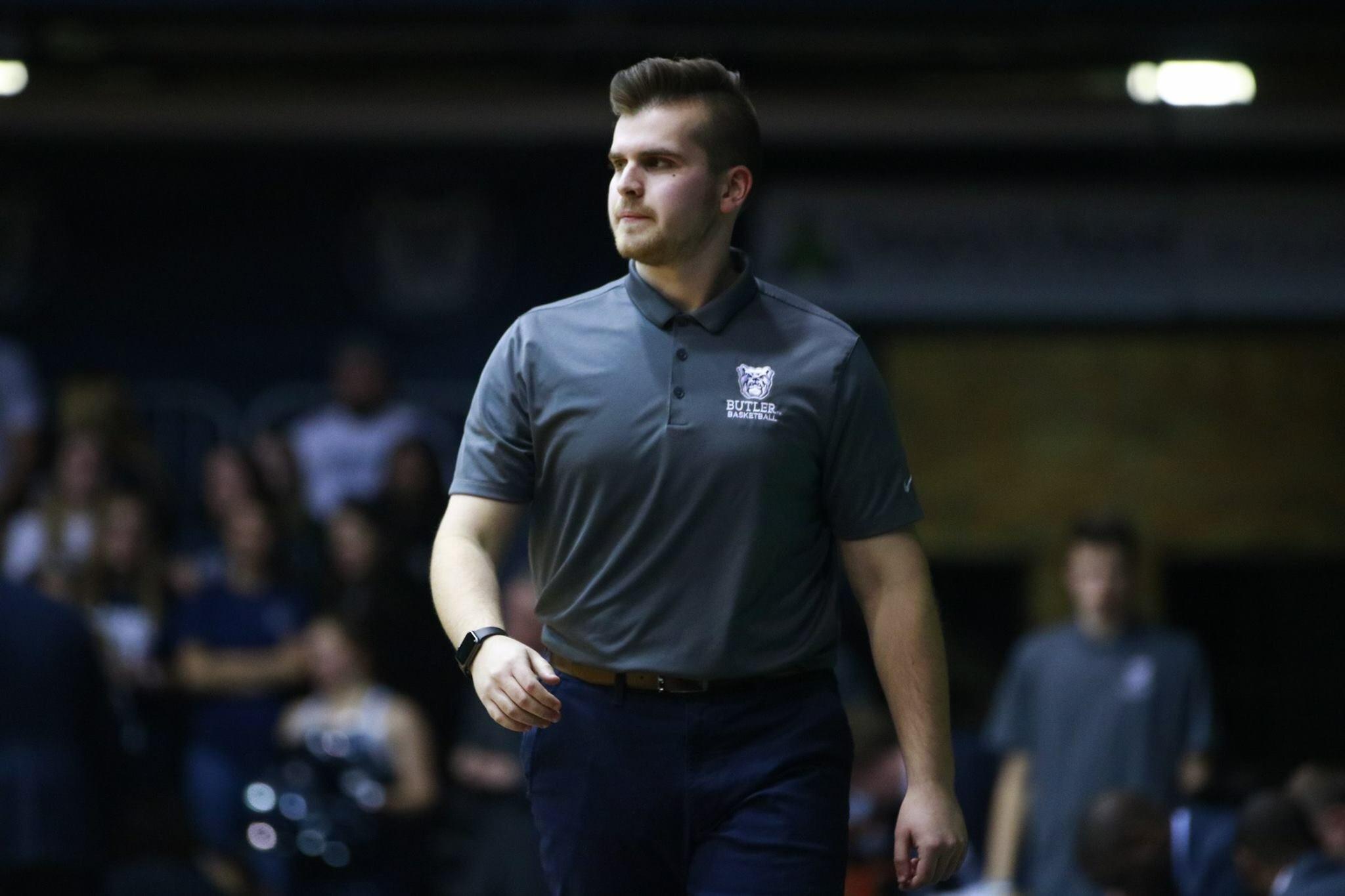 Need a rebounder at 11 p.m.? Perry Waggoner, sophomore men’s basketball manager, is there while Kelan Martin puts up some extra shots. Kamar Baldwin takes a spill in the middle of a game? Waggoner is there. Need to take a look at every shot Marquette’s Markus Howard took in his previous game? Don’t worry, Perry has already cut film for that exact purpose.

All of these instances accumulate to more than 16 hours per week. If Butler men’s basketball is in action, so is Waggoner.

On practice days, Waggoner and the other 11 Butler men’s basketball managers are inside Hinkle Fieldhouse an hour before setting out all the equipment. Baskets for extra shooting, pads for drills, clocks and film. One manager wanders down to the Hinkle basement and uses a giant flyswatter to stir up gallons of Gatorade.

The players may not see it happen, but the managers have the place ready to go before anyone hits the floor.

When the players begin practice, the managers are in the middle of all the action. Waggoner finds himself inside the drills as a passer, rebounder or participant. Other times he’s filming practice from the top of Hinkle Fieldhouse, and going back and forth from the locker room.

Waggoner also said that the coaching staff likes the managers to be a source of energy during practice.

“It’s hard work. But it’s fun enough and it’s important enough to me that it’s worth it,” Waggoner said.

Waggoner said he became a manager for the same reason he came to Butler: the basketball team. He remembered watching Gordon Hayward almost make that famous half-court heave against Duke, and he remembers the magic of Hinkle Fieldhouse the first time he stepped inside.

“If I’m gonna come this far away,” Waggoner said. “I gotta make it worthwhile. [Men’s basketball] is, if not the most important, one of the most important and exciting things on campus that you can be involved in, so I thought I’d give it a shot.”

Over Thanksgiving, Waggoner attended the PK80 game against Texas as a fan. The team gave he and his family, who are from Portland, tickets to the game. He wasn’t one of the two managers originally invited to Portland with the team.

But when there is too much happening for those managers to handle, sometimes the team needs to call in a manager from the sixth row behind the Butler bench sitting with his family. Waggoner was summoned from the stands to accompany the team.

Waggoner was on the bench for the Ohio State game two days later, where he witnessed a 15-point comeback with under four minutes to play. Waggoner said being a part of that comeback and experiencing the celebration in the locker room was incredible.

Game days like that are just as busy for Waggoner and the managers as practices.

In the gym hours before tipoff, Waggoner makes his way down to set up the visiting team’s locker room. Waggoner lays out stretching mats, heating pads and coolers of Gatorade. Then it’s more rebounding, water and towels.

He could also be in the film room during a game. Waggoner said it is not a job he particularly likes, but the job is important. One manager every game is tasked with watching the game from the film room cutting up components of the game, such as defensive stops or successful offensive possessions for tomorrow’s film session.

“The most fun times are when I can listen in on the huddle and when you can hear players talk through the issues of the game,” he said. “It gives me a different perspective.”

Waggoner hears coach Jordan and assistant coach Meyer barking out instructions in the huddle, and he hears locker room chatter about what needs to be fixed and what is going well.

It’s a joke as old as the position itself. Team manager? Well then, you are not really part of the team; you just work for them. Waggoner would have to respectfully disagree with that claim.

“If they said that, they’ve clearly never been a manager, a player or a coach,” Waggoner said. “They just don’t understand. But if they stepped into our shoes for one day, they would realize how important we are to the team and how important the job is in general.”