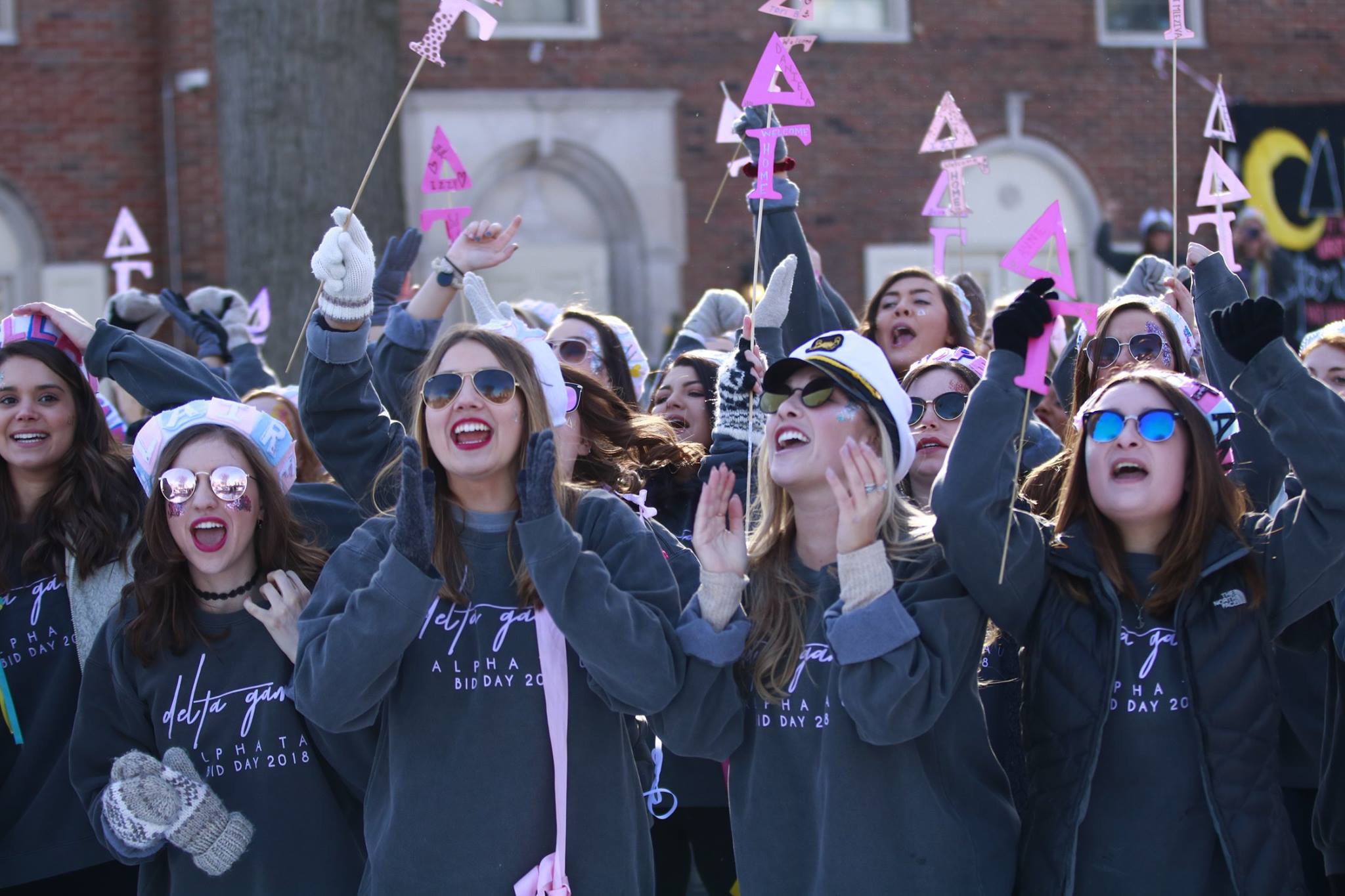 Members of Delta Gamma on the front lawn of their house awaiting their new members. Photo by Jimmy Lafakis.

After a record setting number of students joined Greek houses in 2017, this year’s recruitment saw fewer new members, falling closer to the 2016 numbers.

Director of Greek Life, Becky Druetzler, is one of the people who coordinates recruitment and deals with the behind-the-scenes action. She described this year’s recruitment as a very interesting thing to watch unfold.

“Our numbers were consistent,” Druetzler said. “They weren’t entirely identical, but they were very close to two years ago.”

Julia Bartusek, a sophomore peace and conflict studies and human communication and organizational leadership major, is a student ambassador on campus and a member of Alpha Chi Omega. Bartusek was a recruiter this year, after going through the process last year.

“My favorite part of being on recruitment on this side was getting a feel for how their week was going and just being able to talk about that,” Bartusek said. “I would just talk to someone during recruitment and go in wanting to be a happy moment of their day because I know it can be a lot.”

Bartusek felt she could help out students because she had been in their situation the previous year.

“I’m a huge extrovert, so I really enjoyed it,” Bartusek said.

As a student ambassador on campus, she informs prospective students about various things on campus, including Greek Life.

“I am guided to say that it is prominent on campus, but not dominant,” Bartusek said. “I tell them that if they want to go through Greek Life, that’s great. It’s a great community and it’s somewhere that I found community and I absolutely love it, but if you don’t want to do that, I know people and I’m friends with people who don’t choose to do that.”

Haylie Moehlenkamp, first-year chemistry and psychology pre-med major, was excited to go through recruitment and was even more excited to accept a bid from Kappa Kappa Gamma.

“I only have two younger brothers at home and I love them to death, but I always wanted a sister,” Moehlenkamp said. “As cheesy as it sounds, I did want that sister-sister bond and that was one of my major reasons going through.”

Moehlenkamp said she was not the most outgoing person, but recruitment was healthy for her growth as a person.

“I wanted to break out of my shell and meet a bunch of incredibly strong and empowered women who were going to lift me up and bring out the best in me and challenge me and who would support me and be there no matter what,” Moehlenkamp said.

Sam Williams, first-year exploratory business major, had similar reasons for why he wanted to join a fraternity and eventually accepted a bid for Phi Delta Theta.

“Originally I didn’t really want to [go through recruitment] coming in my freshman year, but then I realized I could get a group of really good friends that could last forever,” Williams said.

He also mentioned how there could be some future benefits to being part of a fraternity.

“It’s really good for resumes,” Williams said. “If you ever go to a company and someone was in the same fraternity or even went to the same school, it’s even more personal.”

Some students did not participate in recruitment this year because it did not interest them or it may not have been the right time for them.

Brad Parisi, first-year history and education major, had different ideas about how he wanted to spend his time.

“I didn’t want to go through that whole stressful process and have to be on campus early,” Parisi said.

Parisi was unsure whether he was going to be at Butler this semester or not so he decided to not participate during recruitment.

“After I decided on staying, I just wanted to spend three, four more days with my family and then try next year instead of this year,” Parisi said.

Butler’s Greek Life has many options available to students. The National Panhellenic Conference Sororities on campus were started in 1874, and, today, there are seven different houses for female students. There are five fraternities on campus, and representatives from each fraternity make up the Interfraternity Council. It is also an option to join three of the nine National Pan-Hellenic Council Greek organizations on Butler’s campus.

Overall greek membership decreased in 2016 for the first time since 2007, according to the Butler University Fact Book.