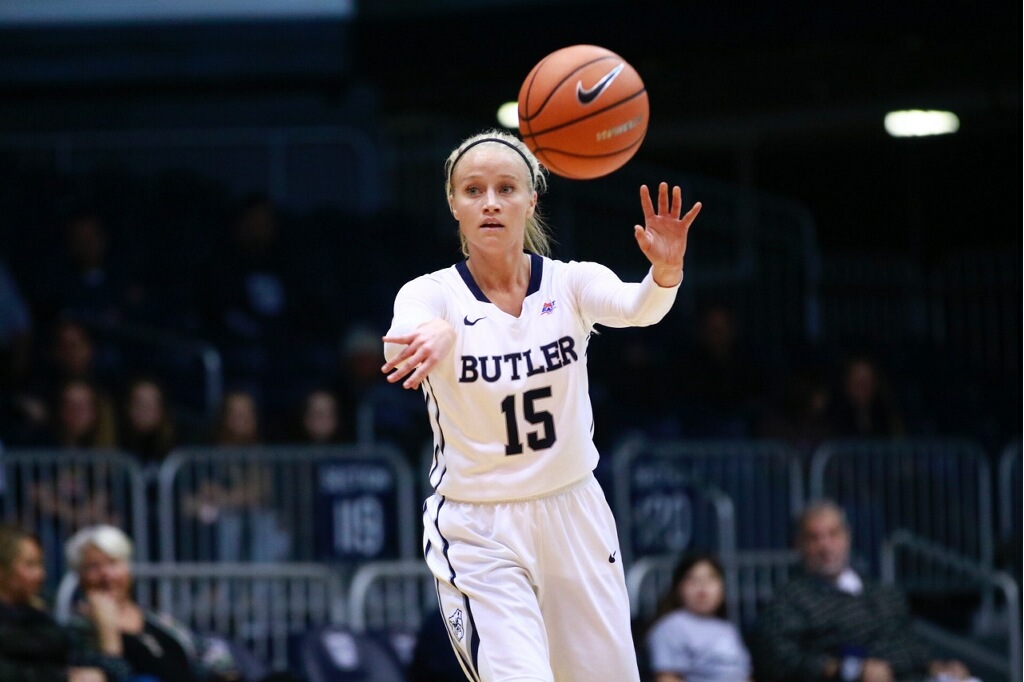 Whitney Jennings passes the ball to a teammate. Jennings led the Bulldogs with 17 points. Photo courtesy of Jimmy Lafakis.

The Butler University women’s basketball team snapped a three-game losing streak with a 59-53 win over Creighton University at Hinkle Fieldhouse on Jan. 19. The Bulldogs improved to 4-4 in Big East play and 12-8 on the season with the victory.

Butler got off to a strong start to the game, outscoring Creighton 14-3 in the first five minutes and 22-9 in the first quarter. That impressive start would prove to be crucial for the team, as the Bluejays would go on to outscore the Bulldogs in each of the final three quarters.

Dawgs off to a quick start leading the Bluejays 10-3 with 7:01 to play in the first quarter. pic.twitter.com/RI9f6LJCpP

After jumping out to a 21-point lead midway through the second quarter, Butler’s scoring pace slowed leading into halftime, and Creighton ended up outscoring the Bulldogs 18-16 in the quarter. A 7-0 scoring run from Creighton to begin the second half brought Butler’s lead down to four points, but the Bulldogs were able to respond and take a nine-point lead into the final ten minutes.

Although the Bluejays were able to outscore the Bulldogs again in the fourth quarter, 14-11, Butler was able to hold onto the lead and pick up the victory.

Sophomore forward Shae Brey, who led Butler with a game-high 12 rebounds, said that the team worked hard to be aggressive from the start of the game.

“We just talked about that in the locker room, just making sure to share the ball and push the tempo to get a big lead in the beginning,” Brey said. “I thought we did a really good job and we had some big shots that were knocked down early on.”

Despite the strong start, redshirt junior guard Whitney Jennings said the team knew they had to keep pushing to hold off the Bluejays.

“Creighton’s a great team, so we knew they were going [try to] make a comeback so we just [had] to resist that,” Jennings said. “When they were starting to make that comeback, we just [had to] up the intensity a little bit.”

The Bulldogs will have just one day off before returning to action Sunday, Jan. 21 at home against Providence College.