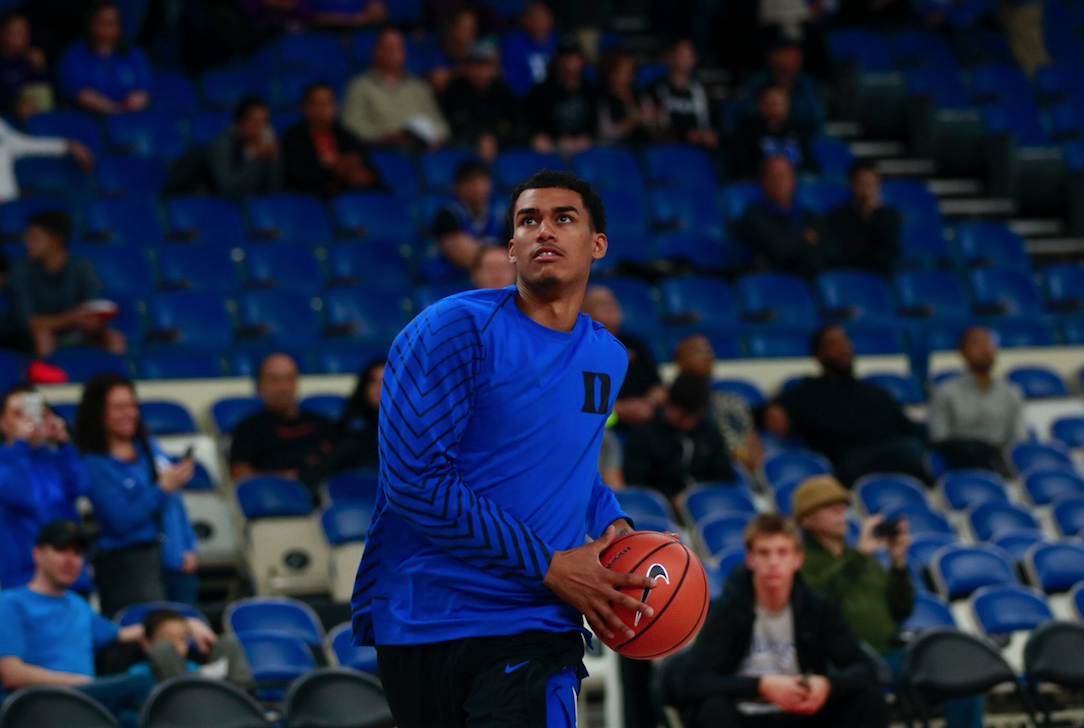 Jordan Tucker warms up during the Phil Knight Invitational. Photo by Jimmy Lafakis.

“They presented an opportunity for me to play right away and fill in a void for next year,” Tucker told the Charlotte News and Observer. “To go there and earn a spot. Everything they presented to me about how they play, is what happened in the game.”

Ranked 40th nationally by ESPN as part of the 2017 recruiting class, Tucker was in Hinkle Fieldhouse during the Butler-Marquette game on an official visit. The New York native was expected to make a decision between Butler and Georgetown, according to ESPN’s Jeff Borzello.

Duke transfer Jordan Tucker tells ESPN he will announce his next school on Monday. He’s deciding between Georgetown and Butler.

Duke announced Tucker’s decision to transfer on Dec. 31 in a press release.

“It was pretty simple for me,” Tucker, 6-foot-7, told the Charlotte News and Observer. “I just needed playing time. I just needed to play at the end of the day. And Coach [Krzyzewski] understands it. It was a mutual agreement.”

Coming in as part of the No. 1 recruiting class according to ESPN, Tucker appeared in just two games for the Blue Devils, playing 14 total minutes and scoring six points.

The four-star prospect averaged 17.8 points per game as a junior at Archbishop Stepinac High School in New York. He played his senior season at Wheeler High School after the family moved to Georgia.

The small forward could be eligible to play in the second semester of next season as a sophomore.

Paul Jorgensen, a redshirt junior from George Washington, is currently averaging 12 points per game for Butler.