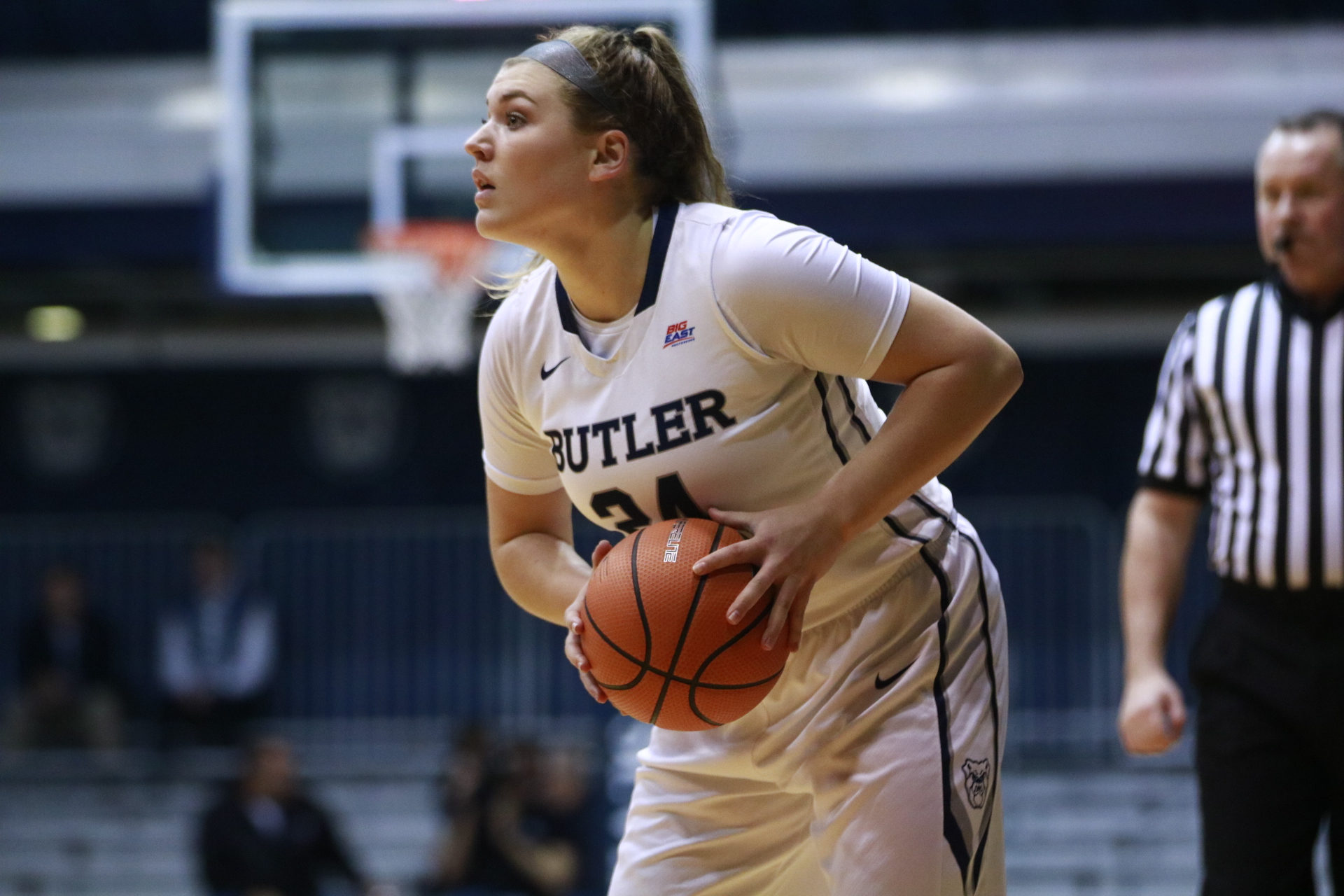 Kristen Spolyar surveys the court against Wisconsin. Spolyar added 14 points and nine rebounds off the bench for the Bulldogs. Photo courtesy of Jimmy Lafakis.

The Butler University women’s basketball team improved to 3-0 at home and 6-4 on the season with a 69-62 win over the University of Wisconsin at Hinkle Fieldhouse on Dec. 8.

Butler got off to a strong start with an 11-0 scoring run to begin the game. Shooting 64 percent from the field in the first ten minutes of play, the Bulldogs would finish the first quarter with a 20-12 lead over the Badgers. Wisconsin outscored Butler by one point the rest of the way, but the first quarter surge was enough to lead the Bulldogs to the victory.

Wisconsin did shrink Butler’s lead in the fourth quarter, with three consecutive Badgers 3-pointers bringing the Bulldogs’ advantage down to one point. But sophomore guard Kristen Spolyar followed up a layup from junior center Tori Schickel with eight straight points, including two three-pointers, to push Butler’s lead back to seven.

Even with Wisconsin pushing for a comeback late in the game, head coach Kurt Godlevske said he had confidence in his team.

“I thought we played fearless all night,” Godlevske said. “I wasn’t nervous about us being able to score and I think that’s probably the biggest thing.”

Spolyar, who’s third on the team in points this season, said she’s embracing her role coming off the bench.

“Coming off the bench, I think it’s my job to bring that energy to the game,” Spolyar said. “I think if I [provide] a spark off the bench that really helps the team. [In the fourth quarter] I think they were looking for us to hit some big outside shots, and that’s just what I had to do.”

Kristen Spolyar coming up huge in the final minutes of this one. BU leads Wisconsin 66-57 with less than two to go

Spolyar, who finished with 14 points and nine rebounds, was one of five Butler players who contributed nine or more points in the contest. Schickel picked up her fifth double-double in the last six games with a team-high 19 points and 10 rebounds.

Schickel said that getting contributions from throughout the roster has been key for the team in recent games.

“That’s why we’re playing so well,” Schickel said. “We’re moving the ball and sharing the ball so well. Everybody’s stepping up and hitting shots in their moment. Everybody just knows their role so well.”

For the game, Butler outshot Wisconsin 42 to 38 percent from the field, while both teams converted eight of 25 shots from beyond the arc. Butler outrebounded Wisconsin 39-37 while also largely keeping the Badgers off the free throw line (four points).

The Bulldogs will have ten days to prepare for their next matchup at home against Loyola University on Dec. 18.