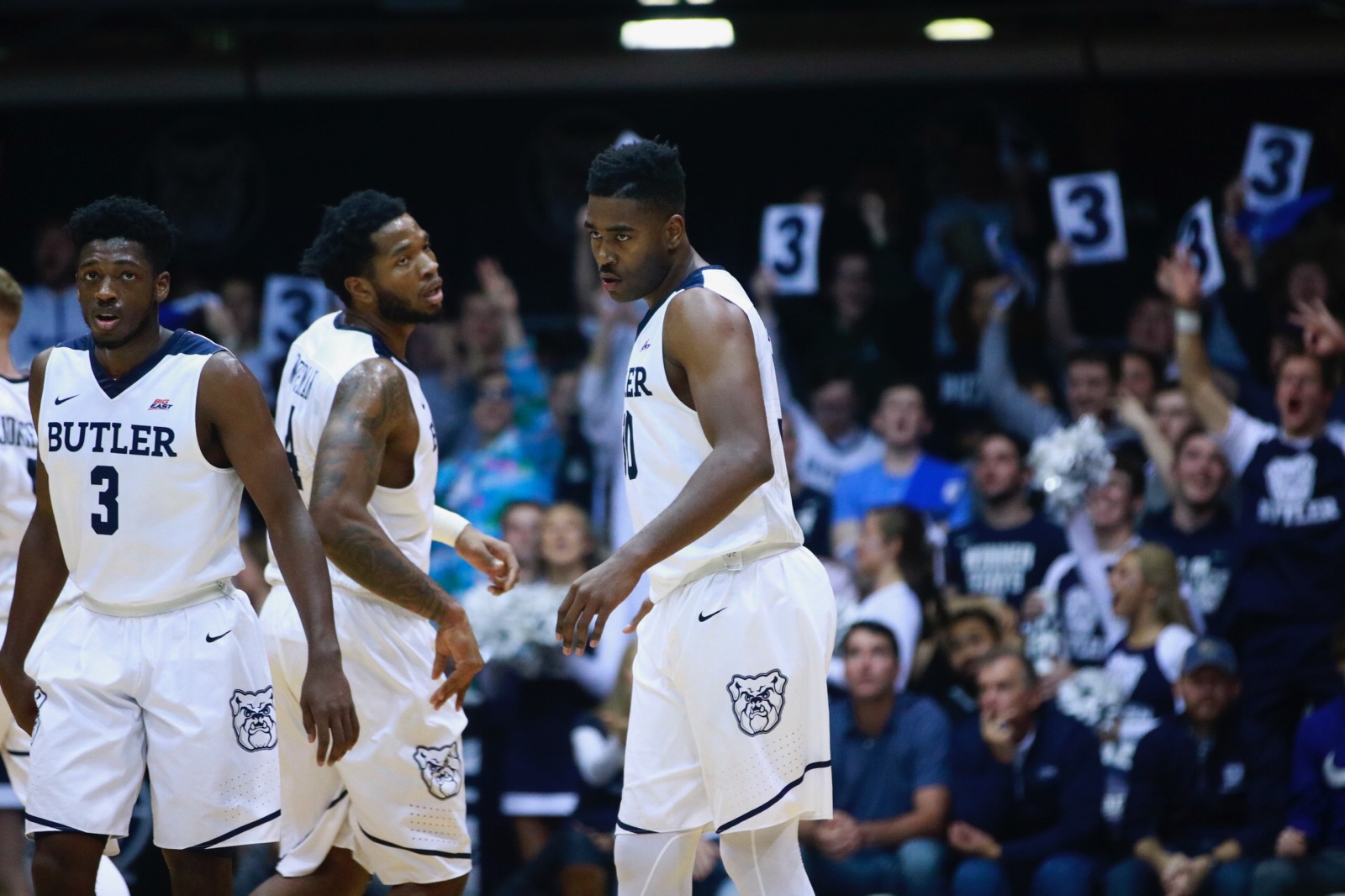 Kamar Baldwin, Tyler Wideman, and Kelan Martin during the Utah game. The trio combined for 58 of the team’s 81 points. Photo courtesy of Jimmy Lafakis.

The Butler men’s basketball team followed their resounding win over Saint Louis with another solid win against a previously 6-1 Utah team. Now winners of four straight, Butler is playing its best basketball of the season and showing clear improvement. Here are three takeaways.

Martin picked up right where he left off against Saint Louis in this game. He dropped 14 points in the first half, making five of his 11 field goal attempts in the process. Then, Martin caught fire in the second half, adding 15 more points and knocking down seven of his eight shots. He showed his full offensive potential in this game, finishing with 29 points on 63 percent shooting and added 11 rebounds as well.

The better and smarter that Martin plays, the better Butler is. In his last two games, Martin has scored 49 points. Even more importantly, he did so while making 19 of the 31 shots he took in those two contests. If Martin can continue to score at an efficient rate, the potential of this Butler team is exponentially higher. A beast may have been unleashed.

2. The 3-point line is still an issue defensively, but a bright spot appeared offensively.

The Utes got off to a blistering start from beyond the arc, nailing three of their first four 3-pointers. They finished the game shooting 44 percent from deep, well above their season average of 33 percent. It seems that the Saint Louis game was an aberration and the Bulldogs still have plenty of work to do on their perimeter defense. They played well enough in other areas to compensate in this game, but it will come back to hurt them at some point if it doesn’t improve.

On a more positive note, Paul Jorgensen had his best game in a Butler uniform, chipping in 16 points, four assists, and three rebounds. Twelve of his 16 points were courtesy of the longball, thanks to connecting on four of his six triples. For a team struggling from three and with its best 3-point shooter injured in Sean McDermott, the emergence of Jorgensen as a threat from deep and as a scorer overall is great news.

Utah is currently 60th in the kenpom rankings and 39th in RPI, both higher than any opponent Butler has beaten so far this season. Of all the Bulldog’s previous wins, only Ohio State is in the top 100 of the kenpom rankings. Butler still has a game with Purdue on Dec. 16, but other than that, this was their final chance to get a signature win before Big East play starts. With this victory, the Bulldogs’ nonconference resume looks a whole lot stronger, regardless of what happens against the Boilermakers.

Butler now boasts wins over four teams in the RPI top 100 teams and two in the kenpom top 60. Combine that with a solid showing in conference play and Butler will have a very strong case to be included in the field of 68. There’s obviously still a long way to go, but the Bulldogs have put themselves in a great position to be dancing in March.