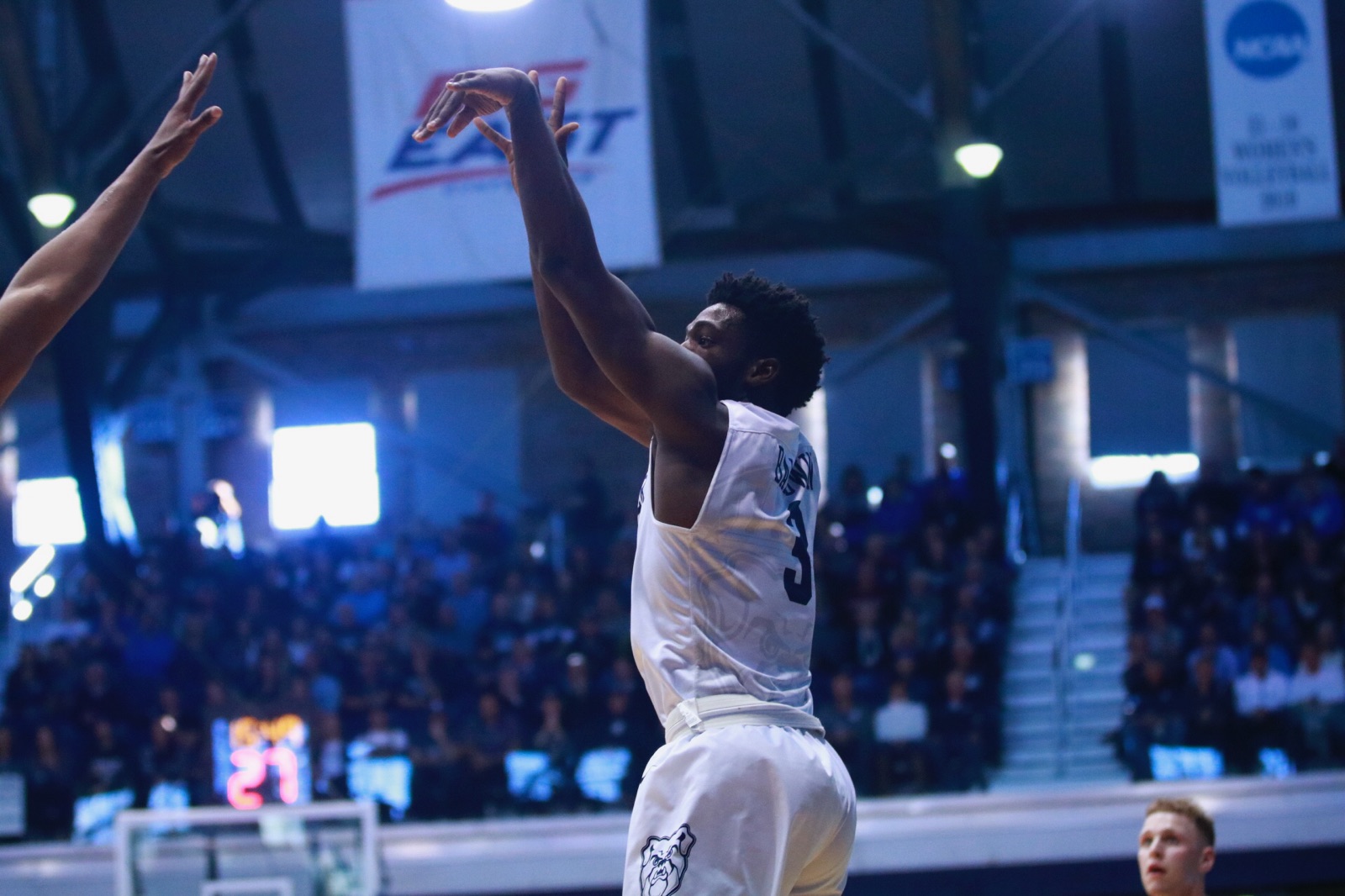 Kamar Baldwin flicks his wrist on the follow-through of his shot. Baldwin scored 14 points in Butler’s win against Saint Louis on Dec. 2.

Still hot from the overtime win against Ohio State to wrap up Phil Knight Invitational 2-1, the scoring spree continued in Hinkle Fieldhouse on Dec. 2. Riding on one of their best offensive performances of the season, the Butler men’s basketball team shot their way past Saint Louis, 75-45. Butler is now 6-2 this season.

A look at the numbers from the first half.. pic.twitter.com/rgzR1So2Nn

Ten Bulldogs scored in the winning effort, shooting 53 percent from the field. Good things came in threes, and despite missing their best distance shooter Sean McDermott to an ankle sprain, the  3-pointers hailed down from the arc. Kelan Martin scored the first 3-pointer, followed by two consecutive threes from Paul Jorgenson. Martin tallied a game-high 20 points plus 12 rebounds for his second double-double of the season.

“We had a good pace, we had open shots and continued to take them throughout the whole game,” Martin said. “That led to scoring.”

With the absence of McDermott, head coach LaVall Jordan opted to start the combination of Martin, Jorgensen, Tyler Wideman, Aaron Thompson and Kamar Baldwin for the first time this season. Sent to replace McDermott, Jorgensen scored 14 points, good for second on the team. Until recently, Jorgensen’s role was limited to coming off the bench.

It was a miserable game for Saint Louis, a team who entered with a three-game losing streak, and was limited to just 13 points in the first half. Saint Louis was scoreless for the first four minutes of play before breaking up the scoring drought with a pair of free throws. Collectively, the Billikens shot just 19 percent from the field in the first half, and 29 percent on the game.

Butler took advantage, garnering their largest lead of the season with a 40-point difference. Twenty-five points came off turnovers. Off the bench, the Bulldogs outscored the Billikens 20-4.

“First half, I was really proud,” Jordan said. “The ball was moving, and guys were seeing the opportunities that we had, just seeing the game and slowing ourselves down.”

Lack of offensive movement was a key hindrance to the Bulldogs in Portland, where they shot 39 percent from the field and tallied just 48 points in a loss to Texas. Earlier in the week Jorgenson emphasized the team’s potential to shoot, and it came through against Saint Louis. Passing was also highlighted in practices following the tournament.

“Offensively, keep moving the pace, not dribbling the ball right away when you catch it, setting up our best players,” Kamar Baldwin said. “That showed today.”

:ed by Thompson with five assists, Butler recorded 11 assists in the first half alone, eight shy of their season game-high.

Butler looks to carry momentum against Utah on Dec. 5. Tip-off is slated for 9 p.m.