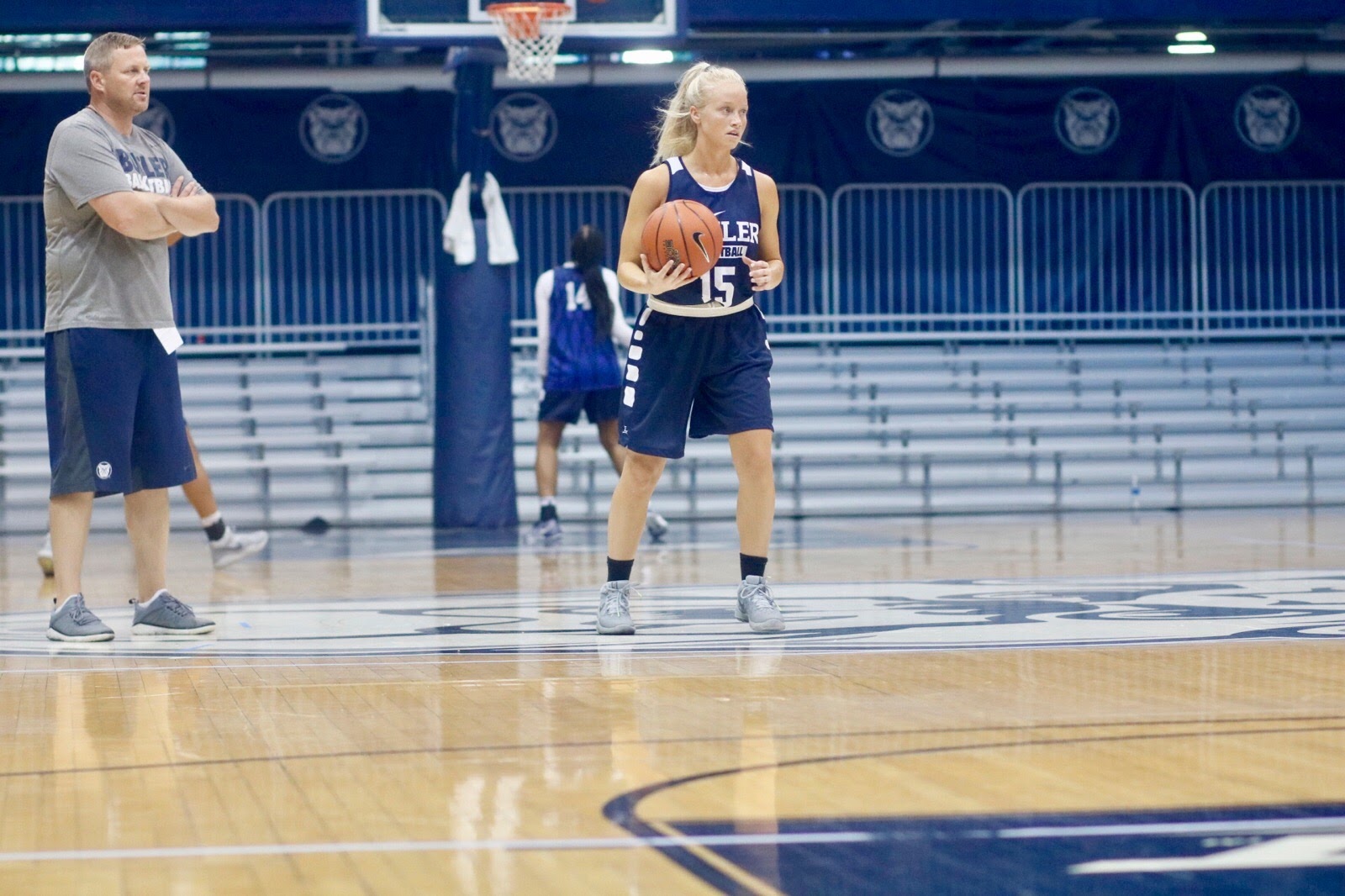 After the 2013-2014 high school basketball season concluded for the Logansport Berries girls basketball team, an Indiana Miss basketball needed to be crowned; an accolade star point guard Whitney Jennings had yearned for since she was a kid and worked for throughout high school.

It was an accolade every kid playing basketball in Indiana dreamed of, the same one Jennings started thinking about the moment she saw former Indiana Miss Basketball Courtney Moses and Shanna Zolman play.

“I remember thinking, I want to win that one day,” Jennings, now a redshirt junior, said. “As I progressed to high school it got to the point where I was like, ‘Oh, this is a real possibility.’”

She won. She won undisputedly, receiving 80 more votes than the next closest contender.

Her dad, Doug, played for Indiana Central, now known as University of Indianapolis. Her mom, Carol, played basketball in high school. Her older siblings Shannon, Rachel and Jared all played for the Berries.

Jennings’ family, particularly her younger brother, Matt, played a major role in her basketball journey. Growing up, the two would work out together and often play one-on-one. That is until Matt grew big enough to where Whitney couldn’t beat him anymore.

“Once that happened, it was like, ‘We gotta cut these one-on-one games off, I don’t want to lose to my little brother,” Jennings said.

Three years apart, Whitney and Matt are each other’s biggest supporters. They’re constantly critiquing each other’s games — things they did well and areas of improvement — while trying to better each other.

Matt is currently a freshman at Grace College in Winona Lake, Indiana, and a member of their basketball team.

“He’s been the person I talk to the most and go to for advice,” she said.

The advice and critiques paid off.

Jennings finished her high school career with 2,641 points, good for fifth all-time in state history at the time. She averaged 32 points as a senior at Logansport, which etched her name as the school’s all-time leading scorer.

Jennings’ stats and achievements separated her from most prospects, making her a highly coveted recruit in the eyes of Butler, Ball State, Iowa, Indiana and Purdue.

It’s no coincidence all schools were in the midwest. Jennings wanted to be close to home. Ironically, she chose the school farthest away and became an Iowa Hawkeye after they heavily recruited her.

Jennings secured a starting job her freshman year and helped lead the Hawkeyes to their first Sweet 16 appearance since 1996.

Jennings played another year, but the distance was starting to take a toll on her. Iowa was nearly six hours away from home, and Jennings began to miss what she loved the most.

“My family is very important to me, and I wanted to get back closer to home and I wanted to be able to see my siblings more and my brother’s games,” Jennings said. “Ultimately, that was the driving force behind all that.”

Butler’s head coach Kurt Godlevske reached out to Jennings once she decided to leave Iowa.

“I knew I wanted to come back to Indiana,” she said. “Butler was a school that I loved. My mom went to the school here. I was very familiar with the school.”

The team was young, giving Jennings the opportunity to lead and more importantly, campus was an hour away from Logansport.

There was a catch. Because of NCAA transfer rules, she would have to redshirt her junior year. She could practice, but it would be a year before she could compete in games.

Jennings may not have been playing, but she didn’t waste time impressing Godlevske.

“I remember one practice last year she was practicing with the [practice players] and we were doing a longer scrimmage session,” Godlevske said. “I kid you not, she hit 30 threes in that scrimmage. I knew she was good, but seeing her do that in a playing type of format was special.”

But the bench came with one big, glaring negative — watching her new team lose 25 games without her. People from her hometown approached her, ‘Wow,’ they said, ‘This must be really hard for you.”

“It was hard,” Jennings said, “But I could also take a step back and work on my game without all the pressure of the game.”

The break from playing also allowed her to attend most of her brother’s games his senior year with the Berries, something she described as a “blessing.”

As her first year at Butler passed, she managed to make an impact on all the girls with her personality and play on the court, especially sophomore Sydney Shelton.

“Whitney is a super bubbly person,” Shelton said, “It carries over to the court, she’s a great point guard and I love how fast she plays. She facilitates the ball very well and she can score. It’s really hard to guard her because she’s fast, so she can get to the rim.”

It’s been one year, seven months and 22 days since Jennings last played in a collegiate game. That all changes this Saturday as Jennings and the Bulldogs play their first game at Hinkle.

“It’s been a rough couple of years around here,” Jennings said. “I think that everyone is ready for that switch and I’m hoping to be the catalyst to change all that.”