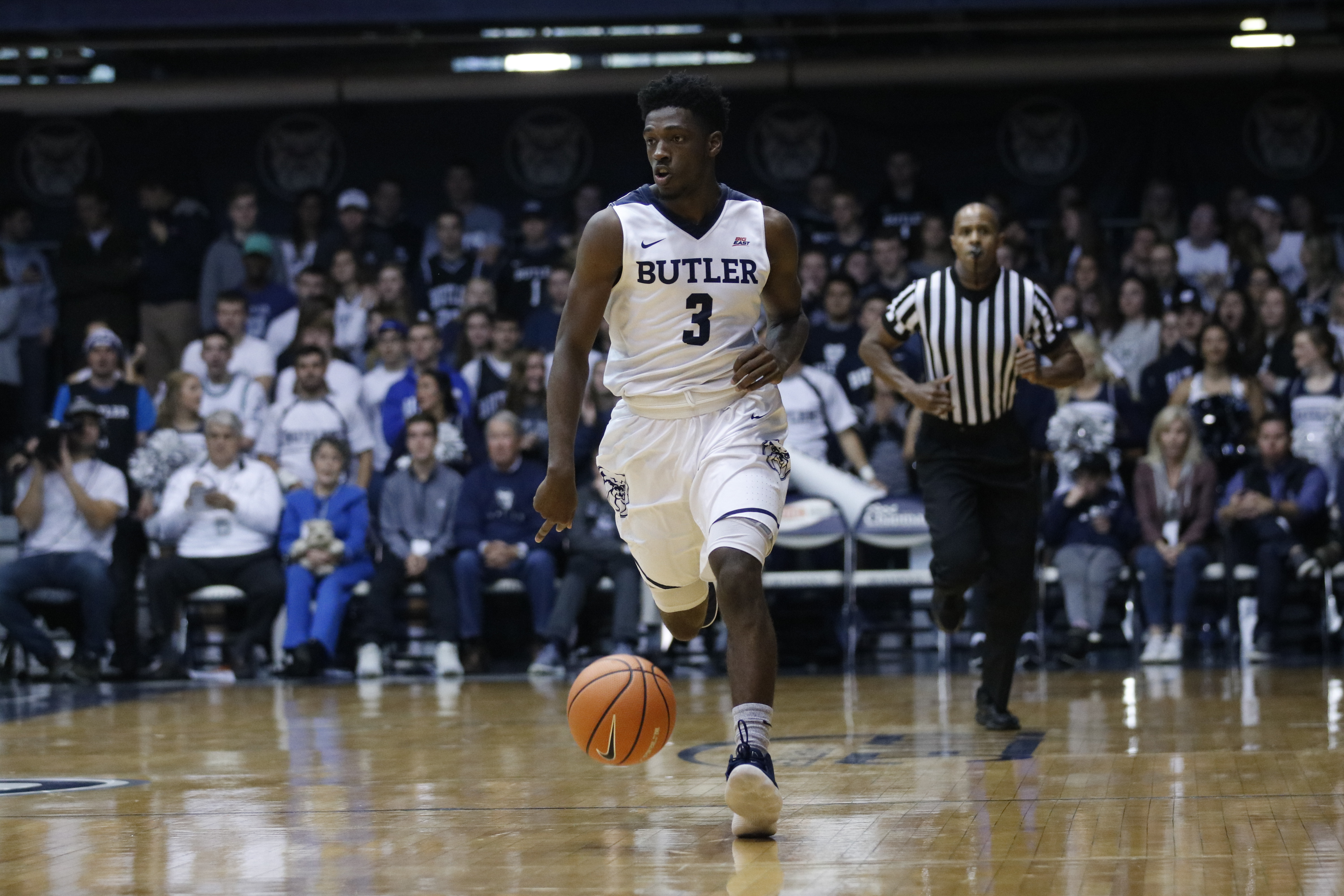 Kamar Baldwin brings the ball up the floor. Photo by Jimmy Lafakis.

Basketball is back in Hinkle Fieldhouse. The Butler University men’s basketball team takes on Kennesaw State University to begin their 2017-2018 season. Here is everything to know before the first game of the season.

Who: Butler vs. Kennesaw State

How to watch/listen: Fox College Sports and 1430 AM

On Nov. 4, the Bulldogs beat Lincoln Memorial 86-79 in a game that was close throughout. The Division II Railsplitters proved to be tough competition and came into Hinkle Fieldhouse with back-to-back Division II Final Four appearances.

Senior forward Kelan Martin went to the free throw line 11 times against Lincoln Memorial and made all 11. Last year, when Martin shot six or more free throws the Bulldogs were 12-0. In the three games Martin failed to go to the charity stripe, Butler went 0-3. For an effective offense, Martin needs to continue to attack the front of the rim instead of settling for long-range jump shots.

Key takeaway from their first two games? The Bulldogs need to work on taking care of the basketball. Butler committed 27 turnovers in the two contests. Opposing defenses will be even better as Butler begins playing Division I teams, and protecting the ball will be crucial.

What did the Dawgs do last season?

The Bulldogs are coming off a 25-9 season, which was good enough for second in the Big East Conference behind Villanova University. The postseason saw Butler advance to the Sweet 16 for the first time since 2011 before running into eventual national champion University of North Carolina. Butler returns two starters, Kamar Baldwin and Tyler Wideman, from last year’s tournament team as well as preseason first team All-Big East selection Kelan Martin.

Butler underwent numerous changes over the summer, and the team is still adjusting after former head coach Chris Holtmann left Butler for Ohio State University. LaVall Jordan, former Butler assistant coach and a guard under current athletic director Barry Collier, was hired three days later. Jordan brings in a new coaching staff after the the previous assistants followed Holtmann to Ohio. Jeff Meyer worked with Jordan at University of Michigan and Omar Lowery was an assistant under Jordan at University of Milwaukee. Jordan also promoted Emerson Kampen, who was the team’s analyst last season.

What to watch for

Tyler Lewis and Kethan Savage took most of the point guard duties last year, and after graduating, they certainly leave question marks regarding the position. Baldwin spent the summer transitioning to point guard, and it is no secret that Jordan has a knack for developing young players at that position. At Michigan, Jordan developed Nik Stauskas, Glenn Robinson III, Tim Hardaway Jr., and Trey Burke. All four players made their way to the NBA.  Transfer Paul Jorgensen will also take some of the point guard duties for the Dawgs along with freshman guard Aaron Thompson. Thompson, the four-star recruit according to ESPN, played 20 minutes in both exhibition games running the offense while on the floor. It will be interesting to see how Jordan will piece together his explosive guards to get the most out of his backcourt.

After last year’s more methodical approach to offense, the Bulldogs are putting an emphasis on transitioning from defense to offense quicker during the offseason. A number of athletic guards and big men that can run the floor might allow the Bulldogs to get up and down the floor faster this season.

Kennesaw State went 14-18 overall and 7-7 in Atlantic Sun Conference play last season. With that being said, the Owls can shoot. Kennesaw State finished second in the country last season, making 41.6 percent of their attempts from beyond the arch. Senior Nick Masterson was second individually in the country and knocked down 54.1 percent of the 3-pointers he took a year ago. This Kennesaw State team shoots a lot and makes a lot. Perimeter defense is a must if the Dawgs want to win their first game of the season.