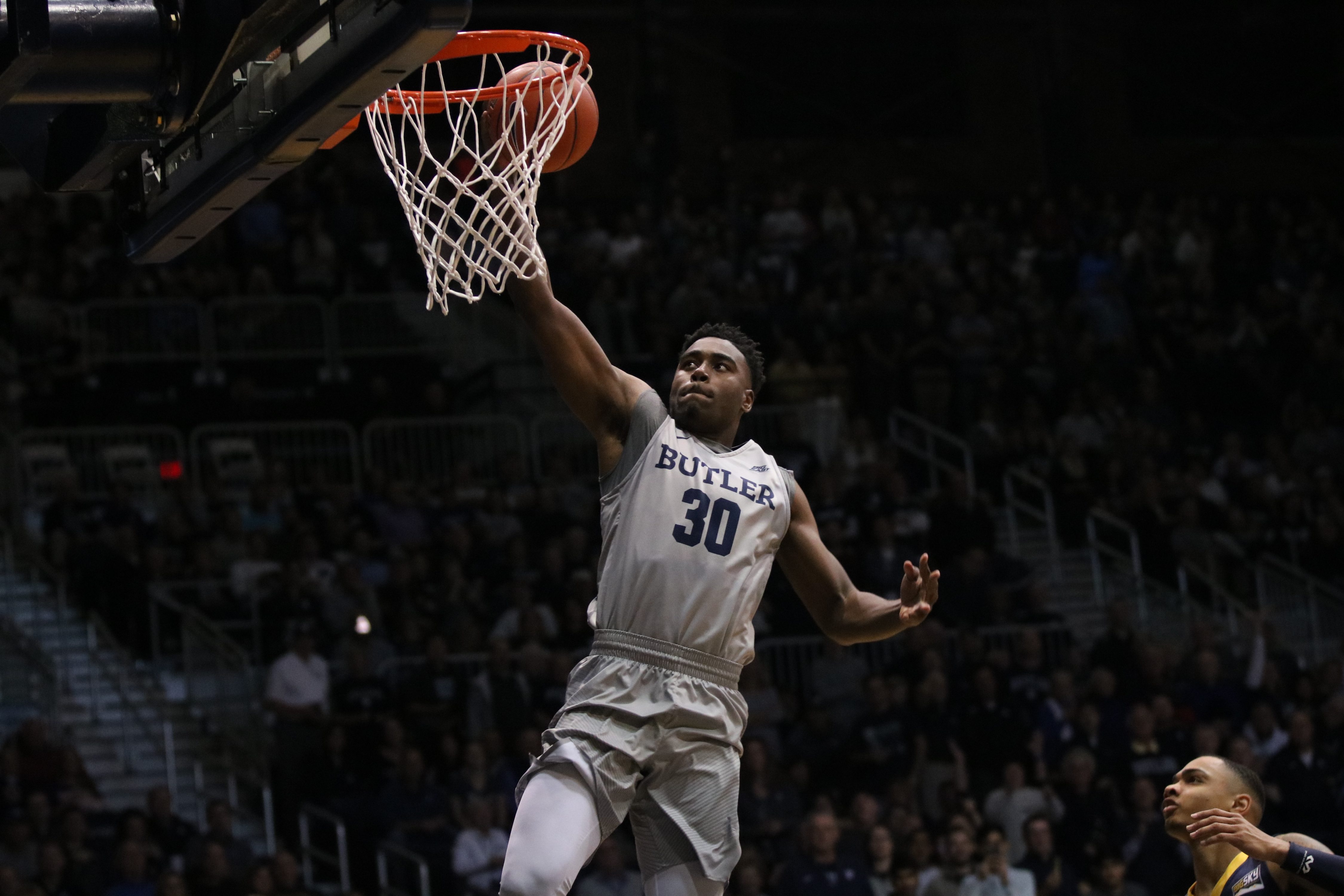 The men’s basketball team graduated six seniors last year and went through a changes this past offseason. Here’s who will be taking the floor for Butler this season.

Martin finished last season as Butler’s leading scorer and rebounder. He averaged 16.1 points per game and nearly six rebounds per contest. He was named to the Preseason All-Big East First Team and was also selected to the 2018 Julius Erving Award Watch List. The annual honor recognizes the top forwards in college men’s basketball. He and forward Tyler Wideman will serve as the only two seniors on the roster. Martin has said he will aim to lead the team by example.

The Bulldogs’ Mr. Consistency has started 66 of the team’s 67 games over the last two seasons. The senior known as “Big Cat” has never missed a game in his career. Last season, he was second on the team in rebounding (5.0) and field goal percentage (.615). His senior leadership will likely become a boon to Butler.

Once upon a time, the George Washington University transfer was known as the “Prince Harry of Harlem” for his playground proficiency in New York. He was a streetball legend, but has since ditched his former nickname and seeks to contribute as a playmaker for the Bulldogs this season. He averaged 15.7 minutes per game during his sophomore campaign at George Washington and practiced with Butler last season.

The big man saw action in all 34 games as a sophomore. Fowler led the team in field goal percentage (.669). He averaged 5.3 points per game, 11.9 minutes per game and started one game against Xavier University. Fowler stepped up to hit some clutch shots last season and the Bulldogs will need his interior presence to help battle against the strong bodies in the Big East.

McDermott showed spurts of productivity during his first year on the court. He averaged 10.7 minutes per game and started one game against the University of Cincinnati. His length, shooting prowess and activity will assist the Bulldogs this season. His nose for the ball and high basketball IQ will help the Bulldogs navigate through the choppy waters of the Big East Conference.

Baldwin burst onto the scene as a freshman last season, scoring 10.1 points per game at at 49.5 percent clip. He also proved himself to be something of a human highlight reel, constantly making clutch plays. The Bulldogs experimented with running Baldwin at the point guard position during their Spain excursion. He will be expected to pour in points and provide tough perimeter defending during his sophomore campaign.

Baddley saw action in 24 games as a freshman. He shot 44 percent from the field and posted a season-high three steals against DePaul University. The lanky wing is active defensively and has shown a penchant to pick pockets.

Brunk played in seven games last year and practiced with the team throughout the season. Butler requested a hardship waiver to have Brunk’s 2016-17 season count as a redshirt season. He posted a season-best 10 points and four rebounds in 18 minutes in the win over Norfolk State University. Brunk slimmed down this offseason and developed more muscle. He endeared himself to Bulldog fans while writing his “Dawg Diary” for the IndyStar during Butler’s Spain trip.

The freshman won 100 games in high school, the most in Paul VI Catholic’s (Virginia) history. He averaged 10.9 points per game as a senior and earned a Washington Post All-Metropolitan first-team selection. Thompson looks to provide strong perimeter defense and astute passing ability. He can tandem with Baldwin to provide suffocating backcourt defense.

As a high school senior, David averaged 11.9 points, 6.3 rebounds and 6.1 assists per game for Vermont Academy. A torn ACL in 2016 hampered some of his high school career, but the Milton, Ontario, native was able to shoot 52 percent from the field during his senior campaign. He has shown ability to shoot with range, and his ceiling is high.

The freshman, who has already drawn comparisons to former Butler standout Roosevelt Jones, played a big role in Calvary Christian’s 2017 5A state title in Florida. He averaged 14.5 points per game during his senior campaign. Gillens-Butler provides a different style of play and the ability to shoot with range.