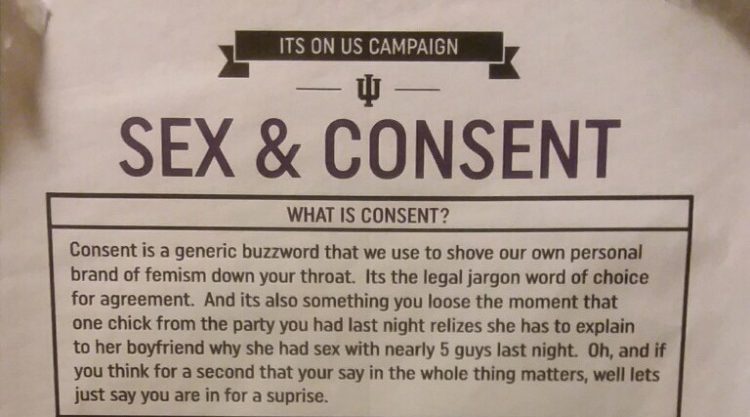 The flyer posted around IU’s campus. Photo courtesy of the Indiana Daily Student.

On Sept. 25, social media sites were abuzz with pictures of flyers posted around Indiana University’s campus which state that women “cry rape” in order to gain sympathy or to get away with cheating on their boyfriends.

The posters were made to look like official handouts from the school’s Office for Sexual Violence Prevention and Victim Advocacy.

The official Indiana University Twitter page tweeted a statement later that day: “We absolutely do not think this is OK. We take this issue very seriously. We are making every effort to investigate and respond.”

Sexual assault is not a joke. IU Police are investigating reports of fake and offensive flyers on campus. Details: https://t.co/Yr5iTeTabV pic.twitter.com/WUQX3jQQ8s

“The fact that people are mocking something that we do have a problem with on campus really undermines everything IU has set in place to prevent these things from happening,” he said.

IU houses many clubs that work to raise awareness about sexual assault and related topics, such as the Culture of Care, whose mission is to reverse the negative climate surrounding claims of rape while challenging students to care for each other.

“I feel like the creation of these fliers raises a good issue, though, which is that people still don’t take this seriously, even though we have so many different programs in place for sexual assault prevention,” Haines said.

IU asks students to take an online course called “My Student Body,” geared towards educating students on drug and alcohol use and sexual assault.

The program must be completed before students move in, and they are then required to take a follow up test at the beginning of October to ensure the information they learned over the summer was retained.

Similarly, Butler requires all incoming, transfer, international and graduate students to complete the online “Think About It” course which provides training on similar topics.

The “Think About It” course was implemented as a mandatory training session four years ago, and every year usually sees a completion rate by around 90 percent of students.

Sara Minor, Butler’s sexual assault awareness advocate, said the course is a great start to give students a baseline knowledge, but it just scratches the surface of what needs to be talked about when it comes to topics of sexual assault.

Despite training programs and prevention measures put into place by colleges and universities, there will always be a select few people that these institutions cannot reach, Haines said.

This lack of communication can have serious implications, especially for those who have experienced sexual assault firsthand.

According to the National Coalition Against Domestic Violence, only 2 to 8 percent of sexual assault accusations turn out to be false.

However, Minor said she “definitely” thinks that victim blaming and anti-sympathetic attitudes towards survivors dissuade the other 92 percent of women who have actually been raped from coming forward.

“It’s always harder to come forward when there are social ramifications around it,” she said. “This poster puts some fault and some stigma on survivors, where they already feel a lot of guilt, so these posters absolutely make it harder for survivors to feel comfortable coming forward.”

Brittan Semler is a junior strategic communication major at Butler and member of Stand Tall/It’s On Us, a club dedicated to raising awareness about sexual assault through round table discussions once a month. She said she believes institutions can never have too many training programs or activities in place.

“Knowledge on these issues is key,” she said. “People need to realize that sexual assault isn’t acceptable.”

After photos of the posters spread, Take A Stand/It’s on Us held a roundtable discussion focusing on what individuals can do to contribute to spreading awareness on sexual assault.

In response to the flyers, Haines said IU students who are part of IU’s Student Association planned a night hike to locate dark or secluded spots on campus in order to install more lighting there to minimize the risk of sexual assault in those areas.

While it is almost impossible to ensure every single student is on the same page regarding issues like these, the actions and mindset of a few do not necessarily have to undermine positive progress that institutions like Butler and IU have made.

Olivia Beeman, first-year international relations major at IU, said it is important to remember that “it’s not specifically an IU thing or an issue within IU, it’s a mindset that varies on a person by person basis.”

Minor said anyone can combat these negative views by taking a stand in their daily lives to talk about how sexual assault is not OK, not just with friends but also with people we might not be totally comfortable with.

“It’s so easy to sit back and stay silent if you’re not a perpetrator of sexual assault or you don’t think you’re part of the problem,” she said.

Fortunately, by having conversations regarding people or ideas that perpetuate sexual assault, we can all help make a difference when it comes to eradicating rape culture.

“It makes me want to do something, like tell people about it and make sure that people know that not everyone is like this,” Beeman said.

Semler shared these views in regards to Butler students, saying it is important to recognize there are people on campus who hold the same views as the creators of the posters, but they are not representative of everyone on campus.

“The whole university is not labeled by these few people within the 38,000 of us,” Beeman said. “Our ideas aren’t theirs.”