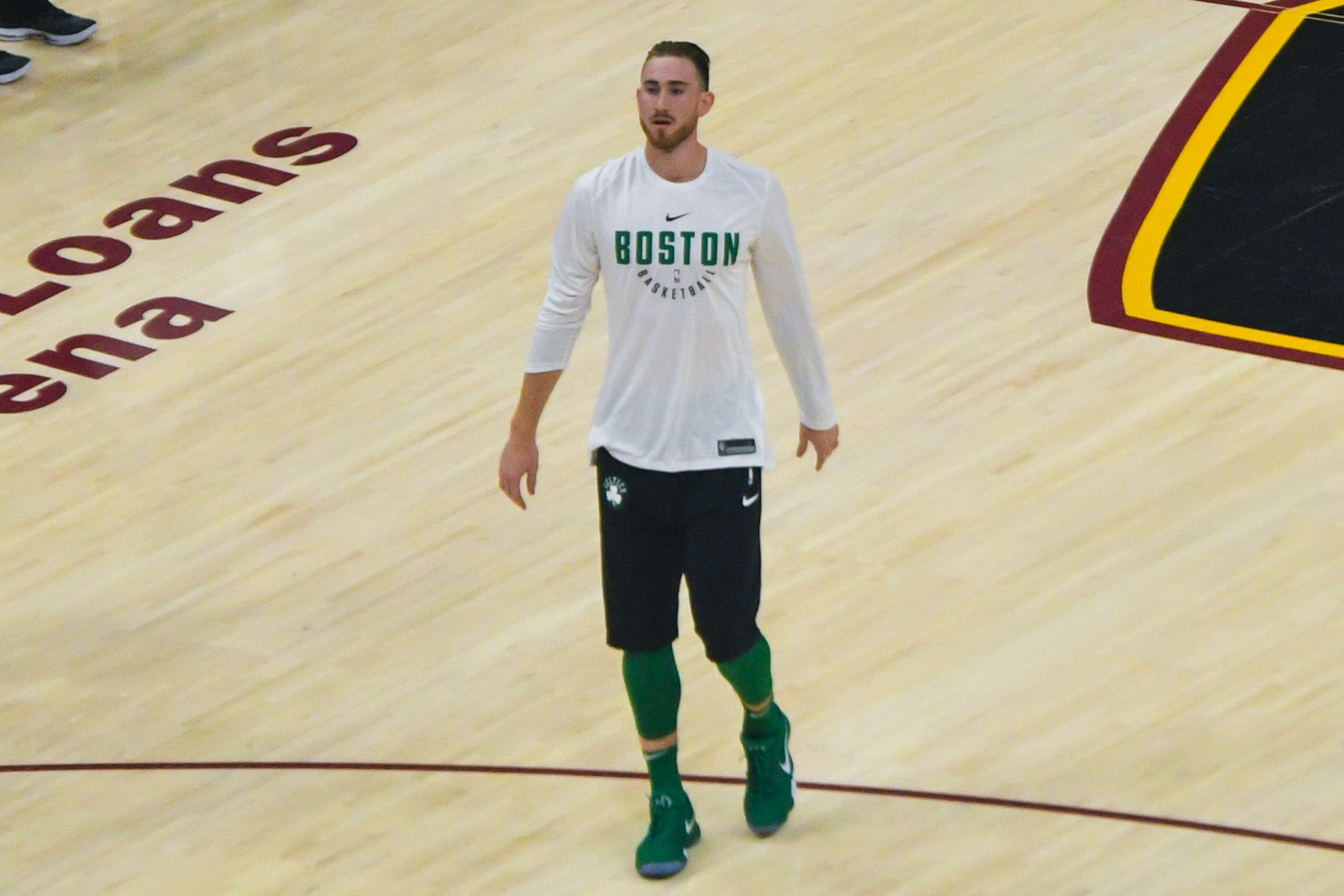 Gordon Heyward warms up before his first game with the Boston Celtics against the Cleveland Cavaliers on Oct. 17. Photo from Wikimedia Commons.

Former Butler star Gordon Hayward took a fall with 6:49 left in the first quarter of his first game with the Boston Celtics. He got bumped by Lebron James going up for an alley-oop and came down awkwardly. Very awkwardly.

The result was a gruesome leg injury that included a fracture of Gordon’s tibia and the dislocation of his ankle.

It resembled Kevin Ware’s injury in the 2013 Elite Eight, and it sent a shiver down your spine like the leg injury Joe Theismann suffered while playing for the Washington Redskins in 1985.

What actually happened to Gordon? What happened to his leg when he went down? And when will he be able to play again? Dr. Ralph Reiff, the executive director of St. Vincent Sports Performance, has the answers to those questions about one of Butler’s basketball legends.

The Butler Collegian: A broken tibia is pretty self-explanatory, but what exactly does an ankle dislocation mean? What exactly is happening to the bones and the muscles that make up the ankle joint?

Reiff: The tibia, obviously the long bone of the lower leg, also extends over the top and creates the roof of the ankle joint. The two bumps on each side of the ankle are actually part of the tibia bone. When you have a dislocation, the ankle joint moves beyond its normal range of motion. To do that, most of the time you have to fracture the tibia for the ankle joint to fully dislocate. The bone typically keeps it from doing that but with extreme force the bone breaks.

TBC: Is a broken tibia and ankle dislocation a “better case scenario” compared to the tearing of tendons and other muscles?

Reiff: When you have an injury, the less disruption to normal anatomy the better the outcome. A dislocation is a significant injury to the joint. The tibia was fractured, and that’s well-documented, but that itself is not a long-term big deal. The bone will heal very well. The other portion that keeps the ankle stable throughout activity is ligaments. Ligaments connect bone to bone, so when you have a significant dislocation, the ligaments have to give way and be disrupted. You’re going to have ligaments that are going to be torn in a dislocation. What is good is that there weren’t muscles that were torn or other major soft tissue in the area.

TBC: How long does it take for a tibia to be back to full strength after a fracture like this?

Reiff: For someone who is of Gordon’s age and health status, it would take six weeks for the tibia to heal well.

Reiff: They are totally different and have different functions. The tibia will heal in a six-week time frame. The bone should heal very normal. The questions yet to be determined in Gordon Hayward’s recovery will be the time table and how well the soft tissue, the ligaments, will heal and get back to working in normal fashion. Translating that to Jeremy Lin, when you have a patellar tendon injury, the soft tissue of the patellar tendon has a tremendous amount of force put on that tendon. They will take totally different paths to recovery, but both should recover very well.

TBC: How does Gordon Hayward’s injury compare to Kevin Ware’s leg injury at the 2013 Elite Eight?

Reiff: The similarity starts and stops with the fact that lots of people saw a very disrupted anatomy. However, the real difference between Kevin and Gordon is where the tibia was fractured. Kevin Ware’s was fractured in the middle of the tibia, halfway between the ankle and the knee. So, there was no joint disruption to the ankle joint or the knee joint. It was a pure bone break. Gordon Hayward’s was lower in the tibia near the ankle and involved the ankle joint while Kevin Ware’s did not involve it at all.

TBC: Do you think it will be difficult to mentally recover from this injury? To jump as high as he can to grab a rebound or dunk for the first time when he is healthy?

Reiff: Gordon Hayward will have a lot of resources at his disposal. I know Gordon has been a student of sports psychology and will have access to the resources for mental support and recovery just as he will for the physical recovery. From a sports psychology standpoint, we see that as putting tools in your tool kit. What do you rely on and how do you manage those things mentally? But that will occur before the public sees Gordon on a basketball court. He’ll surpass those elements the first day he puts his foot back on the ground and when he puts on a normal shoe and get in and out of a car. He’ll have those moments behind the scenes, but when we see him, those issues will be way in the rearview mirror. The real mental challenge is when he is no longer in a controlled environment. When you add another person on the basketball court, now you can’t control all the activity around you, and that’s the final test. Then he’ll have to rely on instinct at that point.

TBC: Realistically, when will Gordon Hayward play another NBA game?

Reiff: From a pure biological standpoint, take all emotions and strategy out of it, he absolutely could have a full recovery physically and mentally before the end of their season. He would be ready if everything goes optimally; no setbacks. That’s the science answer, then you layer in all the reality of physical conditioning, sort of like Andrew Luck. Could Andrew be playing today? No doubt. But all those other facts when you are involved in professional sports, they have to look at the whole big picture and that’s what no one outside of the Boston Celtics will know for a long time.