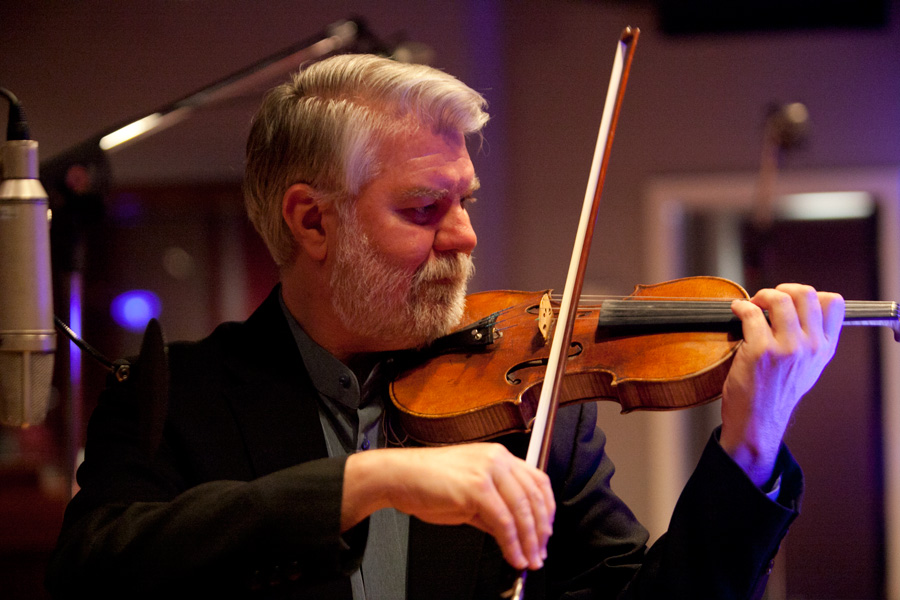 Walking into Eidson-Duckwall Recital Hall on Sept. 26, guests do not expect to find wires, amps and monitors across the stage. 2007 Butler arts-administration theatre major Margaret Henney sat front row at the concert.

“Knowing Butler, I knew this performance was going to be a bit avant garde, but I absolutely loved it,” Henney said.

Professor emeritus of violin Davis Brooks is the fourth performer in the Duckwall Artist Series. For the past 30 years he has only performed contemporary music as a part of his personal repertoire. He made a point to mention that all the music he was performing that evening was written by living composers.

“It’s easier to get answers in life from living composers rather than dead, it’s just easier,” Brooks said.

By the end of the concert, audiences were excited and in awe of both the performer and the music. Richard Clark, a professor of viola and director of Butler Symphony Orchestra, is a vocal advocate for contemporary work being played at concerts.

“I love coming to a concert where I know none of the music and I am introduced to something new. It keeps music exciting! I had no favorites tonight, I loved it all,” Clark said after the concert.

Without context of violin performance, and the mixing of both classical techniques with contemporary creativity, guests may not have understood the entirety of the program.

“In simplest terms, some of the pieces were minimalist and some complexist,” Brooks said.

The recital began with a piece named “Nosotros,” a 2004 composition by Hugh Levick written for solo violin and pre-recorded sound. The pre-recorded sounds were comparable to the jungle or a rainforest with inputs of drums and rattles. The violin solo lacked a definitive melody, but was heavily featured in conjunction with the recording.

The following two pieces received high praise from the audience after both performances had nostalgic tones with exciting nuances in the music. First was “The Reflections of My Introverted Sneakers,” by Thomas L. Wilson and the second was “….Of the Mind….Of the Eyes,” by Corey Fant. Both pieces were also 2016 compositions included in the program.

The finale of the first half of the program was written by Frank Felice: professor, composer and sound engineer for the program. This is one of two of his pieces included in Brooks’ program. Felice’s 2001 piece was entitled “Brace Yourself Like A Man” for violin and recorded medium.

Until this point in the evening, the applause had not reached the volume it did at the conclusion of Felice’s piece. The composition showcased the years of training that Brooks has in violin performance.

It also showcased the enormous amount of energy that can be produced by a single composition. The audience watched Brooks dance with his violin in hand, playing every note presented in front of him.

Jacki Volk, a senior violin student, impatiently awaited the performance to resume after the intermission.

“I can’t wait until the second half, I’m having so much fun. I live for this kind of stuff,” Volk said.

After the intermission Brooks started his set with the same energy that was in the room beforehand. He began with Patrick Long’s 2001 piece “Shadow Steps.” His care to dynamic contrast throughout the piece kept listeners intrigued all the way until the end.

James Aikman’s “Fantasy” followed. Aikman came for the performance of his piece and Brooks acknowledged him in the audience, receiving high praise for his work from Brooks and the audience.

As the program moved forward, Brooks played another of Felice’s pieces, entitled “Quatre Regards dans la Belle Jarre” which translates to “4 Glances in the Belle Jarre.”

“It’s a pun on a Sylvia Plath poem,” Felice said.

This piece contrasted from the other pieces Brooks performed because it used logic-based live effects during the performance and used an electric violin instead of an acoustic violin.

Brooks closed his recital with a piece written by Filipe Leitao, whom he describes as “being one of the more talented people I have met in my life.” The piece was accompanied by a video presentation created by videographer Ioanna Mailli.

“Everything went great,” Felice said afterwards. “This was the best run through of the program by my knowledge, and I’m so glad we had an audience so receptive to music today.”

“The Duckwall series tends not to get a lot of attendance, but I am very pleased by how many people came tonight,” he said.

The next Duckwall Artist Series event is on Oct. 3 featuring David Murray.