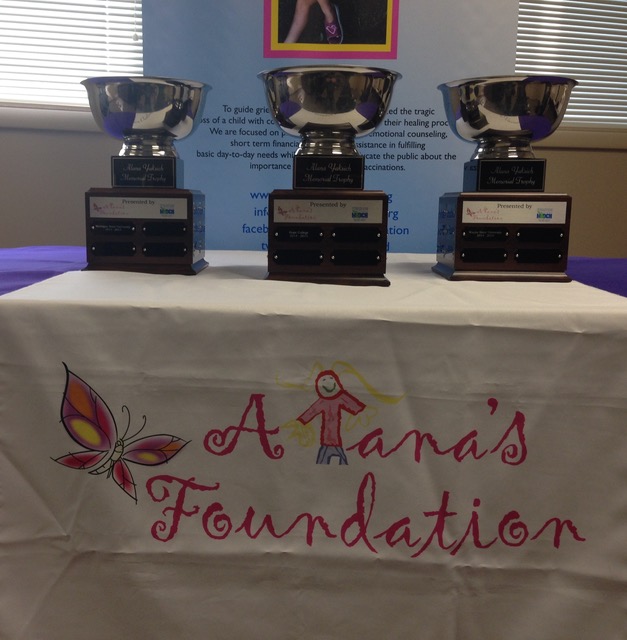 The winning university receives the memorial trophy with the school’s name engraved on the plate.  Photo by Brittany Bluthardt.

Over 1,500 Butler University students, faculty, staff and alumni have received a free flu shot on-campus in collaboration with a national flu shot competition.

Butler is competing in the Alana’s Foundation National College/University Flu Vaccination Challenge. The school with the highest number of recorded administered flu shots wins a trophy in honor of Alana Yaksich, a 5-year-old girl who died from flu-related complications in 2003.

After receiving a flu shot, the participant can fill out a survey on the Alana’s Foundation website to have their flu shot counted for points.

Thirty-two schools from 11 different states are competing in the national competition. Some universities include University of Wisconsin-Madison, Valparaiso University and University of Michigan. Butler is ranked in second place behind Calvin College for the most flu shots administered for a small university as of October 16.

The Alana’s Foundation connected with Butler through promotions via the American College Health Association listserv and a coordinator from the Indiana State Department of Health to bring awareness to the competition.

“We ultimately want everyone to be happy, healthy and successful,” Howerton said. “We wanted to make sure there wasn’t a barrier to the student getting a shot because we know it helps our campus stay healthy.”

Since Howerton came to Butler in 2011, free flu shots have been available to students every year. Flu shots are offered prior to fall break and take around two weeks to provide full immunity, so when students come back from fall break, they are immune to the flu at home and do not bring the flu back to campus.

“I don’t think people recognize there can be some very serious complications from the flu for some individuals,” Howerton said. “Even if it is hard for you to get a flu shot, what it means to the people around you and your health is important. You get a double-bonus win. You can help yourself and help others, too.”

The winner from each category receives the memorial trophy with their school’s name engraved on the plate. Yaksich said it is a traveling trophy, and universities enjoy keeping it in their hands.

“Just by having the trophy and displaying it at schools, it really does serve as motivation to try and retain it at their school,” Yaksich said.  “We’re pleasantly surprised that it seems to work with this age group.”

The free flu shot walk-in clinics were located in the Reilly Room and HRC Conference Room and ran through Oct. 5. Participants filled out an information sheet at the event, and they did not need to provide an insurance card.

“Hopefully we can get them in the habit of getting vaccinated on a yearly basis now, so they’ll carry that practice into their adult and family life,” Yaksich said.

Health sciences students were also involved in the process. Health Services used the help from students at IUPUI’s nursing program, Butler and Marian University. The student volunteers are certified to give flu shots in their practice before coming to the walk-in clinic.

“It is the best protection against the flu someone can possibly have,” Heckathorn said.

Other Butler students were involved in the promotion of the event and competition. Junior journalism major Jacob Lenfestey created a video story about the free flu shots.

“It’s such a great opportunity for students to be a part of a really collaborative effort,” Howerton said.

“Promoting health and wellness for my students is a top priority for me,” Ross said. “The flu may seem benign, but it’s so important to talk about.”

Ross and Howerton hope to continue to offer free flu shots and to be a part of the competition in the future.

“The hallmarks of a Butler education is having hands-on accessible learning,” Ross said. “We’re all a part of something larger to advance health and wellness awareness.”

The competition ends on Dec. 8, which is the last week of National Influenza Vaccination Week.