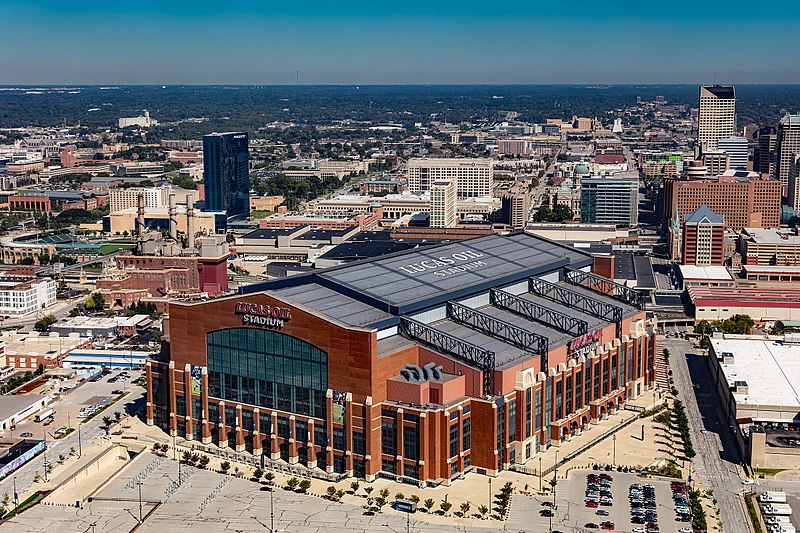 Lucas Oil Stadium is the home of Indianapolis’ professional football team, the Indianapolis Colts. The retractable roof stadium was finished in 2008 for $720 million. Photo by Wikimedia Commons.

Indianapolis may only have the Colts and Pacers as major sports league teams, but there’s more to the Indy sports scene than initially meets the eye. It has hosted some of America’s biggest sporting events, such as the 2012 Super Bowl and two Final Fours. Here are the top five Indianapolis sports venues worth checking out, starting with the top attraction.

Overhead view of the Indianapolis Motor Speedway in 2016. Photo from Wikimedia Commons.

Opened in 1911, IMS is a must for any sports fan. It is the world’s largest sports venue and has over 257,000 permanent seats. The track was originally made entirely of bricks, leading to its nickname, The Brickyard. It spans 2.5 miles and could fit Vatican City, Yankee Stadium, the White House, Liberty Island, the Taj Mahal, the Roman Colosseum, Churchill Downs and the Rose Bowl with room to spare. The Indianapolis 500 and NASCAR’s Brickyard 400 are the two main races at IMS every year and the Indianapolis 500 this past May marked the 101st running of the race. In addition to the racing events it hosts, IMS also features the Brickyard Crossing Golf Course, home to the Indy Women in Tech Championship LPGA event that started in 2017. If that wasn’t enough, IMS transforms into an airfield for the Red Bull Air Race once a year, too. This storied raceway was named the fifth most iconic sports venue in history by Bleacher Report.

The outside of Lucas Oil Stadium before the 2010 NCAA men’s basketball final four. Photo from Wikimedia Commons.

Lucas Oil has already built an impressive resume despite only opening in 2008. The $720 million project that includes a retractable roof was the home of the Indianapolis Colts since it was built but has also hosted major college sporting events. Lucas Oil hosted the men’s NCAA Tournament Final Four in both 2010 and 2015, as well as every Big Ten football championship game, which started in 2011. It was in this building that Gordon Hayward’s half-court heave was inches away from giving Butler the 2010 national championship and completing one of the great underdog stories in sports history. Named the 2009 Sports Facility of the Year by Street and Smith’s SportsBusiness Journal, it also was the home of Super Bowl XLVI between the New York Giants and New England Patriots.

Photo of Bankers Life Fieldhouse in 2012. Photo from Wikimedia Commons.

A list of Indianapolis sports venues would not be complete without the home of Indiana’s professional basketball teams, the Pacers and Fever. Indianapolis’ largest basketball facility also hosted the Big Ten men’s and women’s basketball tournaments, as well as the 2011 and 2016 NCAAW Tournament Final Fours. That being said, Banker’s Life Fieldhouse is used for more than just basketball. Everything from Cirque du Soleil to Taylor Swift has made a stop since its construction in 1999.

Hinkle Fieldhouse’s significance goes far beyond serving as the home of Butler’s basketball and volleyball teams. When Hinkle was built in 1928, it was the largest basketball arena in the United States. The first major renovation was made in 1989, which included a new public address system and new chairback seats in the lower level. In 2014, $36 million worth of upgrades went in, leading to a student-athlete academic center, new offices, and a new sports medicine center among other things. The arena was called Butler Fieldhouse until it was renamed in honor of former multi-sport coach and athletic director Paul “Tony” Hinkle in 1966. Six U.S. presidents, four professional basketball teams, and both the NBA and ABA All-Star games made appearances at Hinkle.  During World War Two, Hinkle served as a barracks for the American military. It also held the largest crowd ever to see a volleyball match in the United States when 14,500 people came to watch the gold medal match of the 1987 Pan American games. And of course, the Indiana high school championship game that inspired the movie “Hoosiers” was played here, too. In 1987, Hinkle Fieldhouse was declared a National Historic Landmark.

NCAA Hall of Champions in August of 2017. Collegian file photo.

Located right off the canal next to the NCAA headquarters, the NCAA Hall of Champions offers a different kind of sports experience in Indianapolis. The Hall of Champions offers two floors of interactive exhibits to give visitors a better understanding of the NCAA’s history, as well as what is currently happening in the world of college athletics. The first floor has artifacts and NCAA trivia for a variety of sports. Floor two features a 1930s retro basketball court and other hands-on exhibits. You can even have the rehearsal dinner for your wedding and other events here.