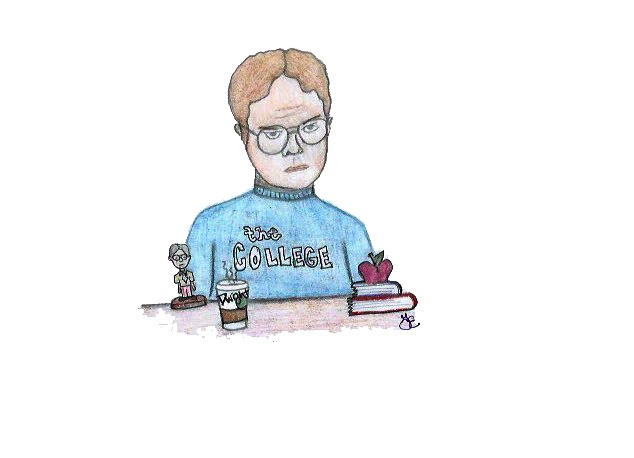 On the second day of my media literacy class, my professor asked the class what forms of media have they been exposed to lately. In other words, she wanted to know what shows, movies, or music we have been procrastinating our studies with. Of the 25 students in my class, six of them answered with the show “The Office.”

I started and completed my latest binge of “The Office” this past June. Although it was my fourth completion of the series, the show never felt flat or repetitive. Instead of mindlessly watching it and enjoying the performances by Rainn Wilson, Steve Carell, Jenna Fischer and the rest of the Dunder Mifflin-Scranton branch, I started to search for what made this show so rewatchable, so relatable and so relevant despite ending four years ago.

With that said, I present to you why the relationship between “The Office” and the common college student is an undying love that burns hotter than the fire that Ryan’s cheesy pita started.

The show changes its focus, but the viewer compromises

The whole premise of the first season is that office work is boring. Although it hints at a few subplots and character arcs that succeeding seasons go on to explore, the big picture around those first six episodes is that work sucks, and there is always going to be a superlative in your life that could be your subordinate.

As the show progresses, the episodes stray further away from the awkward humor and themes of boredom and hostility in the work environment that drove the first two seasons and begins to tell more personal stories revolving around the characters’ relationships with each other.

The awkward humor never fully vanishes from the show, but does not play a pivotal role in the show’s second half, whereas the first half comprises just about all of Carell’s dialogue as Michael Scott. “The Office” had to change its focus from an awkward comedy to a story more about relationships between the characters in order to span nine seasons.  Moreover, like how “The Office” changes, students can become a completely different individual by the time they graduate.  Every opportunity, lecture and experience one is exposed to can be transforming.

An unclear end goal is natural

Like the characters on the show, students at Butler have their own ideal American Dream or aspirations for which they strive. However, as the show progresses, the characters’ aspirations change thanks to experiences each one has.

After multiple viewings, the audience has the opportunity to watch the characters discover what their true aspirations and desires in life are and how they achieve those things.

At the start of the series, the viewer sees Jim Halpert and Pam Beesly as two young, finitely motivated employees that hope their careers naturally lead them to their aspirations, which are sports media and art, respectively.  It is not until they leave the comfort zone of both their careers and their eventual relationship that they achieve what they forgot they dreamt of at the start of the show.

For Michael, we witness a mindless, yet gifted branch manager whose sole aspiration is for his employees to like him. By the end of his run at season seven, it is simply to find that one person who likes him, which the viewer discovers to be human resources representative Holly Flax. Michael loves her so much and becomes so important to him that he cuts all ties with the only consistency in his life since 1992, which is Dunder Mifflin, and moves to Colorado with Holly with no plan other than to marry her and see where their lives together take him next.

To me, this aspect of the show has always been reassuring. The show basically reminds the viewer that it is okay to not have everything figured out, which is difficult to do at any point in one’s life, let alone college.

It is a comforting procrastination device

Odds are you are not getting much done while you are watching Dunder Mifflin-Scranton struggle to get anything done. And that is okay.

Sometimes, we all need something to escape the overwhelming feeling that school tends to put on the common student. A show like “The Office,” a comforting, well-written, naturally funny and familiar story serves as an effective coping mechanism for the burden that school can.

Family and the good ol’ days

Family is the foundation of life. It comes before everything else and provides us with lessons, experiences and ideals that no college or workplace can offer. One could argue that those figurative families you make with your friends, coworkers, classmates, etc. play just as pivotal a role in our lives as our actual families do. And in some instances, wind up becoming our actual family.

Watching the Scranton branch employees settle differences, tolerate each other, grow close together, fall in love with each other and go through life together is the shows finale is so upsetting. The viewer witnesses the birth, growth and parting of a family.

With that said, the show represents what all families, both figurative and biological, go through: birth, growth and departure.  Eventually, you will move out of your parents’ house or move away from your friends you grew up with.

It is when Michael Scott unexpectedly leaves the family he unknowingly made in Scranton behind that reality strikes the viewer and characters that nothing is permanent and moments, things or even people we may not have fully appreciated can disappear at any time.

The show reminds you that family can happen come from anyone and anywhere and you will not realize the significance of the families you have until they must depart.

To quote Ed Helms’ character, Andy Bernard, “I wish there was a way to know you were in the good old days before you’ve actually left them.”