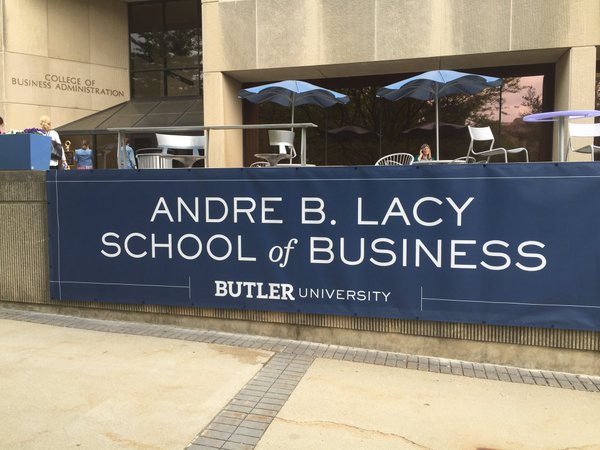 The company, MJ Student-Run Insurance Company, is part of the Davey Risk Management and Insurance Program in the Lacy School of Business. A group of risk management students and faculty advisor run the company.

The student-run MJ insurance firm is a fully-functioning company run by students in the Davey program. The purpose of the company is to allow students an opportunity to gain experience in hands-on situations in the career field they are pursuing.

The firm is named after MJ Insurance, its donor and benefactor. MJ is also one of the largest risk management and benefits consulting private firm and insurance agency in the United States. MJ Insurance’s headquarters are in Indianapolis and the company holds a close relationship with Butler.

Zach Finn, clinical professor and director of the risk management program, is also the faculty advisor and chief risk officer for the MJ student-run firm.

“What we’re trying to get the industry to understand is, rather than trying to recruit people off the street and train them in the industry on the job, there are actually academic programs out there that do quite an effective job of already doing that,” Finn said.

The insurance industry has 400,000 jobs that need to be filled between now and 2020, Finn said. He explained the aim of this student-run company is to give the students real-world experience before their careers begin.

The company started in a “feasibility study” class of risk management students last fall to determine their odds of success in starting the company. This year, the students in the class are running the company.

Derek DeKoning, senior management information systems and risk management major, is the student CEO of the student-run firm. DeKoning was the only junior in the feasibility class last year.

“It’s really been big for me and my career, learning the industry and also getting my name out there,” DeKoning said.

Josh Toly, president of Gamma Iota Sigma, the risk management and insurance fraternity on campus, is another student heavily involved with the student firm.

“This is huge when looking for full time opportunities after graduation and being able to explain that you’ve had real, live working experience running an insurance company,” Toly said.

The company’s domicile is in Bermuda, the insurance capital of the world. As a captive company, MJ Insurance is associated with a domicile— a “home base” facility.

Finn said a perk for students taking the class and working at the company is being able to visit Bermuda.

Finn and DeKoning went to Bermuda Sept. 13 to speak at the Bermuda Captive Conference.

The conference consists of forums, speakers and meetings with representatives from global insurance firms, including companies such as Aon, Morgan Stanley and Wells Fargo.

The firm insures all of the fine art and rare texts on campus, along with the telescope in Holcomb Observatory. The Real Business Experience group projects are also insured by MJ Insurance.

“You know when you insure a university that you’re insuring a lot of unique things — armed law enforcement, dogs that could bite, fraternities, risky stuff,” Finn said.

He said MJ Insurance is making efforts to better the world with their insurance. The firm created a specific insurance claim for Marcus to support relief efforts in the recent Manchester terrorist bombing. Every time Butler replaces BUPD’s bomb-sniffing dog, the university will donate one bomb-sniffing dog to the Manchester Police Force in England.

“We put something out there to make the world better,” Finn said. “It makes it real for our students.”

“It’s been incredible to get global and different perspectives on the industry as a whole,” DeKoning said. “It opens your eyes to what goes on behind the scenes a lot more than I think you can learn in a classroom. Learning by doing is a whole other experience.”