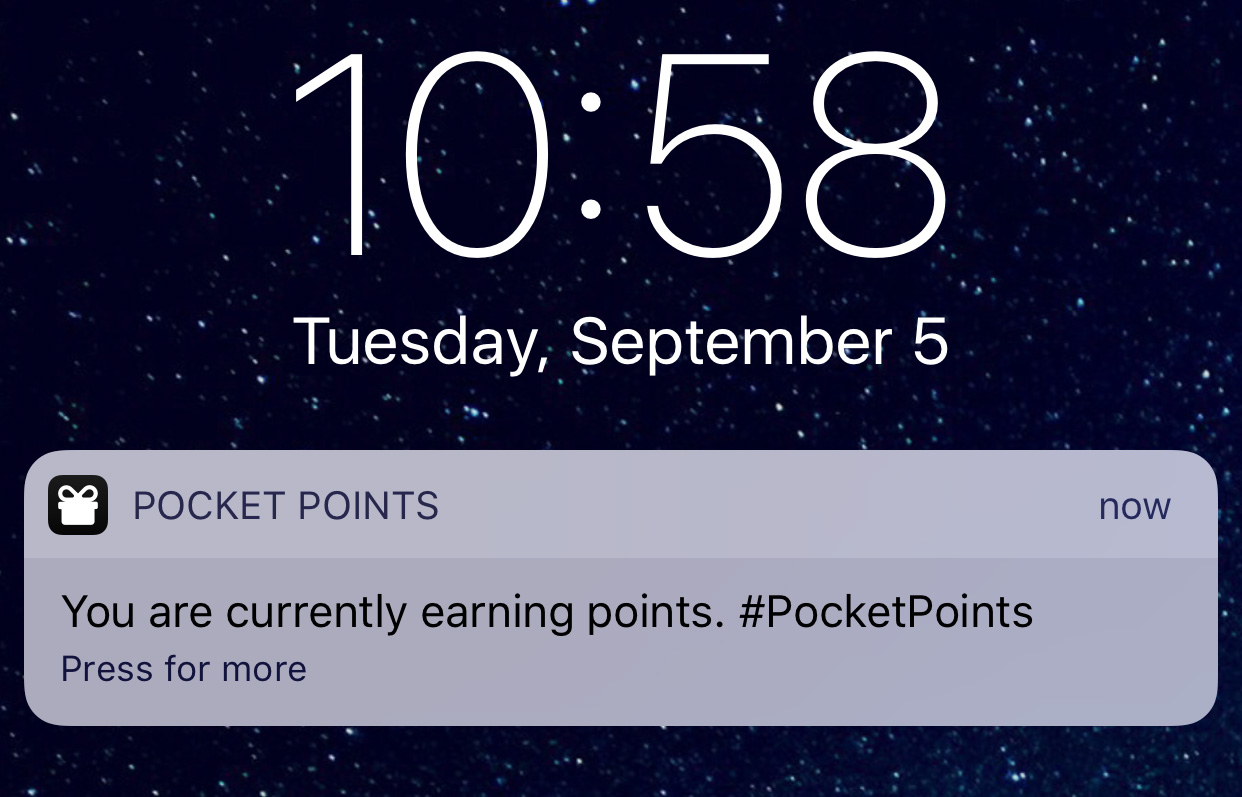 Pocket Points, an app founded in 2014 by two students at California State University, Chico, allows students to earn points while on a campus as long as their phone is locked. These points can be redeemed for discounts on food and clothing items from companies that have partnered with the app.

The app works by tracking the user’s location. At Butler, simply being on campus is not enough to earn points. Only the academic buildings, Starbucks and the library have been specifically geofenced by the app so that students in Greek houses and residence halls cannot earn points while they sleep. Only when a user is inside those areas with their phones locked will they start to earn points.

The app also features a leaderboard which adds a competitive element by displaying the top users of each day, week and overall for that user’s campus.

Users can earn roughly one point every 15 minutes. However, the more users in an area with their phones locked, the faster all of them will be able to earn points.

The different businesses that have chosen to partner with Pocket Points decide how many points are required for any particular reward, varying from five to 30 points per reward, and only one reward can be redeemed per day.

Rewards are all digital, and can be redeemed directly from the app.

Users can browse available discounts and buy with their earned points on the Pocket Points gifts page.

Fourth year pharmacy major Isaac Warshawsky, who also serves as a Pocket Points student ambassador, said that the app exceeded its download goals on campus and over 100 students are earning points at any given time.

Butler is one of the first universities of its size to offer Pocket Points, said Warshawsky, as the app is most common at larger universities with large markets of students.

Mikowski working to bring Pocket Points to campus back in Jan. 2017 when she was looking for a project for the Student Initiatives Board (SIB) of Student Government Association.

Part of the SIB’s job is to help solve some of the problems facing students on campus, Mikowski said, and she recognized overuse of cellphones was one of these issues.

“It is really tempting to not be on my phone, and I noticed that everyone around you is flipping through their phone,” Mikowski said. “It was getting to the point where I noticed teachers were putting it in their syllabi.”

Political science professor Margaret Brabant is one of those professors. Three years ago, she began enforcing a “parking policy,” where students earn 2.5 percent extra credit to their final grade at the end of the semester if all the students agree to place their phones on one table for the entirety of every class.

Brabant noticed cell phone-related distractions were becoming an issue. They would break down the classroom community.

“These distractions, they break up that capacity, I believe, for us to engage in the conversations and discussions that make classroom learning fun,” she said.

Even when students have their phones in their pockets, Brabant said they are still distracted by their devices. By having a “parking policy,” students create a larger disconnection between themselves and their phones.

“I think the physicalness of it also matters,” Brabant said. “Because they see it, it’s there, and it’s there with everybody else’s phone. So they know nobody else is cheating.”

In addition to keeping students focused, the “parking policy” also allows professors like Brabant to focus on teaching and class discussions rather than catching distracted students.

“The real benefit of [the policy], at least for me, and I think many of my students, is that it really does help us perceive ourselves to be this community of scholars,” Brabant said.

Since implementing the policy, Brabant has noticed students are more attentive in class and are sometimes so detached from their phones they accidentally leave them in the classroom. Brabant said she has not had any students complain about the policy.

At first, Mikowski thought the idea of offering extra credit to students to stay off their phones was ridiculous, but then she saw the policies were effective.

“People did stay off their phones, so when I heard about the app I thought people would use this,” Mikowski said.

According to a press release issued by Pocket Points, the purpose of the app is to “fight cell phone addiction”, but it also works to get students connected to local businesses. As a student ambassador for Pocket Points, Mikowski works not only to help promote the app on campus, but to help build those business partnerships around Butler.

“Pocket Points believes the mobile app will help thousands of local students this academic year be more productive at local schools and help area businesses attract new customers,” according to a press release.

For Butler students, Pocket Points is expanding into Broad Ripple because the company is aware that it is a popular area for students, Mikowski said.

Butler students using the app will find discounts at restaurants like Insomnia Cookies, Subway, Stacked Pickle, Papa John’s and clothing stores like Columbia online. Mikowski and Warshawsky are working on expanding these partnerships.

“We have run into the issue of many businesses needing to approve Pocket Points through corporate, which is hindering some popular businesses from partnering with us for now,” Warshawsky said.

However, partnerships with Scotty’s Brewhouse, Three Wise Men and Hotbox Pizza are all in the works, Warshawsky said.

Even without these real life rewards, some users are finding the app still helps to keep them stay productive.

James McGrath, faculty director of the core curriculum, heard about the app at the presentation Mikowski made to associate deans. Although he said he may not be interested in the discount offerings so far, he has still had a positive experience with the app.

“The message on the lock screen telling me that I am earning points with Pocket Points makes me think twice about unlocking the phone to check my email, get on Facebook or anything else like that,” McGrath said.

Students can download the app on any iOS or Android device and create an account for free.