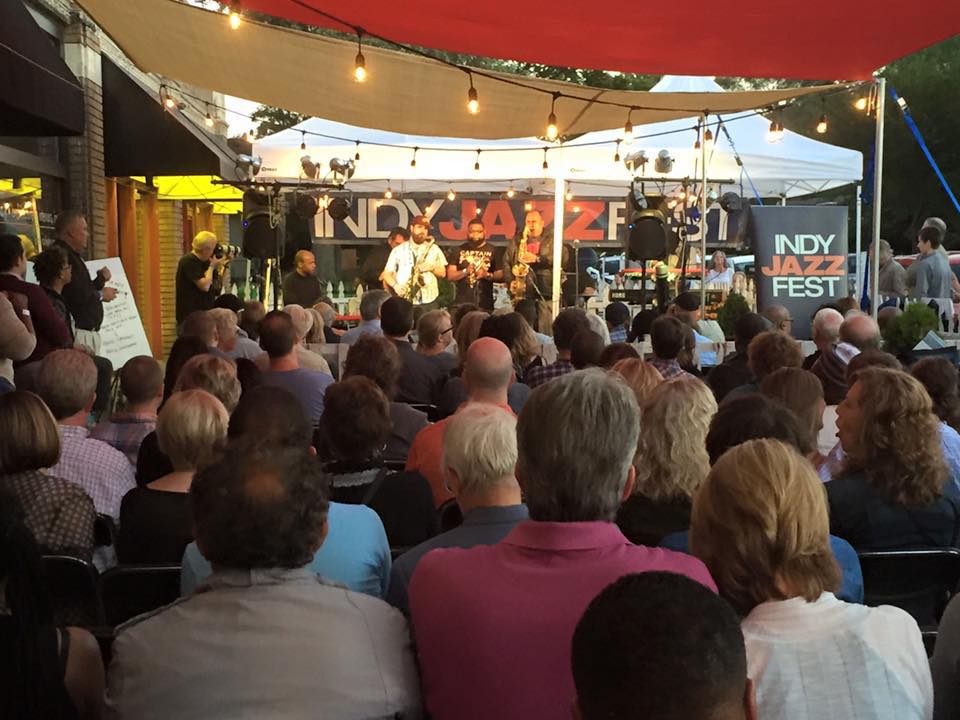 The Indy Jazz Fest Block Party will take place at The Jazz Kitchen on Sept. 23 to celebrate the closing weekend of the festival. Photo courtesy of Indy Jazz Fest Facebook event.

The Indy Jazz Fest is back for the 18th year in a row. The festival includes 10 days of jazz concerts, master classes and panel discussions taking place between Sept. 14 and Sept. 23 in venues all across the downtown Indy area.

This weekend, the finale of the festival, is jam-packed with performances. Friday, Sept. 22, brings about four different shows.

This year the Schrott Center for the Arts is one of the venues for the festival. Last Friday night, Jane Monheit performed her rendition of some of Ella Fitzgerald’s most famous tunes.

Indianapolis Jazz Foundation puts on the Jazz Fest every year. The IJF is a nonprofit organization that is “committed to keeping the legacy and future of jazz in Indianapolis at the forefront,” according to the Indy Jazz Fest website.

The organization was founded in 1996 by Wes Montgomery, J.J. Johnson, Freddie Hubbard and 10 others. The IJF has since grown and now has its very own jazz education program that promotes jazz to Indiana youth.

The students are exposed to life as a jazz musician, performing at events all around the community, working with the pros and even learning how to compose their own music. The IJF’s education program also offers collegiate scholarships that the students can apply for.

When the members of the IJF aren’t working to get jazz into the youth communities, they’re getting ready for the Jazz Fest. It’s a year-long process for the organization.

The Jazz Fest unfolds over the course of 10 days, some of which have multiple concerts, in addition to master classes you can take with some of the country’s top Jazz musicians.

On Sept. 16, Jim Leslie, son of Donald Leslie, the inventor of the Leslie speaker, presented a master class along with Lonnie Smith at the Jazz Kitchen for free.

Donald Leslie is credited with creating and manufacturing the Leslie speaker back in 1937. Leslie was not a fan of the way the Hammond organ sounded in small, confined spaces. So, he built his own speaker.

“When Mr. Leslie presented Hammond with an organ speaker that he had built by hand, the company rejected it — and turned him down for a job,” a 2004 New York Times article read.

Leslie persisted and eventually his speakers were produced by Hammond Suzuki.

Dr. Smith has been referred to as a Hammond organ guru. Back in April of this year, he was awarded with “a National Endowment for the Arts Jazz Masters Fellowship, widely considered the country’s highest jazz honor,” according to an article from the Chicago Tribune.

Also performing this Friday night is The Buselli Wallarab Jazz Orchestra. They will play at the Indiana Landmark Center at 7 p.m. Tickets are priced at $30.

The IJF does offer student discounts. Simply show the ticket clerk your student ID and you will get in for a lower price.

Most of the shows put on by the IJF are for people of all ages, but the Jazz Kitchen, where quite a few performances are held, is a 21-and-over venue. One of Friday night’s performances will be held at the Jazz Kitchen. The IJF Afterset featuring Ghost-Note, Chantae Cann and Polyrhythmic will take the stage at 10 p.m.

Claire Shea, sophomore international studies and Spanish double major, calls herself a jazz enthusiast. She said she looks forward to attending some of the shows this weekend.

“The Jazz Fest is a cool place to be,” Shea said. “I didn’t get the chance to go last year but I’m definitely going this year.”

Shea said she plans to see the Farrelly Markiewicz Jazz Quintet at the Indy Speedway this Friday.

Junior Alex Fenne is a trombone player in the Butler Symphony Orchestra and the jazz combo band. He is an avid supporter of the arts and loves what the Indianapolis Jazz Foundation stands for.

“I love how the goal of the event is to support the future of jazz in the Indy area,” Fenne said.

He said if he can find some free time, he would love to attend some of this weekend’s events.

“I would definitely check out the jazz block party on Saturday,” Fenne said. “Or the afterset on Friday night featuring Ghost-Note and Chantae Cann.”

At Block Party, 14 different bands, including Monika Herzig and The Time Flies, Charlie Ballantine, and The Tucker Brothers will be taking the stage to close out this year’s Indy Jazz Fest. The event will take place at the Jazz Kitchen at 3 p.m.