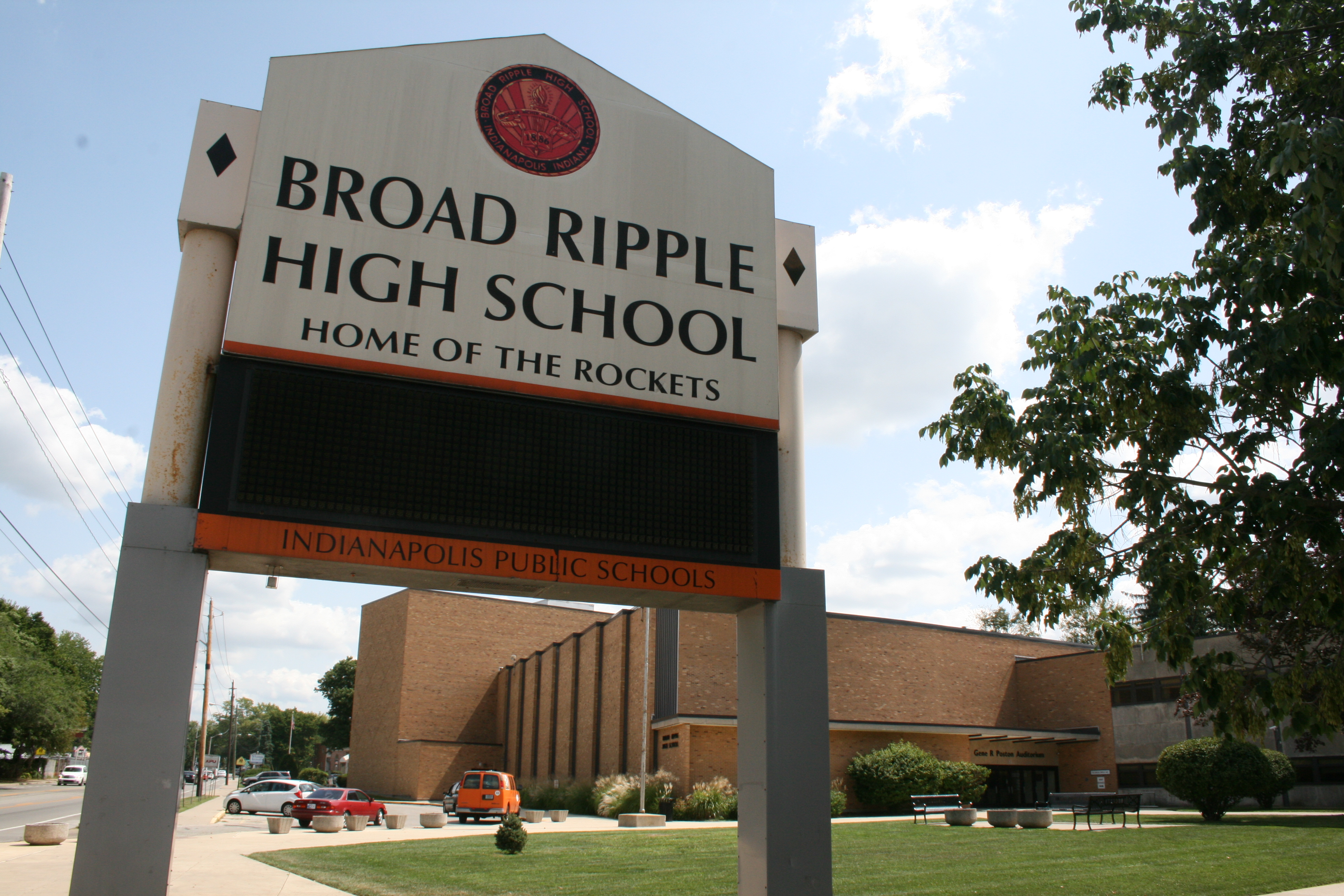 The Board of School Commissioners will vote on the possible closing of Broad Ripple High School on Sept. 18.  Photo by Zach Bellavia.

The Indianapolis Public Schools board announced a plan in June to close Broad Ripple High School for the 2018 to 2019 school year as part of the IPS Strategic Plan.

Speckman said about 40 to 50 BRHS students participated consistently in WITS within the first year it started.

Because BRHS is a magnet school for the arts and humanities, Speckman said it is a good fit for a writing club after school.

“[At BRHS we] found a school and student base that really sort of took to what our program is all about, which is mentorship through creative writing,” Speckman said. “It was indicative of the kind of students who were at Broad Ripple. People were proud of that magnet and of the chance that they had to do creative things, be involved in the arts. I think that’s something that I certainly hope is maintained even if Broad Ripple is closed.”

Michel said he was not looking forward to the class; he took it for the ICR requirement and, being more reserved and introverted, was not sure how he would interact with the high school students.

However, after working with the same group of three 7th-grade boys, his perception changed.

“One day I walked in, and the three kids, two of them came up to me, and said, ‘Oh, we want to work with Eric today,’ and they went up to me and grabbed me before I was assigned anywhere,” Michel said. “I was in with the ‘cool kids,’ like I managed to impress some 7th graders. It was cool knowing they looked up to me and wanted to work with me.”

For open mic at the end of each day, Speckman said instead of reading what the students wrote for the day, a lot of them like to sing their favorite song, play the violin or perform in some way.

“It’s not just about writing,” Speckman said. “It’s about all of those cultural, artistic expressions too.”

The boys Michel worked with often choreographed their own dance and performed it in front of the whole club.

“You could really see their passion come out, and they always wanted to work with me,” Michel said. “So, I went right to them and we were really able to bond. It was really cool just watching them on a day-to-day basis doing what they love.”

Although he can not imagine how the change can be good for the students, Michel said he knows these students can “power through” this challenge.

The decision has yet to be made on the reuse of the facility and land.

Broad Ripple Village Association hosted an open house on Aug. 24 to gauge the community’s opinion on the reuse of the school. Posters with categories — retail, residence, arts, scholastic — lined the wall. Community members put their stickers on the posters to signify how they would like the high school’s land to be reused. Stickers with an “X” marked a member’s most-liked idea.

Attendees of the open house also wrote suggestions about how the high school could be reused. Many stickers and many suggestions were placed and written under a scholastic purpose. Although the building will no longer be a high school, the community wishes to preserve its educational integrity.

Past BRVA President Kent Springer said there is also an online survey for those who could not attend the forum. In an email, Springer said there have been more than 550 people who have taken the survey as of Sept. 11. Based on the open house alone, a vast majority of the community supports BRVA’s position that “the BRHS building should continue to house a scholastic facility.”

“We want it to be public for the residents, and once IPS pulls out, it looks like there’s not a lot of other choices than a charter school,” Springer said. “I think there’s some really good charter schools in town. None have talked to us directly, but I think there’s some good ones in town, and if they’re interested in the facility, I think it’d be great for the residents.”

Springer said most residents probably feel there are enough apartment complexes, as no one voiced preference for residential use. Few voted for commercial use, such as office space.

IPS board member Kelly Bentley said she thinks there are some great ideas out there for the reuse of the property.

“I think it would be great if it includes some continued public use, but we ultimately don’t have full control over that,” Bentley said.

She described the process as “very open,” and the property will go to the highest responsible bidder. Meaning, IPS will take into consideration not only the highest dollar amount, but also how quickly a deal can be closed.

When IPS announces the property for sale, offerings have to follow certain criteria or qualifications. Springer said BRVA spoke with IPS, and agreed BRVA can be the community partner to help build the criteria for the bid process.

“We’re hoping that part of this input will be in that criteria,” Springer said, referring to the posters with suggestions and stickers. “That we want it to be scholastic, we want theater use, we want community access to the building. That’s why we’re gathering this input so we can represent our community and say, ‘this is what we want to see at the facility.’”

IPS had community sessions themselves where people could voice their opinions.

“The biggest concern was the legacy of the high school,” Springer said, who had attended the community sessions.

One example is of a student’s basketball jersey hanging in the gymnasium. Steven Jamison died from cancer while attending BRHS, and members want to know what will happen to his legacy. If another school came in, there is more of a possibility t the jersey can stay.

Springer said he hopes IPS looks at the criteria when considering bids, that they will not accept a bid from somebody who wants to develop apartments over a charter school or theater use.

However, Bentley said IPS does not control what happens to the land.

“I think developers will want to be sensitive to what the community wants,” Bentley said. “But ultimately, we just sell it or lease it or whatever we decide to do with it, and that money then needs to go back into the facilities and the students we do have.”

According to the IndyStar, the estimated value of the 16-acre property is $6 to $8 million.

BRHS has been part of Broad Ripple since 1886. In 1981, BRHS became a magnet school for the humanities.

In keeping harmony with Broad Ripple’s cultured community, many members wrote comments and voted for the arts and theater category.

“There’s theater companies downtown, like Theater on the Square and Phoenix Theater, that I believe they would do productions here in Broad Ripple if they have a place,” Springer said, who also mentioned BRHS’s auditorium and full orchestra pit. “So if that auditorium was available, I believe we could place theater productions in that auditorium.”

“Not only do the arts teach you — and humanities too — teamwork, cooperation, the importance of being reliable, responsible, trustworthy, it also gives you a sense of self-worth,” Young said. “And for a lot of kids, it’s the only reason they stay in school.”

BRHS freshman Ann England has participated in WITS for three years now. For open mic, she shares her writing and sometimes sings, as she is part of the choir magnet program.

When England heard the news, she cried. If the school closes, she wants the building to still have an educational or arts purpose.

To England, BRHS is “the most accepting school.” When she came out as bisexual, she was accepted with warmth and happiness. If students teased or bullied her, teachers came to her defense.

Bentley has asked at previous meetings what will be done to assimilate the students into their new school. Currently, both closing and remaining schools have transition teams.

“I think there needs to be period of mourning,” Bentley said. “Once the decision’s made, people are going to be unhappy and they have to be able to feel like they can share that. But at some point, the adults have to come together and start working with the kids in their best interest. I anticipate mostly everybody will do that. So hopefully they’ll all pull together and realize, we’re unhappy too, but this is your future at stake and we need to make sure you’re well taken care of and this is what we need to do.”

Speckman said he is hopeful that WITS will continue at Shortridge High School.

“We may be able to follow the students to Shortridge and maintain the sort of familiarity with them,” Speckman said. “I think it will be possibly a really nice thing to come into a new building but still know some of the people there. Our program will continue no matter what happens to Broad Ripple, but it certainly has been an amazing place to build up the WITS program.”

The Board of School Commissioners will make a final vote on the closure of BRHS on Sept. 18.

“I hope by some miracle this school doesn’t close,” England said. “Because I’ll be heartbroken if it does.”