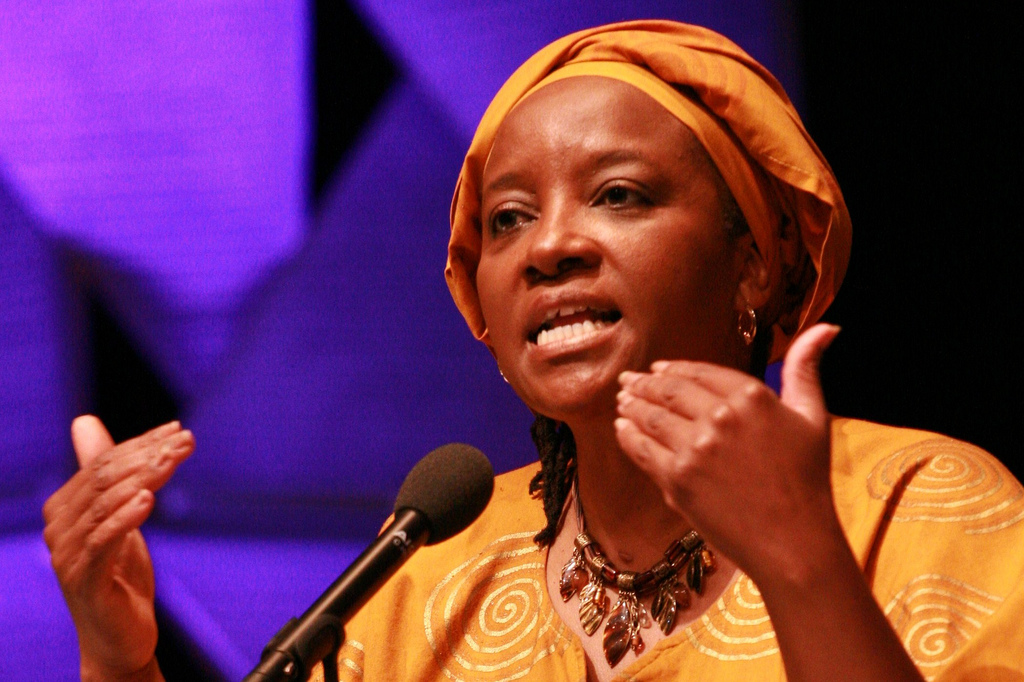 Naomi Tutu spoke at IdeaFestival in 2009. Photo courtesy of Flickr.

Nontombi Naomi Tutu, daughter of Desmond Tutu, will be at Butler University next Tuesday to talk about gender-based abuse.

Naomi Tutu, a race and gender justice activist, will speak alongside Christina Hale, the CEO of Leadership Indianapolis, and author Gail Masondo, on Oct 3 at 11:30 a.m. in the Reilly Room.

Her father is is a human rights activist who made many firsts in the African-American community. He was the first black man appointed as the Anglican dean of his church in Johannesburg in 1975, according to a biography posted in November of 2016.

Tutu is the third daughter of Desmond and Nomalizo Leah Tutu. She was born in South Africa and has lived all over the world, including the United Kindom, Switzerland and the U.S., where she currently resides.

She graduated with a bachelor’s in economics and French from Berea College in Kentucky. She then received her master’s degree in international economic development from the Patterson School of Diplomacy and International Commerce at the University of Kentucky.

Indiana holds the second highest rate of forced intercourse involving women between the ages of 14 and 18 in the nation.

On average nationally, about 10 percent of women between the ninth and 12th grade that have been raped. In Indiana, that number jumps to about 17 percent.

Only 15 percent of sexual assaults and rapes are reported to legal authorities in Indiana.

These statistics from the Indiana Public Media’s website are the reason that groups like the Game Changer’s Forum and many others have been founded.

After Tutu finished school, she went to work as a consultant for a private company in Connecticut in addition to doing her own personal consulting out of the office.

In addition to these schools, Tutu found herself employed at University of Connecticut, Brevard College, and University of Cape Town. She switched her career focus to public speaking in the early 2000s. She also authored the book, “The Words of Desmond Tutu” in 1989.

Madison Miyake, a sophomore pharmacy student, said she is very passionate about women’s rights and is very excited to see Tutu speak.

“I don’t know much about Naomi,” Miyake said. “But I do know that she’s a women’s rights activist and she seems pretty accomplished, so I think the forum will be interesting.”

She explained she had not heard of the other women presenting in the forum, but thinks the concept of these women coming together to speak about the issue is great.

“I’m in the Resistance & Rights: Global Women [global historical studies] class and we’ve been talking a lot about the effects of gender bias,” she said. “I think it’ll be cool to see other takes on the topic.”

Christina Hale and Gail Masondo will speak Tuesday as well. Hale served on the Democratic committee of the Indiana House of Representatives from 2012 to 2016. She also serves on the the Domestic Violence Network of Indiana and the Indiana Coalition to End Sexual Assault.

Masondo was the first African American woman to produce any special project for Warner Brothers Studios. She co-executive produced, “A Place Called Hope – a project to help bridge the racial divide with music.” She is also serves a counselor to both victims and perpetrators of gender based abuse and human trafficking, according to the Desmond Tutu Center website.

The event is being put on by the Desmond Tutu Center and Saving Orphans Through Healthcare and Outreach.

Since switching her career to mainly public speaking, Tutu has spoken at the Women and Gender Resource Action  Center at Trinity College and the International Women’s Day Conference back in 2014.

She speaks primarily solo, on topics like gender coalition, finding your spiritual place and the principals of Martin Luther King, Jr., but she does speak with groups as well.

When speaking with Hale and Masondo at the Game Changers Forum, she will be talking about gender and human rights, along with gender bias abuse.

According to the Eventbrite website, “The Game Changers Forum brings together a stellar group of scholars, civic leaders and celebrities to explore the economic, social and medical impact of gender based abuse. It provides a unique opportunity to raise awareness of a common problem and to dialogue together as we contribute to solutions.”

Student tickets for the event cost $15 and must be purchased by Sept. 30 on the Eventbrite website. The event also includes a  lunch that will be served at no additional cost. Seating for the event is general admission. The doors to the Reilly Room will open at 11 a.m.