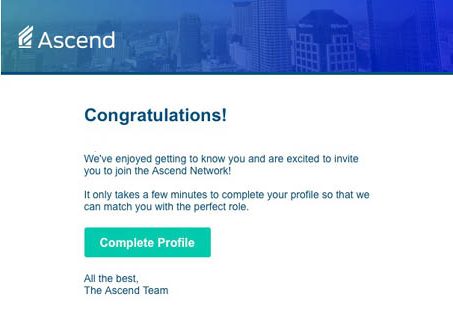 Starting this semester, Butler partners with the non-profit Ascend Indiana to connect students to employers in the state of Indiana.

Ascend works with a dozen colleges and universities in the state to help connect students to internship and job opportunities at more than 20 major corporations, including Eli Lilly, Cummins and OneAmerica.

The Central Indiana Corporate Partnership, a collection of chief executives from many of Indiana’s prominent institutions, launched Ascend in October 2016.

Gary Beaulieu, director of Internship and Career Services, said the decision to work with Ascend was based on the unique opportunities they could provide students.

“We decided to partner with them because it’s an opportunity to help our students connect with employers in ways that we couldn’t do in the past,” Beaulieu said.

Tyler Ewigleben, Ascend manager of talent identification, serves as the organization’s representative to Butler. He said the advantages of students working with Ascend are twofold.

First, Ewigleben said he hopes to help demystify the job search experience for students, giving them objective data on jobs that they are matched to.

“For the student that’s often overlooked by employers, we’re providing that notoriety and elevating them as candidates to those employers,” Ewigleben said.

Second, he said working with Ascend makes it easier for students to connect to multiple potential employers through one source.

Although a focus is being placed on liberal arts and science students, who Ewigleben said can be overlooked by employers, Beaulieu said that students of all majors are encouraged to participate in the program, which is available at no cost to students.

“That’s the great thing about Ascend,” Beaulieu said. “Because they act as an advocate for students and employers, these employers will see candidates that they would never have ordinarily looked at, because they’ll be looking at a wide variety of students.”

Ewigleben said that while most of the students he works with are upperclassmen, he’s happy to meet with first-years and sophomores as well.

Students interested in working with Ascend first fill out an online form before arranging a time to meet with Ewigleben during one of his weekly visits to campus. If a student is deemed to be a good match with Ascend’s program, they will have the opportunity to join the Ascend network, an online platform which will help match them to employers that Ascend works with.

Students who need help developing their resume or who are looking for a job not in the network may be referred to Internship and Career Services.

Based on a variety of factors, including skills and work preferences, students in the Ascend network are matched to internship and job opportunities, and should they chose to apply for a position, their application comes with a referral from Ascend.

“Because they trust us, that referral link holds weight,” Ewigleben said. “It might be the difference between them and a candidate that just applies through some type of job board.”

Hattie Saylor, senior strategic communication major, is now on the Ascend network after meeting with Ewigleben earlier this semester. Saylor said she liked that Ascend looks at more than just her major, taking into account her workplace preferences in matching her to potential employers.

“My work style, what I look for in a culture of a company, and all of that is more important to me than whether it’s a marketing job or a communications job,” Saylor said.

Through the program, Saylor hopes to connect to employers she might not normally find on her own as she considers her post-graduation options.

In his first three weeks on campus this semester, Ewigleben has met with more than 20 students, and he noted roughly double that amount are signed up for future meetings.

Beaulieu said he’s been very impressed with the level of participation from Butler students thus far.

“We’ve had a fantastic student turnout,” Beaulieu said. “I had no idea that it’d be this strong, but it’s what we’re hoping for.”

Ewigleben, who also manages Ascend’s partnership with IUPUI, said he has enjoyed getting to work with Butler students so far this semester, and stressed how important it is for him to really get to know the students he works with.