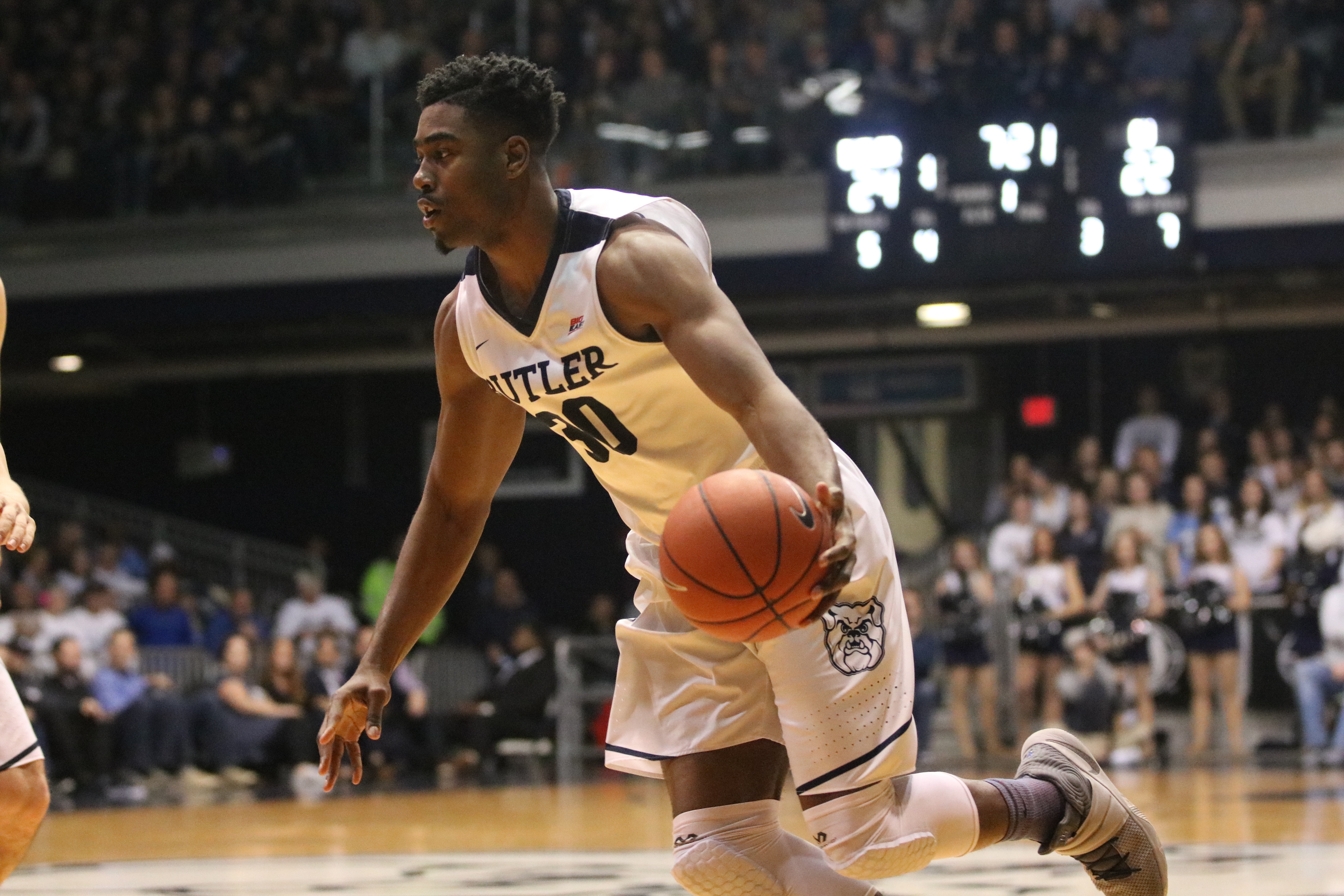 Then junior forward Kelan Martin dribbles against Creighton on Jan. 31. The Bulldogs host the Bluejays on Feb. 20, 2018. Collegian file photo.

The Big East conference schedule for the 2017-18 edition of Butler men’s basketball is finally here. The Bulldogs finished second in the conference last season with a 12-6 record against Big East teams. Here are five games to look for when Big East action kicks off on Dec. 27 at Georgetown.

Here it is! #GoDawgs pic.twitter.com/gDyHdaR9mj

Since Butler joined the Big East for the 2013-14 season, the Wildcats are the only team to win the Big East regular season championship. The Bulldogs got the better of the 2016 national champions in both meetings last year, so the Wildcats will not be lacking in motivation. Villanova will run through junior guard Jalen Brunson, who averaged 14.7 points per game during his sophomore campaign. Last season’s 66-58 victory at home in January marked the first time in history that Butler defeated the No. 1 ranked team in the country inside Hinkle. As the final buzzer sounded, fans stormed the court in celebration.

Give No.1 & defending champion Villanova their first loss of the year?

The Musketeers’ visit to Hinkle is always one of the most anticipated games of the year, regardless of how the season is going for both teams. Butler took both regular season games last season, but Xavier knocked the Bulldogs out of the Big East tournament. Xavier was the last Big East team standing in the NCAA tournament, making it to the Elite Eight. The Musketeers barely outlasted the Bulldogs, who bowed out in the Sweet 16. Xavier’s two-time All-Big East first team selection Trevon Bluiett will be back for his senior season.

Senior forwards Tyler Wideman and Kelan Martin will play their final home game against the Bluejays. Creighton will be led by senior guard Marcus Foster, a unanimous All-Big East first team choice last season. The Bulldogs finish the year with two games on the road, so senior night will be earlier than it was last season. This game will be the final chance to watch Wideman and Martin at Hinkle. It will also be a chance to say goodbye to the Butler community one final time before their careers come to a close.

The Bulldogs will start Big East play by traveling to face the Hoyas. This game will mark Big East head coaching debuts for Butler’s LaVall Jordan and Georgetown’s Patrick Ewing. Ewing was on the 1984 Hoyas national championship team and won the 1985 Naismith Men’s College Player of the Year Award. Last season’s two matchups were split between the teams, with Butler claiming a 85-76 overtime victory in January and the Hoyas countering by coming into Hinkle Fieldhouse and leaving victorious, 85-81.

The Bulldogs wrap up their regular season with a trip to New Jersey to take on the Pirates. Seton Hall came to Hinkle for the final game of last season and grabbed a 70-64 road victory on Butler’s senior night. Now, Butler is presented with the same opportunity. Adding a Big East road win to the Bulldogs’ resume before the season ends could boost their standing in the eyes of the NCAA Tournament selection committee. This game could also influence the Big East standings, which determine seeding for the Big East tournament.