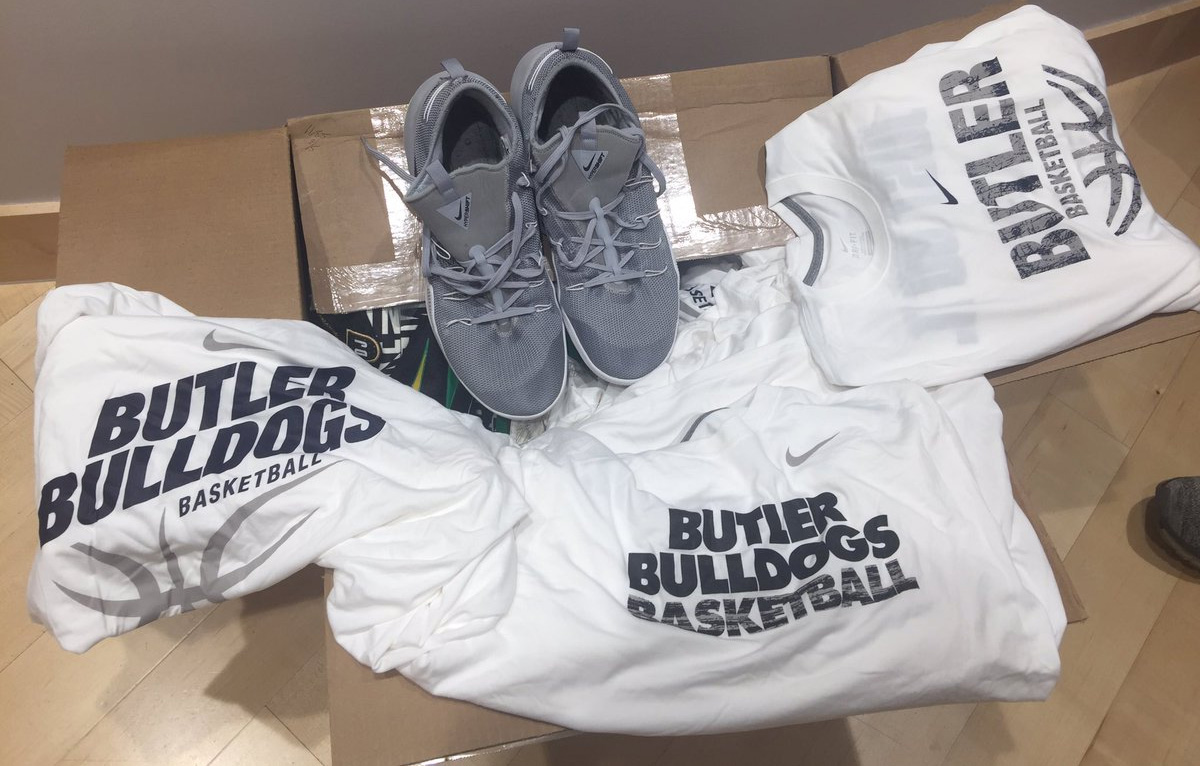 On Sept. 1, Butler Athletics sent boxes full of Bulldog gear to the victims of Hurricane Harvey.

Scott Hall, head softball coach, said he sent out a mass email to all of the athletics department asking what they could do to help.

“I don’t want to take the credit because it really was a group effort between the coaches, staff and players,” Hall said. “We have all kinds of leftover stuff that just sits around so we just said pack up whatever you can donate and we will send it.”

Thousands of schools from every level of athletics donated clothes to hurricane victims the week after the hurricane hit. Indiana was strongly represented in the donations. The IndyStar reported that Purdue, Indiana State and Valparaiso were also among the Hoosier-state colleges that sent their school’s gear to Texas in an attempt to help those who lost everything in the hurricane and subsequent flooding.

Schools from across the country have joined in the cause, but all of these donations were spurred by one man.

On Aug. 28, Kelvin Sampson, University of Houston men’s basketball coach and former Indiana University basketball coach, tweeted out a request to coaches and teams around the country to donate clothes and shoes to hurricane victims.

“I have had so many friends in the coaching profession text and call offering prayers and thoughts for all Houstonians,” Sampson said in a tweet. “They all ask what we can do to help. Well, I came up with something that I think coaches on all levels can help with.”

Sampson requested schools to send 20 of their T-shirts and 10 pairs of their shoes to the University of Houston, if possible.

Coming your way, @CoachSampsonUH. Thoughts and prayers to everyone down there. #HoustonStrong pic.twitter.com/7nZJebXEDl

Bulldog gear headed your way @toddwhitting & @UHCougarBB. Thank you for organizing this effort to help! pic.twitter.com/yfju4jNwAa

Butler’s basketball, softball, track and field, cross country and volleyball programs were among the Bulldog teams that contributed to the donation. Other sports programs across the country pitched in and sent their gear as well, prompting Sampson to issue a response on Twitter three days later.

“As I looked through my Twitter feed during the storm, I was grateful to see so many coaches and student-athletes in different sport programs from one end of the country to the next, taking the time to think of this area and contribute to its relief,” Sampson said in a tweet. “At a time when so many people are struggling, it is comforting to see the love and feel the support that mankind so often displays in time of crisis.”

After hitting near Corpus Christi on Aug. 25, Hurricane Harvey has made its way up the coast of Texas through Houston and into Louisiana. As of Sept. 4, there have been 63 deaths related to the hurricane according to CBS News, and thousands more forced to abandon their homes and belongings.

Gaby denBlanken, a junior dance and arts administration major, is from Houston, Texas. denBlanken’s neighborhood is in one of the areas that fell victim to flooding.

“I see those pictures [of the flooding] and I’m like, that’s where I go to get tacos, that’s my elementary school,” she said. “Even the Houston Ballet got flooded, which hurts me.”

Indiana professional sports teams are also pitching in to the disaster aid. The players of the Pacers and Fever have teamed up to donate $20,000 to hurricane relief. Fans that attended the Colts preseason game against the Bengals last week contributed to the hurricane relief by purchasing 50/50 tickets where a portion of the proceeds will go to hurricane relief.

DenBlanken said the local news stations have been posting aerial photographs of flooded areas to show the residents what their towns and neighborhoods look like.

“It’s heartbreaking when they say that it is flooded and they can’t go back,” she said.

Despite the initial flooding, denBlanken’s neighborhood has since drained and her family is OK.

“They were able to go out and volunteer because the city turned my high school into a shelter,” denBlanken said. “Everybody is just helping each other so I think it is really cool. The response has been unbelievable.”

From President Donald Trump, to Miley Cyrus, Sandra Bullock and Kevin Hart, countless celebrities from across the country have publicly pitched in to help those affected by the hurricane.

Houston Texans star J.J. Watt organized the Houston Flood Relief Fund, which has soared above his initial goal of $200,000 to over $19 million since Aug. 29. He began distributing food and supplies to those in need on Sept. 3.

The Houston Astros have pledged to donate $4 million to the relief effort, and have also offered to use their spring training facilities as a location to send donations and collect goods to distribute to hurricane victims.

But those are not the only donations being made by athletes. Here is a comprehensive list of all of the professional athletes and teams that are lending a hand to the hurricane Harvey victims.

Twitter and other forms of social media have been the common medium to help the relief effort. Other than celebrities challenging one another to make donations, law enforcement and citizens have also used Twitter for PSAs and calls for help, respectively.

Hall, Butler’s softball coach, said seeing all of the efforts to help the hurricane victims in Houston has helped to bring our country together.

“I think this really shows the heart of Americans,” he said.