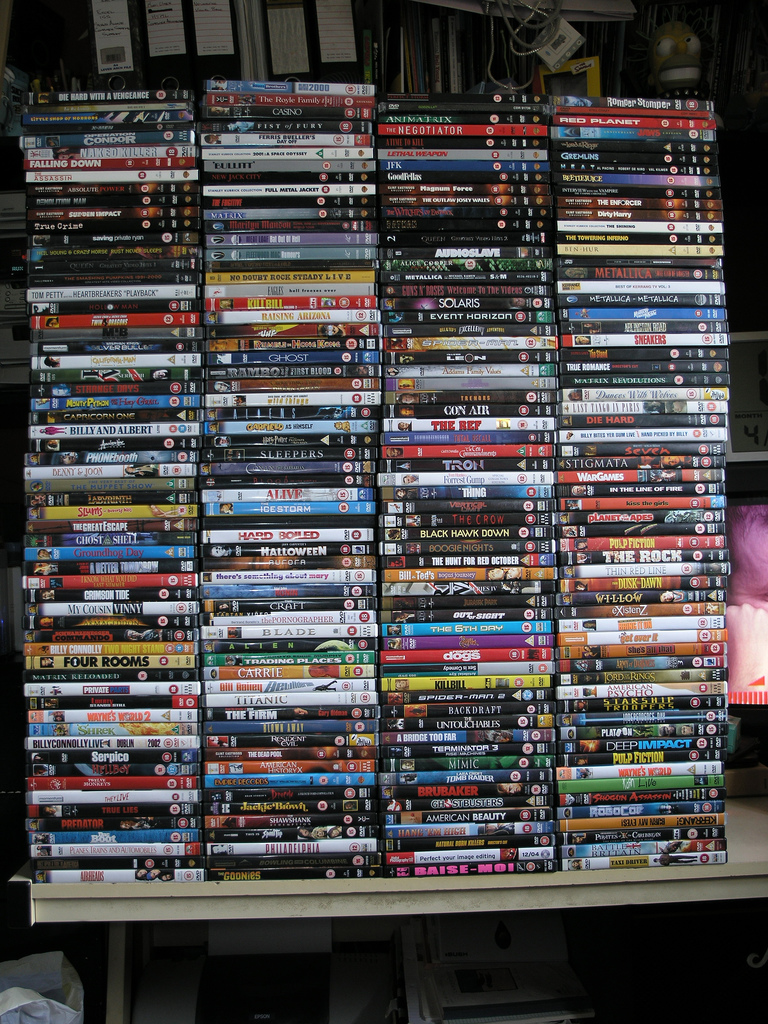 A large stack of movies. Photo via Wikimedia Commons.

Like all forms of great art, movies have the ability to elevate and enhance our lives. I realize that does sound awfully dramatic, but as a college-aged kid, I have found that movies can be a great way to realize how other people are going through similar experiences that I am. To honor the start of a new academic year, here is a completely objective and 100 percent infallible list of the five best movies about college kids.

Richard Linklater has made a career out of making critically-acclaimed movies centered around characters learning about themselves at crucial crossroads in their lives. From “Dazed and Confused” to the “Before Trilogy,” Linklater has found his niche in introducing his audience to characters they can’t help but relate to and sympathize with. His 2016 film “Everybody Wants Some” holds true to this pattern. Centered around a baseball team at a fictional university in 1980 Texas a few days before the start of a new school year, the movie follows a slew of characters as they go about their day-to-day lives. While it lacks a traditional concrete plot, there are few movies that better show the fear but also overwhelming excitement that accompanies starting this new period in your life. It is funny and emotionally resonant, often in the same breath.

Although this movie is technically about a student who has recently graduated from college, wondering what to do next with his life, its message remains relatable for any college student. This 1967 classic perfectly projects the sense of haplessness many college students feel at one point or another when they start to think about their future. While the film does have its comedic moments, it is overall a more serious and nuanced look at the mind of a college student than many other films in the sub-genre. Plus, the soundtrack is just fantastic.

I am not absolutely sure, but I am pretty certain there is some sort of law that if one mentions “movie” and “college” in the same sentence, one must refer to Animal House is some way. While some other college movies focus on the idea of starting a new stage in life or trying to figure out a plan for your future, the 1978 comedy about a wild fraternity focused on the part of college most students have likely thought about: partying. It is a film filled with big laughs and a big heart, and for a campus like Butler, which has so much Greek Life, it rings especially true. You can thank it for paving the way for future comedy staples such as Old School and Neighbors.

As one of the more serious entries on this list, Adventureland is a fantastic film about growing up and confronting your future. While it shares similar themes with other movies on this list, it is still a wholly original movie. Centered around a college student the summer before he begins graduate school, the film follows him around as works at a theme park in his hometown. He finds love and learns what it means to make decisions that have a lasting impact on his future.

This is one of the less traditional college movies, but remains one of the best. The movie tells the story of a MIT(Massachusetts Institute of Technology) janitor who possesses an incredible intelligence. The film follows the janitor as he tries to drag himself out of a cycle of poverty and violence so that he may access his full potential. It is more dramatic than comedic, but it holds up after multiple viewings, and is essential for any college student looking for inspiration.

It is true that movies do not often perfectly reflect life. There are parts of all these movies mentioned have parts that are not super realistic. Despite this, seeing the experiences you have lived through, the feelings you have felt portrayed on-screen can be a really cool and really helpful experience.