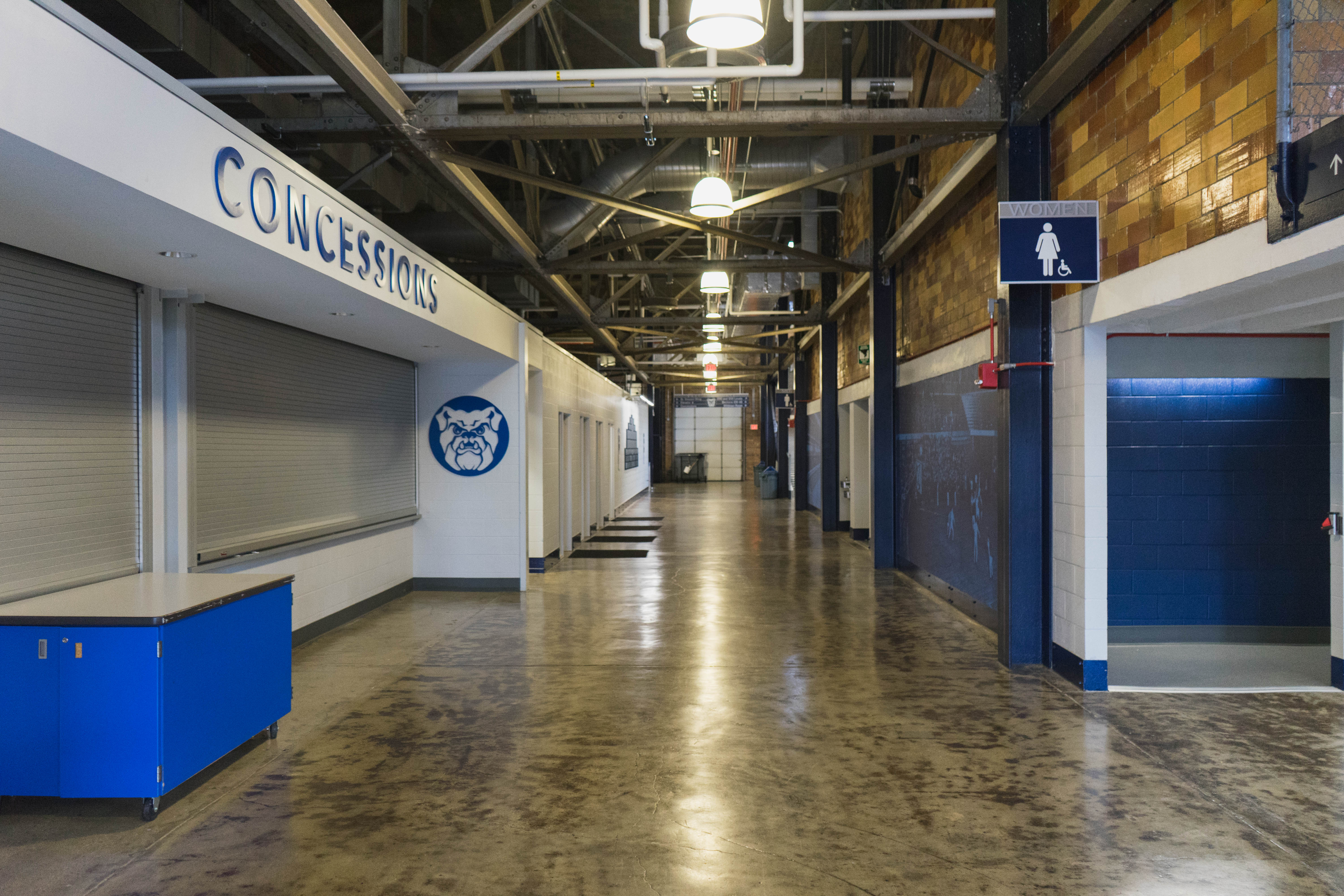 Concessions inside of Hinkle Fieldhouse. Photo by Adam Cvik

College athletics have been moving toward the selling of alcoholic beverages at sporting events.

Purdue University announced this summer that they too will be expanding their beer and wine sales at both their basketball and football arenas in the upcoming seasons. Alcoholic beverages had been available previously in premium seating sections, but now will be available at both venues. However, they will not be in the concession stands near the student sections, in an attempt to keep alcohol out of the hands of underage students.

CBS Sports’ Dennis Dodd reported that at college sporting events, especially football games, selling alcoholic beverages is becoming increasingly common across the country. West Virginia University was one of the first schools to allow alcohol inside of their stadium in 2011. In 2016, the College World Series sold alcohol at the games.

Many schools sell alcohol to cut down on binge drinking before the game — if fans know that alcohol will be available to them in the stadium, then they will drink less before the game.

The downside to selling beer and wine at games are the dangers of having over-served or unruly fans in attendance and the prospect of accidentally getting alcohol into the hands of underage students.

Some conferences, such as the Southeastern Conference have a conference-wide policy banning the sale of alcohol at sporting events. But even the SEC, whose alcohol ban goes back more than three decades, has considered altering the policy to cut down on binge drinking outside the stadium during pre-game festivities.

The Big East does not have a conference-wide policy on the sale of alcohol at games, and even sells alcoholic beverages at the men’s basketball tournament in New York every spring.

Pam Flenke is the assistant commissioner of women’s sports media relations for the Big East Conference. She said via email that the Big East does not control whether or not schools within the conference sell alcohol at sporting events and that the decision is up to each individual school.

The list of schools that have adopted the selling of alcoholic beverages at games grows every year. In 2016, 36 schools across the country sold alcohol in their entire football stadium, and for some, it was a huge money maker. The University of Texas made $1.8 million from alcohol sales in 2016.

The Indy Star reported the Indianapolis Colts sold more beer than any other concession stand item. In the 2014 season, they reportedly sold more than $4 million worth of beer alone and made nearly $6 million in total alcohol sales in 11 home games. This included two preseason games and one postseason game. Forty-eight percent of sales go back to the Colts, while the other 52 percent goes toward the employee’s salaries, purchasing goods, commission and other operations.

Lucas Oil Stadium has a capacity of 70,000 fans, and the Darrell K. Royal-Texas Memorial Stadium at the University of Texas-Austin has a capacity of more than 100,000, far more than any venue on Butler’s campus. The Bud and Jackie Sellick Bowl — formerly the Butler Bowl — and Hinkle Fieldhouse can hold 5,647 and 9,100 respectively. But Butler’s venues host many more than 11 events every year.

Sophomore pre-pharmacy major Zach Madere believes that Butler should start selling alcohol at sporting events because of how synonymous alcohol has become with sports.

“You go to so many other sports stadiums and see that they have beer, and I feel like it just goes with the game,” Madere said.

Madere, who turns 21 next September, thinks there are some small issues with the idea of selling beer at games, such as how to keep from selling to minors, and the cleanup of the stands after the game.

“I don’t think it would be that hard to watch out for the irresponsible or the underage,” Madere said. “The cleanup if someone spills might suck, but that’s just how all stadiums are. Overall, I think it is a good idea.”

“I just went to a Cubs game a few weeks ago and the drinks were ten dollars,” Usyak said. “It’s super expensive, but once they get you in there, you’re gonna pay for it.”

Despite the broke-college-student stereotype, Usyak thinks that Butler students who are 21 would still purchase expensive drinks at sporting events.

“I have a feeling that just because of the certain matchups that there are, people would want to buy and being broke wouldn’t be a concern,” Usyak said.

With football season quickly approaching, Butler fans likely will not be able to enjoy their favorite adult beverage this fall; but, as more schools start turning to alcohol sales for extra revenue, the Dawgs have yet to decide to jump on board.